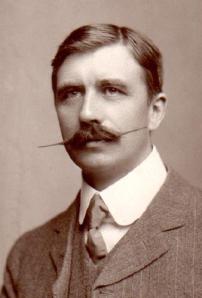 A visit to the past again this week – in search of another president.  Prompted by the arrival this morning of a small bundle of old book catalogues – seven catalogues published in the interwar period by P. M. Barnard of 17 Church Road, Tunbridge Wells.  Stylish, elegant, varied, precise, bibliographically punctilious – and full of interesting books at prices (eighty years on) to make us weep.

They are the work of the Reverend Percy Mordaunt Barnard, who became President of the ABA in 1928.  His is an unusual tale.  Born at Heacham in Norfolk (just south of the red cliffs of Hunstanton) in 1868, he was the son of the Reverend Mordaunt Barnard, who in 1866 (at the age of seventy-one) had taken as his second wife his first cousin once removed, the thirty-two year old Adelaide Sophia Barnard.  Inter alia, Mordaunt Barnard also produced The Odyssey of Homer Rendered into English Blank Verse in 1876. 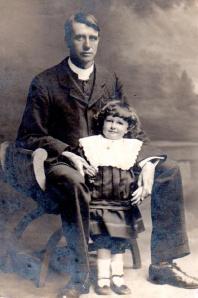 Brought up in Hove and Hastings on the south coast, Percy Barnard, a member of the Christ’s College rowing eight, took a first at Cambridge (Classical Tripos) in 1890, later becoming an examiner for the Theological Tripos.  He was an assistant master at St. John’s College, Leatherhead, from 1892, became ordained in 1896 and served as the college chaplain.  He produced editions of Clement of Alexandria in 1897-1901 and in 1898 became the rector of Headley in Surrey (midway between Epsom and Dorking).  In February 1900, he married Alice Mary Taunton (1872-1951), daughter of the Reverend Frederick Taunton, vicar of Kingswood, and his wife, Flora Charlotte Wild. 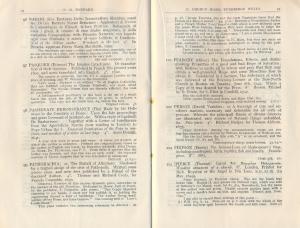 To make us weep

He produced Jezebel : A Drama in 1904 (priests of Baal and Ashtoreth, chorus of boys and maidens, Elijah, Ahab, Jezebel, etc.).  Although there would appear to be no copy of this in any major UK library, his family still have one.  He was a candidate for for the Gresham Lectureship in Divinity in that same year, but then, in his late thirties, he appears to have had a crisis of faith.  According to his daughter’s autobiography (Nea Morin, A Woman’s Reach : Mountaineering Memoirs 1968), in trying to persuade his wife back to the faith, he lost his own.  Feeling that he could no longer teach what he had ceased to believe, he gave up the church and became an antiquarian bookseller.

He appears briefly to have begun his new career in Saffron Walden, but by 1907 he was ensconced in Royal Tunbridge Wells, where he remained for the rest of his career.   There was also briefly a second branch at 85 Bridge Street, Manchester.  He cast a final glance at his earlier life with the publication of The Interpretation of the New Testament in Modern Life and Thought (1909), and still described himself as a clerk in holy orders on the 1911 Census, but with his Facsimiles from Early Illustrated Books, printed at the Chiswick Press  (1910), his life had become one devoted to the world of rare books – and rare prints too.  The celebrated printselling firm of “Craddock & Barnard” was established by his wife Alice Mary Barnard in 1915, issuing parallel catalogues from that year onwards.  It is generally said that there never was a “Craddock” involved in the business, but family tradition suggests that this was in fact the pseudonym of a university don reluctant to be seen engaging in ‘trade’.  An obscure announcement in the London Gazette of 5th January 1917 that a certain Alexander Gordon Wynch Murray had relinquished his partnership in the business almost certainly provides the truth of this – Murray (1884-1919) was a former bookseller who had become librarian of Trinity College, Cambridge.  It is not inconceivable that he had worked for P. M. Barnard at one time.

The Barnard catalogues, stylish, elegant, varied, precise and bibliographically punctilious, are monument enough to a highly skilled bookseller, but we can add that he sold the Vernon Dante Collection to the John Rylands Library in 1914 and that the P. M. Barnard Collection of Deeds now resides at the National Library of Wales.  An annotated run of the catalogues, bound into five volumes, remains in the family to the present day. 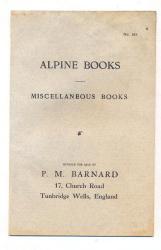 Barnard was a keen mountaineer and a member of the Alpine Club (there is a brief report of a new route he climbed in Switzerland in the 1899 Alpine Journal).  He produced specialised catalogues on the subject and left a permanent mark on his family.  His daughter’s  autobiography recalls family holidays in the Swiss and Austrian Alps, while Nea, whose husband Jean Morin was killed fighting with the Free French in 1943, herself became President of the Ladies’ Alpine Club. Her daughter Denise in turn married Sir Charles Evans, the Everest and Kanchenjunga mountaineer, and she became first woman President of the Alpine Club. 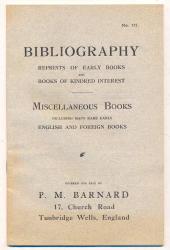 Desmond Flower, writing in The Private Library in 1963, recalled going to visit Percy Mordaunt Barnard as a schoolboy to buy a book from a catalogue some forty years earlier: “He was rather like Mr Pastry: he had a purple face, a grizzled moustache stained with nicotine, and he looked at one over the top of his glasses.  In a kindly way he asked me what I wanted and I told him. He looked at me over those glasses again and said: ‘My boy, let me give you a word of advice.  Do not collect books.  Buy instead drawings of the old masters; they will cost you little and you will never regret it’.  I gazed back with a patronizing smile and said: ‘Thank you, sir; I will bear that in mind. Now might I have No. 156?’  He sighed and found it for me.  Of course he was right; if I had taken his advice I would today be a wealthy man”.

Percy Mordaunt Barnard died at Denbigh Mental Hospital in Denbigh on the 1st April 1941. The length and severity of his mental illness has not been established.  Administration of the estate was granted to his son Osbert Howard Barnard and his married daughter, Nea Everilda Morin.  Already a partner in the “Craddock & Barnard” arm of the business, which had moved to London some years earlier, first to an address off Tottenham Court Road and then to Museum Street, opposite the British Museum, Osbert Howard Barnard took over the business on the retirement of his mother in August 1941.  He was joined in the business at this time by his elder brother Charles Mordaunt Barnard, originally a dyestuffs chemist, who took charge of the cleaning and restoration side of the operation.  Osbert Barnard ran “Craddock & Barnard” until his death in 1985.  He bequeathed the business to his long-term assistant, Audrey Gibbs, who later passed on the name and goodwill to Christopher Mendez.

This post originally published 9 August 2012, revised 3 January 2013, in the light of additional information and family photographs received from John Mordaunt Barnard, to whom full acknowledgement and many thanks.

Laurence Worms has owned and run Ash Rare Books since 1971. He represented the antiquarian book trade on the (British) National Book Committee from 1993 to 2002 and has been six times an elected member of the Council of the Antiquarian Booksellers’ Association. He was largely responsible for drafting the Association’s Code of Good Practice first introduced in 1997 (and its recent update), served as Honorary Secretary of the Association from 1998 to 2001 and as President from 2011 to 2013. He is a former member of the Council of the Bibliographical Society and continues to serve on the Council of the London Topographical Society. He writes and lectures on various aspects of the history of the book and map trades, and has lectured at the universities of Cambridge, London, Reading and Sheffield, as well as at the Bibliographical Society, the Royal Geographical Society, the Warburg Institute, the National Library of Scotland and at Gresham College and Stationers' Hall. Published work includes the compilation of fourteen ‘lives’ for the “Oxford Dictionary of National Biography”, a number of articles for “The Oxford Companion to the Book” and the chapter on early English maps and atlases for the fourth volume of “The Cambridge History of the Book in Britain”. Essays on the British map trade are also appearing in “The History of Cartography” published by the University of Chicago Press. His long-awaited “British Map Engravers”, co-written with Ashley Baynton-Williams, was published to critical acclaim in 2011. He also contributed the numerous biographical notes to Peter Barber’s hugely successful “London : A History in Maps”, co-published by the British Library and the London Topographical Society in 2012.
View all posts by Laurence Worms - Ash Rare Books →
This entry was posted in Booksellers and tagged ABA Past Presidents, Nea Morin. Bookmark the permalink.