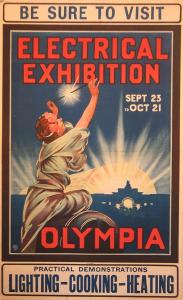 I was asked yesterday at the ABA Council meeting if I could institute a live Instagram feed for next week’s Olympia Book Fair, synchronised to the Fair’s Twitter and Facebook accounts.  Or something along those lines, anyway.  What sort of question is that to ask an old age pensioner, I thought to myself – but then looking round the table it seemed reasonably clear that I was the only person there (including , I very strongly suspect,  the person who asked) who had the vaguest idea what the question meant.  The answer obviously is, No I couldn’t – Don’t be silly – but I do know a young woman who could, so if you are a devotee of such things, it may well come to pass.

Only in the ABA of course would an old age pensioner be put in charge of the Fair’s social media output.  As I was told off last year for reporting on the Fair before the official press release had been prepared and I had been told what I was supposed to say, I thought I would pre-empt matters this year and write a report before the Fair even opens.  If you want instant and Instagram, let’s go one better and have pre-instant.  Here’s my report of an event that hasn’t happened yet.

The Fair of course is only part of what has come to be known as London Rare Book Week.  A generous week, as it lasts eight days,  and an abundant week, as it includes seven separate fairs dotted around different parts of London.  The calculation is that more than six hundred exhibitors are involved – it must surely be the world’s biggest celebration of rare and collectable books and all the allied matter that goes with them – maps, prints, manuscripts, photographs, ephemera, etc.  It has become the ultimate unmissable week in the calendar of the rare book world.

It all kicks off next Sunday (May 18th) with the Bloomsbury Summer Book Fair at the Royal National Hotel – over 120 dealers there, while round the corner at the Holiday Inn, the Ephemera Society will be holding its Summer Special Fair.

On Wednesday and Thursday (May 21st-May 22nd) there is a two-day book fair at the Hand and Flower, just over the road from Olympia.  The main event, the ABA’s three-day London International Antiquarian Book Fair, as it’s formally called, with somewhere around 180 exhibitors, opens at Olympia’s National Hall at 2pm on the Thursday (May 22nd).  Opening hours are 2pm-8pm on the Thursday, 11am-7pm on Friday and 11am-5pm on Saturday.

On the Friday and Saturday a free shuttle bus from Olympia will happily ferry you on to the Provincial Booksellers’ Fairs Association’s own international event at the ILEC Conference Centre – over 100 more exhibitors there.  And if you have the stamina and the money still to spend, the week ends back in Bloomsbury with the Bloomsbury Ephemera Fair at the Royal National Hotel and the London Photograph Fair at the Bloomsbury Holiday Inn. 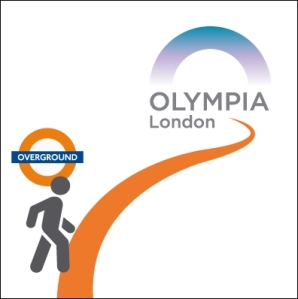 These are all fine and worthy events, and I hope to get round and buy things at most of them, but it’s Olympia that really catches the imagination.  I’m looking forward to a record-breaking event, sales and numbers of visitors climbing to all-time highs.  One of the drawbacks of Olympia has always been the perception of its relative inaccessibility by public transport, but it does have its own railway station and now that the London Overground has been fully linked up it is much easier to get to than ever before.

And it’s well worth travelling to.  The sheer range and diversity of what is on offer, brought to us by the cream of booksellers from all round the world is just astonishing.  Here’s a copy of Martin Waldseemüller’s “Cosmographiae Introductio”  of 1507.  Exhibited at the fair by Daniel Crouch Rare Books, it is of course famous as the book which named America – here’s the passage in translation: “in the sixth climatic region, towards the Antarctic, are situated the extreme part of Africa, recently discovered, the Islands of Zanzibar, Java Minor and Seula, and the fourth part of the world which, since it was discovered by Amerigo[Vespucci], it is permissible to call ‘Amerigen’, that is, land of Amerigo or America”.  How utterly extraordinary that we can walk in off the street and meet this book – a book which would form the centrepiece of any exhibition on the Americas anyone might ever care to put on.  And not only meet it, but even, if your pockets are deep enough, buy it and take it home with you. 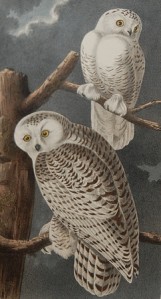 Staying with the Americas for a moment, here’s a copy of John James Audubon’s “The Birds of America” (Unsworth’s Antiquarian Booksellers), the first American edition, Philadelphia 1840-1844.  Five hundred of the most extraordinarily beautiful colour plates ever produced.  A copy once owned by Congressman Owen Jones of Pennsylvania (1819-1878), who fought in the Civil War, and which has remained in private hands ever since.

And staying with cosmography for a moment here’s a copy of Peter Apian’s “Cosmographia”, Antwerp 1540 (Librairie Pierre Coumans) – one of the most important geographical texts of the Renaissance, incorporating as it does the earliest printed description of triangulation.  It has its own importance in the history of the Americas, with an early description, but what is remarkable about this copy is that the four delicate and intricate paper volvelles are all still in perfect condition and working order.

Elsewhere we find another famous book in Renaissance science, the first edition in English of Giambattista della Porta’s “Natural Magic”, 1658 (Roger Gaskell Rare Books). “Porta was the first to give a coherent description of the camera obscura, and the first to report adding a concave lens to the aperture.  He also juxtaposed concave and convex lenses and reports various experiments with them. He was one of the first to suggest the combination of lenses to form a telescope or microscope”.

Perhaps not your thing, although how anyone could fail to want this I can’t imagine.  How about something a little different – this lovely English Restoration binding from H. M. Fletcher, “fully gilt with a large diamond lozenge centre-piece and corners made up of volutes, circles and dots and edged with drawer-handles, at each corner of the diamond lozenge a distinctive flower tool with two leaves, combed marbled endpapers, all edges gilt”.

Bindings of all kinds will be on display – here’s something spectacular: one of only forty-eight copies of the Kelmscott Chaucer (1896) “bound in white pigskin at the Doves Bindery under the supervision of T. J. Cobden-Sanderson to a design by William Morris …  with the original clasps, stamped ‘The Doves Bindery 1899’ on the lower turn-in, housed in a morocco backed clamshell box lettered on the spine in Chaucer type”.  Head to Sophie Schneideman Rare Books on Stand C01 to see this one. 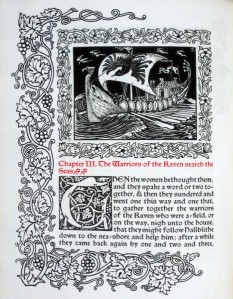 But if we like William Morris, which of course we do, here’s something else – this time from Knuf Rare Books – another Kelmscott, “The Story of the Glittering Plain” 1894, the illustrated edition with twenty-three wood engravings after Walter Crane. 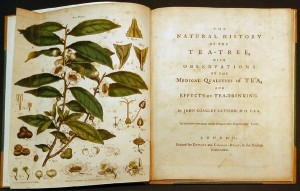 Everywhere we look there is something to admire, envy, covet, drool over.  I’m charmed by this, John Coakley Lettsom’s “The Natural History of the Tea-Tree, with Observations on the Medical Qualities of Tea, and Effects of Tea-Drinking” 1772 (Marrin’s Bookshop).  This is Lettsom the Quaker physician and philanthropist, founder of the Medical Society of London, co-founder of the Royal Humane Society, and the man unfortunately remembered in contemporary doggerel as:

Old literary favourites are to be found everywhere – here are a handsome first edition of the “Hound of the Baskervilles” 1902, from Bow Windows Book Shop, and a really rather nice copy of “The Invisible Man” 1897 from Aquila Books.  Jonkers Rare Books are

bringing this presentation copy of Frank L. Baum’s “The Wonderful Wizard of Oz” 1900, in the primary binding and inscribed by both author and illustrator – “in very many respects the ultimate copy of this book”.

If your taste runs a touch more modern than that, then here’s a delightful copy of James M. Cain’s “The Postman Always Rings Twice” 1934 (with a signed photograph of the author tucked inside) from Lucius Books, or a sparkling copy of  J. P. Donleavy’s “The Ginger Man” 1955 from Neil Pearson Rare Books – the first issue from, suitably enough, the Olympia Press, which took on the book after it had already been “rejected by upwards of thirty publishers on the grounds of obscenity”.

More modern still is an inscribed first hardback edition of Douglas Adams’ “The Hitch Hiker’s Guide to the Galaxy” 1979 – first state of the jacket of course(Hyraxia Books).

These are all known and desirable rarities and priced accordingly, but there is plenty at the fair to suit the more modest pocket.

I’m rather taken by these mid twentieth-century “Derrière le Miroir” magazines with artwork by Bazaine, Braque, Giacometti , Miro, etc., being brought to the Fair by Graham York Rare Books and by no means expensive.  If Graham has already sold them, as I fear he may have done, then track down Angus O’Neill on the Omega Bookshop stand – he probably has some.

And of course it’s not just books.  All manner of other things.  What about a myriorama? – yes it’s a word.  Look it up.  A simple device to produce endless differing landscapes.  Here are two: one from Susanne Schulz-Falster in its original box and another by John Heaviside Clark from Forest Books, also in its original box – “The 16 hand-coloured cards, each with a landscape view, when placed together form a single panoramic view which is capable of rearrangement to form a endless variety of differing scenes.

The subject typically shows a lake-shore with trees, figures, and animals in the foreground, island-castles and ships in the middle distance, and a background of mountains. It is claimed that Clark’s set of sixteen cards are capable of 20,922,789,880,000 permutations”.

As if all these treasures and many more were not enough, there are also guided tours, events and demonstrations, “free, fun and fascinating” workshops and special activities for children, and so much more.  All the details at http://www.olympiabookfair.com/.

Laurence Worms has owned and run Ash Rare Books since 1971. He represented the antiquarian book trade on the (British) National Book Committee from 1993 to 2002 and has been six times an elected member of the Council of the Antiquarian Booksellers’ Association. He was largely responsible for drafting the Association’s Code of Good Practice first introduced in 1997 (and its recent update), served as Honorary Secretary of the Association from 1998 to 2001 and as President from 2011 to 2013. He is a former member of the Council of the Bibliographical Society and continues to serve on the Council of the London Topographical Society. He writes and lectures on various aspects of the history of the book and map trades, and has lectured at the universities of Cambridge, London, Reading and Sheffield, as well as at the Bibliographical Society, the Royal Geographical Society, the Warburg Institute, the National Library of Scotland and at Gresham College and Stationers' Hall. Published work includes the compilation of fourteen ‘lives’ for the “Oxford Dictionary of National Biography”, a number of articles for “The Oxford Companion to the Book” and the chapter on early English maps and atlases for the fourth volume of “The Cambridge History of the Book in Britain”. Essays on the British map trade are also appearing in “The History of Cartography” published by the University of Chicago Press. His long-awaited “British Map Engravers”, co-written with Ashley Baynton-Williams, was published to critical acclaim in 2011. He also contributed the numerous biographical notes to Peter Barber’s hugely successful “London : A History in Maps”, co-published by the British Library and the London Topographical Society in 2012.
View all posts by Laurence Worms - Ash Rare Books →
This entry was posted in ABA, Book Collecting, Book Fairs, Booksellers and tagged ABA, Book collecting, Ephemera, Modern First Editions, Olympia Book Fair. Bookmark the permalink.