I know that some of you appreciate and enjoy the occasional post I put up both here and on the ABA website about various past presidents of the ABA (at least one person has told me so).  What you may not know is that the past presidents aren’t in fact all long since deceased and that the surviving ones all have an annual lunch together.  This year, as the most recent of that number, it fell to me to issue the invitations.  This is in itself was an agreeable wander down Memory Lane. 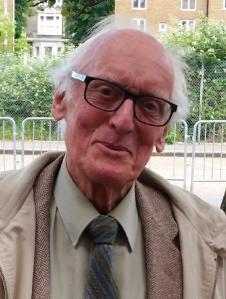 To take them in order of seniority, Martin Hamlyn was president in 1972-1973.  Well up in years now and unable to attend the lunch, but he is still living in Stamford.  He sounded chipper enough on the telephone when I spoke to him and sends his good wishes to everyone.  John Lawson, president in 1976-1978, and another who has not yet embraced e-mail, had to pull out of the lunch at the last minute.  It was his 82nd birthday last week and his family had hijacked him for a surprise outing.  Family always comes first, obviously, but a treat as always to bump into him in the queue at Olympia the other day.  Here he is – still keen as mustard, he had already bagged a couple of purchases from the Hand & Flower fair over the road.  Best wishes from him as well.

Another who regrettably couldn’t make it was Raymond Kilgarriff, president in 1978-1980.  He also had a family engagement, but sad that he had to miss the annual lunch for what was probably the first time.  He tells me he can remember one of them held in Oxfordshire at which the great Sir Basil Blackwell (born in 1889 and president in 1925-1926) was the host – it’s a priceless memory spanning almost the entire history of the ABA and I have urged him to write it up for us.

Keith Fletcher was president in 1982-1984 and was the most senior of the company when we assembled at Simpson’s in the Strand last Sunday for the 2014 lunch.  He and his wife Marina were both in good and entertaining form.  Clare Perkins (president 1984-1986) was unable to attend, but is now living in England again (Hampshire) after her sojourn overseas and sends her good wishes.  Senga Grant (president 1986-1988), now living in Dorset and a long way from her native Scotland, was in especially good form at our end of the table, with a fund of pleasing and occasionally downright indiscreet reminiscence.  Who would have thought that there were rival factions on the ABA Committee as far back as the 1950s, when her husband Ian became president for the first time?

David Brass (president 1990-1992) was exhibiting at Olympia last week, so I had a chat with him there, but he and his wife Caroline were long since booked on a thirty-fifth anniversary cruise and had to be somewhere rather more adjacent to the Mediterranean than Simpson’s by lunchtime on Sunday.  Peter Miller (president 1996-1998) and his wife Liza also couldn’t make it down, but Elizabeth Strong (president 2000-2001) could.  A pleasure to see her, as always.  She has just e-mailed to say how much she “enjoyed the company, the food, the delicious Sancerre and the elegant surroundings”.  All just as it should be.

Adrian Harrington (president in 2001-2003) and his wife Hermoine were also hijacked by a surprise family occasion – and old friends  Jonathan Potter (president 2003-2005) and his wife couldn’t make it up from Bath.  Robert Frew (president 2005-2007) had less far to come and was able to join us, as elegant as ever.  Julian Rota (president 2009-2011) and Dorothea were others who weren’t able to attend, and nor, unfortunately, could the presidential spouses customarily invited – Charlotte Bayntun-Coward, Colleen Vaughan, Shelia Minet and Jenny Shelley.  Best wishes from all of them.

A slightly disappointing turn-out in the end, we might have done better not to have tacked it on to Olympia, but we were joined by John and Sandy Critchley – appointed as sort of honorary past presidents by popular acclaim.  A toast was of course drunk to all our absent friends – and the food, the wine and the memories flowed.

Laurence Worms has owned and run Ash Rare Books since 1971. He represented the antiquarian book trade on the (British) National Book Committee from 1993 to 2002 and has been six times an elected member of the Council of the Antiquarian Booksellers’ Association. He was largely responsible for drafting the Association’s Code of Good Practice first introduced in 1997 (and its recent update), served as Honorary Secretary of the Association from 1998 to 2001 and as President from 2011 to 2013. He is a former member of the Council of the Bibliographical Society and continues to serve on the Council of the London Topographical Society. He writes and lectures on various aspects of the history of the book and map trades, and has lectured at the universities of Cambridge, London, Reading and Sheffield, as well as at the Bibliographical Society, the Royal Geographical Society, the Warburg Institute, the National Library of Scotland and at Gresham College and Stationers' Hall. Published work includes the compilation of fourteen ‘lives’ for the “Oxford Dictionary of National Biography”, a number of articles for “The Oxford Companion to the Book” and the chapter on early English maps and atlases for the fourth volume of “The Cambridge History of the Book in Britain”. Essays on the British map trade are also appearing in “The History of Cartography” published by the University of Chicago Press. His long-awaited “British Map Engravers”, co-written with Ashley Baynton-Williams, was published to critical acclaim in 2011. He also contributed the numerous biographical notes to Peter Barber’s hugely successful “London : A History in Maps”, co-published by the British Library and the London Topographical Society in 2012.
View all posts by Laurence Worms - Ash Rare Books →
This entry was posted in ABA, ABA Past Presidents, Booksellers and tagged ABA Past Presidents, Adrian Harrington, Clare Perkins, Davis Brass, Elizabeth Strong, John Lawson, Jonathan Potter, Julian Rota, Keith Fletcher, Martin Hamlyn, Peter Miller, Raymond Kilgarriff, Robert Frew, Senga Grant. Bookmark the permalink.

2 Responses to Past Presidents