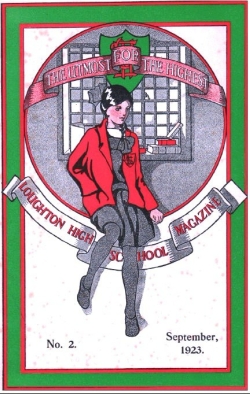 I noted in passing in the previous post that Frank Ford was first cousin to the children’s writer and illustrator Priscilla Mary Warner (1905-1994) – and as there does not seem to be a great deal of information about her out there either, I thought I might as well follow up with something on her. Once again, I am grateful to the Ford family for a great deal of help and encouragement.

Priscilla Mary Warner was born Priscilla Mary Ellingford at Forest Gate in East London on 2nd March 1905 – the youngest child and only daughter of Arthur Walter Ellingford (1862-1942) and his wife Edith Hays Keeler (1874-1964), a milliner, whom he had married in 1900.  Arthur Ellingford, once a master mason employing his own men, later became a foreman in a local de-silverisation factory, and later still an accounts clerk.

His daughter, named Priscilla after his mother, attended Loughton County High School for Girls.  Her earliest known published work is this cover she produced for the school magazine in 1923 – the same year in which she was awarded an Essex County Arts Scholarship.  From there she went to the Royal College of Art, becoming an Associate in 1926.  Her first recorded book-illustrations, those for Rosamund Essex, Stories of Missionary Saints, appeared the same year.  It was published by the “Junior Work Department” of the Society for the Propagation of the Gospel in Foreign Parts and there is seemingly no copy in the British Library. 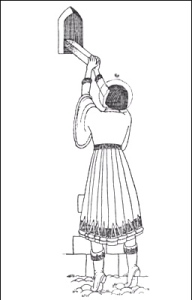 In 1931, she illustrated Eleanor Graham’s Welcome Christmas! Legends, Carols, Stories, Riddles, Etc., published by Ernest Benn.  The press was enthusiastic: “Anyone, young or old, who remembers the thrill of gathering Christmas holly in the woods, and the delicious rustling secrecy of wrapping up the family’s presents on Christmas Eve, will like Miss Eleanor Graham’s book.  Old stories and carols, legends of Christmas and the good Saint Nicholas, Christmas games (do children still play “General Post” and “London Street Cries”? — if not, why not?).  This is as attractive a Christmas pot-pourri as one could wish for.  The lively black-and-white illustrations by Priscilla M. Ellingford are plentiful and just right” (Yorkshire Post, 16th December 1931).

To my eye, there is a touch of the Eric Gill about her illustrations from this period – a style she was to repeat for Eleanor Graham’s High Days and Holidays: Stories, Legends and Customs of Red-Letter Days, again published by Ernest Benn, which came out the following year.

Her career seems to have been placed on hold for a few years when she married the Rev. Keith Stanley Warner (1903-1971) at West Ham in 1934.  A local man, he was a graduate of Leeds University and the couple were soon living at St. Saviour’s Vicarage, Arcadia Street, Poplar.  No doubt the life of a vicar’s wife in the pre-war East End brought challenges of its own. 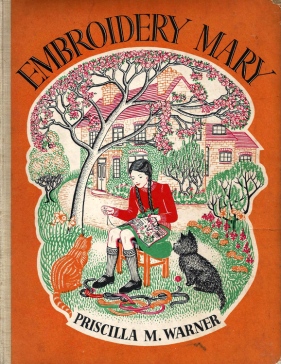 There followed spells in Reading and Ealing, but the marriage seems soon to have foundered and presumably ended in divorce.  Her husband was remarried to Vera Kathleen Deschampsneufs (talk about fresh fields and pastures new!), a nursery-school teacher, in 1943.

The most active and distinctive part of Priscilla Warner’s career as an author and illustrator began in the years following the war.  In 1948 she published both Biddy Christmas and Embroidery Mary.  The former, published by Basil Blackwell, is the story of a ten-year-old girl and her pretty grey donkey, Biddy, mixed in with some Bible legends and a message on the true meaning of Christmas. There was also an American edition, published by Doubleday in 1950.

Embroidery Mary, published by George G. Harrap, recounts the tale of a little girl who goes to stay with her uncle and aunt.  Her aunt teaches her needlework and embroidery step-by-step and the young reader is given beautifully illustrated lessons at the same time.  It remains hugely popular and sought-after in the needlework community and led to a number of more explicitly instructional publications, including Pictures and Patchwork, published at Leicester by the Dryad Press in 1950.  There were later editions reissued as Embroidered Pictures & Patchwork in 1960 and 1964 and there were also at least three Dryad Handicrafts leaflets – No. 136 – Embroidered Dresses for Children, No. 139 – Embroidery with Braid and Binding, and No. 141 – Embroidery for the Nursery.

Her Picture Come True (1951), again published by Blackwell, relates, I regret to say, the story of a failed bookshop.  A dream of escape to the country also fails, but the bookseller’s daughter’s drawing of the perfect little country house keeps hope alive.  This too had an American edition, published the following year.

Tessie Growing Up (1952) was again from Blackwell.  Blessed with generous parents, 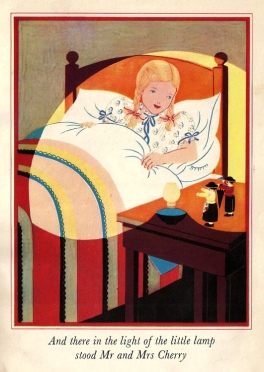 young Tessie buys a derelict gipsy caravan and restores it to its former glory as a play-house. The American edition, retitled Tessie’s Caravan, was published by Doubleday in 1953.  From 1952 onwards, the SPCK published some cut-out sheets of her work on religious themes, and in 1953 there were “cut-out folders” called The Advent House and Santa Klaus. A Christmas Play in 8 Scenes – the only copies of these I can trace are in the National Library of Scotland: I have not seen them and am not wholly clear about them.

Also published late in 1953 (although dated 1954) was the delightful Mr and Mrs Cherry from Harrap – a personal favourite in the family: 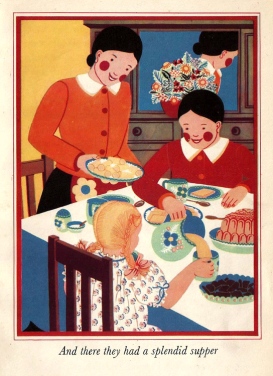 Ann was very fond of Mr and Mrs Cherry, and generally spoke to them when she passed by. Sometimes she thought that Mr Cherry winked …”. 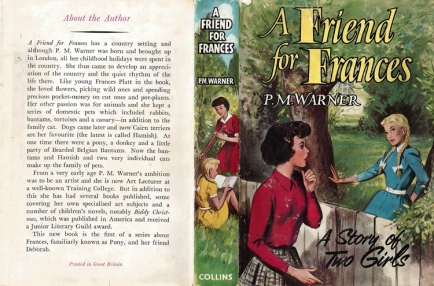 Franziska findet eine Freundin – and its sequel, If It Hadn’t Been for Frances (1957), both published by Collins – young girl from poor farming background wins place at High School, etc. – but these appear not to have her own vibrant illustrations.  This was certainly the case with her final book, The Paradise Summer (1963), again published by Collins, which was illustrated by Pru Seward.  It once again reiterates the countryside, family, farm, animal and friendship themes.

Priscilla Warner had moved to Ripon in Yorkshire in the 1950s and taught art at the local college.  Her elder brother, the Rev. (Harold) David Ellingford (1904-1988), was the vicar there, living at the vicarage with their mother – premises which she also shared from time to time.  She taught until her retirement after a period as head of the Art Department at Ripon College and in her retirement lived with her brother at nearby Masham.  She died on 27th January 1994 at Greenwell House Nursing Home at Bedale, aged eighty-eight.

My thanks are due once more to the Ford family, in particular Linden Ford, for most of the information and all of the pictures (except where noted) – and the Deschampsneufs joke.

For anyone interested in collecting, curating, or dealing in children’s books, there could be no better opportunity than attending this summer’s London Rare Books School course, Children’s Books, 1450-2000, being taught by my friend and colleague Jill Shefrin.  Full details can be downloaded from the link below.  (There are also a few places left on my own The Modern Rare Book Trade course).

Laurence Worms has owned and run Ash Rare Books since 1971. He represented the antiquarian book trade on the (British) National Book Committee from 1993 to 2002 and has been six times an elected member of the Council of the Antiquarian Booksellers’ Association. He was largely responsible for drafting the Association’s Code of Good Practice first introduced in 1997 (and its recent update), served as Honorary Secretary of the Association from 1998 to 2001 and as President from 2011 to 2013. He is a former member of the Council of the Bibliographical Society and continues to serve on the Council of the London Topographical Society. He writes and lectures on various aspects of the history of the book and map trades, and has lectured at the universities of Cambridge, London, Reading and Sheffield, as well as at the Bibliographical Society, the Royal Geographical Society, the Warburg Institute, the National Library of Scotland and at Gresham College and Stationers' Hall. Published work includes the compilation of fourteen ‘lives’ for the “Oxford Dictionary of National Biography”, a number of articles for “The Oxford Companion to the Book” and the chapter on early English maps and atlases for the fourth volume of “The Cambridge History of the Book in Britain”. Essays on the British map trade are also appearing in “The History of Cartography” published by the University of Chicago Press. His long-awaited “British Map Engravers”, co-written with Ashley Baynton-Williams, was published to critical acclaim in 2011. He also contributed the numerous biographical notes to Peter Barber’s hugely successful “London : A History in Maps”, co-published by the British Library and the London Topographical Society in 2012.
View all posts by Laurence Worms - Ash Rare Books →
This entry was posted in Book Collecting, Forgotten Artists, Forgotten Authors and tagged Biddy Christmas, Embroidery Mary, Priscilla Mary Ellingford, Priscilla Mary Warner. Bookmark the permalink.