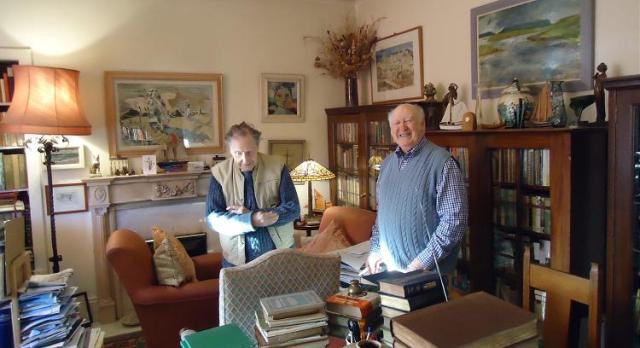 A fine Edinburgh morning – utterly clear and cloudless sky – sea bright and blue (you can just about see it from Elizabeth Strong’s kitchen window if you crane enough and stand on one leg).  Healthy breakfast with Elizabeth and her niece – muesli, nuts and some seedlike things I can’t quite identify (and about half a pot of the wonderful home-made marmalade).

I stroll up to see the boys at John Updike Rare Books.  Far too long since I’ve visited – over coffee we try to work out exactly how long.  Not entirely sure – but very good to see them again.  Really no idea how long Edward Nairn and Ian Watson have graced the book trade – but both bright as buttons still and no sign of retirement.  Indeed, to judge from the pile of fresh books which has just been passed to Nick Sherington to catalogue, the pace isn’t even letting up.  I’m torn between trying to get at the books before Nick does and utter fascination at what he’s typing away it – can it be, yes it is, it’s what we used to call a typewriter.  Not a computer in sight around here.

Yes, That is a Typewriter

Slightly reluctant to blog about this as the premises feature prominently on the book trade’s  highly classified map of secret places to find books which haven’t been, aren’t being, and won’t be listed on the internet.  You have to go there (by appointment) – or at least ask for one of their excellent printed catalogues and make your order (the books arrive in proper parcels of string and brown paper, individually wrapped and layered in delicate and origami-like folds of corrugated).  And when you get there, you sometimes have to be prepared to move furniture around, crawl behind armchairs, squeeze into improbable spaces, and generally do some more of the craning and standing on one leg to see everything.   Some of the best books are on the stairs, says Edward – I touch mischievously I thought as I ascended the stairs on hands and knees without finding anything to add to my pile.

But don’t for a moment think that anyone here is in any way out of touch.  The place is full of delightful books – always some you have never seen before, a caseful of choice books from the eighteen-nineties, a caseful of the rare and not quite forgotten first books of a whole range of authors, a caseful of signed modern firsts – including contemporary authors who can only have been born long after the boys started dealing.  I end up with a nice little stack of purchases – about enough to fill two boxes – but I seem to have lost track of time for a while.  When I emerge, it’s a completely different day – leaden, overcast and freezing.

Down the road and across the street to visit Alan Grant (Grant & Shaw Ltd).  Alan’s somewhat unusual in the book trade in actually having some sort of formal qualification (an MA in Bibliography and Textual Criticism from Leeds).  Originally intending to become a rare book librarian, he escaped into the headier world of dealing via stints with R. & J. Balding and Blackwell’s.  The stock is, as you might expect, genuinely and solidly antiquarian – scholarly, sober and serious.  A first edition of Tennyson’s Maud (1855), which I presently buy,  is about the most modern book there.  The books are carefully chosen and excellent examples – taste and discernment, quality not quantity.  I pick out a few more books – two from the Fasque House library of the Gladstone family – one at least that the Grand Old Man of British politics would have grown up with.  It warms in the hand in that knowledge. 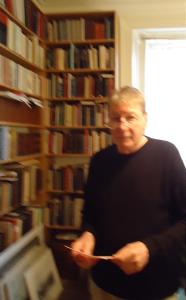 By the time Alan and I pop out to have some lunch it is pouring with rain – what happened to that fine and sunny morning?  And by the time we sit down to eat in a quiet Italian restaurant it is actually snowing.  A pleasant lunch – thank you, Alan.  Soup and sardines for me.  I resist his invitation to adjourn to the Oxford (the First Lady has given particular and very precise instructions on this point – she has never fully recovered from a night out with Alan and Cooper Hay at the Chelsea Arts Club), but wish him well, agree to see him again at the Edinburgh Book Fair in March, and take advantage of a break in the weather to wend my way across to McNaughtan’s Bookshop.

Watery sunlight as I walk across town.  I compliment Audrey, Elizabeth’s assistant, on the place looking tidier than I have ever seen it. 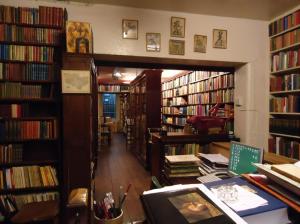 Half of it now turned into a gallery – with some of Elizabeth’s own paintings on view in the latest exhibition.  Proper old-fashioned second-hand bookshop – books on all subjects – modestly priced.  More expensive (but still modestly priced) books under lock and key.  Just looking at those when Sophie Schneideman breezes in – just in Edinburgh for the day, about to head off for the airport and acting slightly mysteriously. But evidently pleased with the outcome of her mission, whatever it may have been – a spectacular purchase? a magnificent sale?  Really don’t know.  I buy a book I wouldn’t have noticed had she not been looking at it.  (You will perhaps have noticed how another bookseller showing even a flicker of interest in a book always makes it that much more enticing).

Elizabeth returns from visiting her father and I present her with a large cheque (a little too large as it later turned out) and a small pile of books for posting on to me.  I can’t quite remember what I said to make her laugh so much – but obviously it wouldn’t have been an indiscreet comment about the ABA Council.  A good day’s work among some of the most pleasant people you could ever wish to meet. 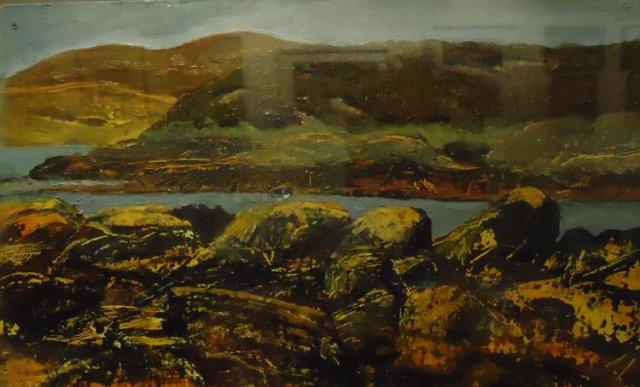 One of Elizabeth’s Tanera paintings – Note the Oystercatcher

Laurence Worms has owned and run Ash Rare Books since 1971. He represented the antiquarian book trade on the (British) National Book Committee from 1993 to 2002 and has been six times an elected member of the Council of the Antiquarian Booksellers’ Association. He was largely responsible for drafting the Association’s Code of Good Practice first introduced in 1997 (and its recent update), served as Honorary Secretary of the Association from 1998 to 2001 and as President from 2011 to 2013. He is a former member of the Council of the Bibliographical Society and continues to serve on the Council of the London Topographical Society. He writes and lectures on various aspects of the history of the book and map trades, and has lectured at the universities of Cambridge, London, Reading and Sheffield, as well as at the Bibliographical Society, the Royal Geographical Society, the Warburg Institute, the National Library of Scotland and at Gresham College and Stationers' Hall. He teaches annually at the London Rare Book School, University of London. Published work includes the compilation of fourteen ‘lives’ for the “Oxford Dictionary of National Biography”, a number of articles for “The Oxford Companion to the Book” and the chapter on early English maps and atlases for the fourth volume of “The Cambridge History of the Book in Britain”. Essays on the British map trade are also appearing in “The History of Cartography” published by the University of Chicago Press. His long-awaited “British Map Engravers”, co-written with Ashley Baynton-Williams, was published to critical acclaim in 2011. He also contributed the numerous biographical notes to Peter Barber’s hugely successful “London : A History in Maps”, co-published by the British Library and the London Topographical Society in 2012.
View all posts by Laurence Worms - Ash Rare Books →
This entry was posted in ABA Past Presidents, Book Collecting, Booksellers, Bookshops and tagged Alan Grant, Edinburgh, Edwrad Nairn, Ian Watson, John Updike, McNaughtan's Bookshop. Bookmark the permalink.