Best story of the week was Ed Bayntun-Coward’s recollection of his encounter with a glamorous woman at a party.  She asked what he did for a living.  Ed replied smoothly that he was an antiquarian bookseller – “What a contraceptive”, she responded, immediately turning on heel and walking away.

Quite how this formed part of his seminar on collecting book-bindings at Senate House the other night I can’t quite recall – but this was an excellent talk in what is developing into an outstanding series.   Informative, illustrated with some stunning images (still slavering over that Restoration binding from Ed’s own collection), mightily impressive learning lightly worn – and above all, fun.  Thank you, Ed, from all of those there – especially the librarian from the V&A, who was full of praise for the ABA and the Institute of English Studies for organising the series and promises to return with even more of her colleagues next month (Paul Goldman on Collecting Pre-Raphaelite Books – Tuesday 12th June).

Ed’s account of a client who has put together a collection of examples of bindings made for some of those great country house libraries, now dispersed and never to be reassembled, gave me pause to think.  An interesting, unusual and charming idea – and, as Ed pointed out, a collection that could still be put together at no overwhelming expense.  I imagine that most of us will have handled plenty of these waifs and relics of a lost age over the years.  There’s at least one sitting right now on my shelf (multiple shelves if we are being honest) of books awaiting cataloguing. 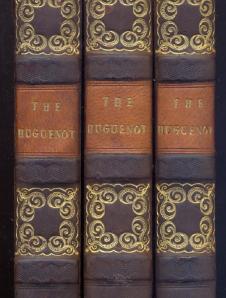 A little reluctant to admit to my commentator in chief, Mr Steve Liddle of Bristol, that it’s by a nineteenth-century writer of historical novels probably even more difficult to shift than Bulwer Lytton, but – hey, there we are.  Yes – it’s by the gone and almost entirely forgotten G. P. R. James – George Payne Rainsford James (1801-1860).  Known behind his back at the time as “The Solitary Horseman” in reference to his favourite opening trope.  A copy of the three-volume first edition of his The Huguenot : A Tale of the French Protestants (1839), written at the peak of a writing career in which he churned out a novel every nine months or so for eighteen consecutive years.  After that, his bubble to some extent burst – he migrated abroad, first to the United States.  He ended his days, somewhat given to depression and fits of rage, as the British consul in Venice.

As he wrote to a friend,  “Why is it that I write too fast for that slow beast the Public?  Is it because I rise earlier?  or because I do it every day and cannot do without it?  There are four and twenty hours in the day are there not?  Seven for sleep, four for dressing and feeding, four for reading, five for exercise and pleasure and four for writing.  I cannot write less than five pages in an hour, which gives at the above calculation six thousand pages in a year of three hundred days”.

The Huguenotwas popular enough in its day – a perennially popular theme in this country – and his four hours a day reading represented some fairly diligent historical research.

A contemporary review in The Gentleman’s Magazine speaks of “a succession of striking adventures narrated with great spirit and taste” and offers high praise for the heroine, La Belle Clemence, who “possesses virtues which ennoble her beauty”, while the hero Albert is drawn with much “attention to truth and nature”.  And here it is in a rather attractive contemporary binding, probably Scottish, of half calf, boldly tooled in the compartments and with some very delicate chevron-like waves in blind on the broad bands.  Inside there is the plainest of plain bookplates – a single engraved word, “Fasque”.

And here we have it – that great and still-standing mansion some miles to the north of Montrose sold to that merchant prince and not yet a baronet, Sir John Gladstone (1764-1851), for £80,000 in 1829.  Born in Leith, a fortune made from corn, sugar, cotton, shipping and real estate in Liverpool – and of course the father of the future four-times Prime Minister, William Ewart Gladstone (1809-1898).

We tend not to think of John Gladstone as a book-collector – although here’s his ownership inscription in another book published over forty years earlier, again from the Fasque library.  But whether he was a great reader or not – I somehow doubt it – the conventions of the time and his fierce political and dynastic ambition would have demanded all the appurtenances.  The house – and a fitting library.  The Huguenot was evidently bound in the style of the day to grace it – and grace it for many years it certainly did.  The remaining portions of the library were sold off by the Gladstone family as recently as 2008.

The book was published in 1839, the year that Macaulay first picked out the young William Ewart Gladstone as  “the rising hope of those stern and unbending Tories” in a review of Gladstone’s The State in its Relations with the Church, which was largely written at Fasque.  It was also the year that the future “People’s William” married Catherine Glynne

– and the couple spent most of the long parliamentary recesses at Fasque until the death of the increasingly demanding and bitter John Gladstone in 1851.

I can’t prove that either of them ever turned to G. P. R. James for a little light relief – but humour me in believing that they did.  W.E.G. wasn’t going to be reading Disraeli on his holidays after all.

Laurence Worms has owned and run Ash Rare Books since 1971. He represented the antiquarian book trade on the (British) National Book Committee from 1993 to 2002 and has been six times an elected member of the Council of the Antiquarian Booksellers’ Association. He was largely responsible for drafting the Association’s Code of Good Practice first introduced in 1997 (and its recent update), served as Honorary Secretary of the Association from 1998 to 2001 and as President from 2011 to 2013. He is a former member of the Council of the Bibliographical Society and continues to serve on the Council of the London Topographical Society. He writes and lectures on various aspects of the history of the book and map trades, and has lectured at the universities of Cambridge, London, Reading and Sheffield, as well as at the Bibliographical Society, the Royal Geographical Society, the Warburg Institute, the National Library of Scotland and at Gresham College and Stationers' Hall. Published work includes the compilation of fourteen ‘lives’ for the “Oxford Dictionary of National Biography”, a number of articles for “The Oxford Companion to the Book” and the chapter on early English maps and atlases for the fourth volume of “The Cambridge History of the Book in Britain”. Essays on the British map trade are also appearing in “The History of Cartography” published by the University of Chicago Press. His long-awaited “British Map Engravers”, co-written with Ashley Baynton-Williams, was published to critical acclaim in 2011. He also contributed the numerous biographical notes to Peter Barber’s hugely successful “London : A History in Maps”, co-published by the British Library and the London Topographical Society in 2012.
View all posts by Laurence Worms - Ash Rare Books →
This entry was posted in Bookplates. Bookmark the permalink.