Off to Mayfair again today to take a look at two rather different bookshops perched either side of Curzon Street.   On the south side, at no. 46, is the retail showroom of Shepherds, incorporating of course the famous old Sangorski & Sutcliffe bookbinding business.  As you might expect, all the emphasis is on fine bindings – new and not so new. 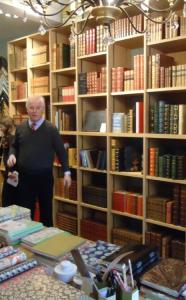 Rob Shepherd, incidentally doing a fine job as the new ABA treasurer, and his colleague Kim Pooley, bemoan the fact that the stock is looking a little thin – they simply sold so many books in the run-up to Christmas and the bindery is already at full stretch.  Nice problems to have, in a sense, but there are plans to move a lot of the gorgeous stationery, bookbinding accessories and so on, over to their new premises in Gillingham Street at Victoria and to concentrate on books here in Curzon Street.

The stock in fact looks fine to me – breadth, depth, interesting and beautiful things.  Not for the first time, I sense a real revival of collecting interest in fine binding.  Rob and Kim agree – the shop is going extremely well – and at least this is one market which can never be threatened by the e-reader.

And for those who insist on original condition, well the books still need displaying and protecting and the bindery these days is turning out more custom-made book-boxes for this purpose than ever.  But that isn’t really the point.  Books have always been finely bound for both practical and aesthetic reasons – let’s rejoice that here in central London is somewhere where such precise and individual craftsmanship is still celebrated and practised. 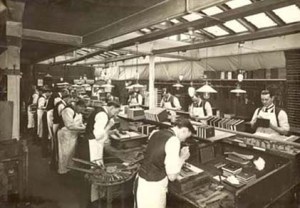 Rob’s engaged in writing a history of Sangorski & Sutcliffe, founded in 1901 by Francis Sangorski and George Sutcliffe, who met at bookbinding evening classes taught by Douglas Cockerell at the London County Council’s Central School of Arts and Crafts.  Within the next few years they became probably the most famous bookbinders in the world.

Binding designed by George Sutcliffe in 1914

Based on the firm’s intact if higgledy-piggledy archive, the history was originally intended to be a shortish promotional exercise: it’s now past 50,000 words and still growing, as more and more emerges about the bindery and some of its famous customers down the years – think Lawrence of Arabia, T. S. Eliot, George Bernard Shaw and more.  Rob’s going to give us a preview at the Senate House seminar next July,  where he will also explore the even older Zaehnsdorf bindery (also now absorbed into Shepherds) and the Arts & Crafts binding movement in general.  We shall all look forward to that.

Resident in Curzon Street much longer and directly across the road at no. 10 is the legendary  Heywood Hill bookshop. 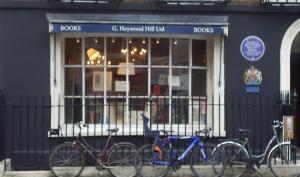 Quite at what point a bookshop ceases to be just a shop and becomes an institution is difficult to pin down – but it’s a point that Heywood Hill has certainly long since passed.  Booksellers to the Queen of course – the royal arms outside the door – and to say that it is next door to Trumper’s probably tells you with a fair degree of precision exactly where it stands in the subtle world of the more oblique English measures of status.  And talking of oblique measures, it was of course Nancy Mitford, who used to work here at Heywood Hill, who introduced us to the thoughts of Alan Ross on U and non-U vocabulary.

They are having a splendid 40% off sale at the moment, but of course, being Heywood Hill, it’s not called a sale but a “rummage”.   Do go – a whole roomful of the older stock at discounted prices, you really won’t miss the two carrier-bags full I’ve already taken away.  Books once owned by Edward Heath, Hugh Trevor-Roper, A. L. Rowse and others.

They sell new books as well as old, delightfully mixed up – the new books, as always, perfectly chosen.  Just the books that we all like, that they like, that they know their customers will like.  It’s easy to get the impression that not only have the staff read them all but are on first-name terms with their authors too.  A very English stock.  The older books strong on literature, history, architecture, biography and travel – oodles of Patrick Leigh Fermor, James Lees-Milne, Nancy Mitford of course – you get the picture – some good early John Buchan in at the moment and Agatha Christie too.  A whole roomful of favourite children’s book downstairs.  Stacks of books with their customers’ name-tags waiting to be collected or despatched.  And of course they seem to know all their customers’ names as well.

In a world where these things mattered, not to have an account here would probably be as grave a social solecism as anyone with aspirations to a place in English society could commit.  A bookshop with a very definable cachet.

But don’t get me wrong – grand traditions, certainly some grand customers, but the place itself isn’t grand at all.  No pretensions.  I love it.  There are plenty of smarter shops – but not many anything like as friendly or as individual.  It’s just a rattling good bookshop, perfectly in tune with anyone who likes good books, and run with impressive grace and efficiency.

Laurence Worms has owned and run Ash Rare Books since 1971. He represented the antiquarian book trade on the (British) National Book Committee from 1993 to 2002 and has been six times an elected member of the Council of the Antiquarian Booksellers’ Association. He was largely responsible for drafting the Association’s Code of Good Practice first introduced in 1997 (and its recent update), served as Honorary Secretary of the Association from 1998 to 2001 and as President from 2011 to 2013. He is a former member of the Council of the Bibliographical Society and continues to serve on the Council of the London Topographical Society. He writes and lectures on various aspects of the history of the book and map trades, and has lectured at the universities of Cambridge, London, Reading and Sheffield, as well as at the Bibliographical Society, the Royal Geographical Society, the Warburg Institute, the National Library of Scotland and at Gresham College and Stationers' Hall. He teaches annually at the London Rare Book School, University of London. Published work includes the compilation of fourteen ‘lives’ for the “Oxford Dictionary of National Biography”, a number of articles for “The Oxford Companion to the Book” and the chapter on early English maps and atlases for the fourth volume of “The Cambridge History of the Book in Britain”. Essays on the British map trade are also appearing in “The History of Cartography” published by the University of Chicago Press. His long-awaited “British Map Engravers”, co-written with Ashley Baynton-Williams, was published to critical acclaim in 2011. He also contributed the numerous biographical notes to Peter Barber’s hugely successful “London : A History in Maps”, co-published by the British Library and the London Topographical Society in 2012.
View all posts by Laurence Worms - Ash Rare Books →
This entry was posted in Book Collecting, Booksellers, Bookshops and tagged Curzon Street, G. Heywood Hill, Sangorski & Sutcliffe. Bookmark the permalink.

2 Responses to Rummage in Curzon Street