I suppose the fact that it’s staged on a racecourse always lends a certain speculative zest to the York National Book Fair. I always tend in any case secretly to feel that buying a book for hoped-for resale at a profit is rather like taking a punt on a horse – the odds by and large less enticing, but the chances generally a touch better, knowledge more certain. These days of course an increasing factor in picking out a winner is whether I can squeeze a blog-post out of it as well, which led to some even more erratic purchases than usual at this year’s fair, not least yet another Bulwer Lytton (at probably less than even money). Bound by a highly-skilled and virtually undocumented provincial binder – you will read about it here at some future point. Elsewhere there was a bound volume of mid nineteenth-century catalogues from an interesting Liverpool bookseller I’d already marked down as a future topic. That too we can bill as ‘forthcoming’.

As to the fair overall, what can I add to previous reports? The usual overwhelming number of books and booksellers – the largest fair of its kind in all Europe – so many old friends, so much gossip to catch up on, so many visitors, so much to excite. Record takings of well over half a million pounds overall. Happy faces. Such an enormous credit to all concerned. It’s a fair that no-one can afford to miss.

But it was one speculative punt (at what I hope are pretty good odds) that set the pulse racing, brought the memories flooding back. Rooting around upstairs on the second day, I picked up a nondescript object in marbled guards, evidently a folding map of some sort. I partially opened it up and was immediately struck by a splash of bright pink highlighting a plot of land just across the way from Tattenham Corner on Epsom Race Course – that tight left-hand bend and test of jockeyship which is probably the most famous turn on any racecourse anywhere.

My dear departed father was something of a racing man. Put frankly, he liked a bet. It was privately felt in the family that the only reason we had a telephone in the house was so that he could get through on a private line to his ‘turf accountant’ in those far-off days when off-course betting was all but illegal. Certainly it was rarely used for any other purpose. He always claimed that it was ‘just a bit of fun’ for small stakes – we were never quite so sure.

The real treats of my boyhood were to accompany him on Saturday afternoon expeditions to the suburban tracks of outer London – Kempton, Hurst Park (yes, I know it closed down fifty years ago), Sandown. Sometimes proceedings were enlivened by the presence of my slightly raffish Uncle George, who somewhere along the way of his life had picked up a perfect command of the sign-language of the white-gloved tic-tac men. He could interpret their hand-signals and effortlessly predict a sudden blur of activity as the bookmakers wiped their boards and chalked up fresh odds in the face of a heavy wager elsewhere on the course. He taught me most of it (forgotten now, save the obvious flick to the nose for ‘on the nose’) – enough for us both to laugh out loud one day when a tic-tac man wholly ran out of vocabulary and resorted to a pantomime shovelling motion to express the weight of late (and probably all too well informed) money coming in on an unfancied outsider.

My father was a very good judge of the points of a horse, something I found curious in a thoroughly urban man brought up in the purlieus of Drury Lane and the Gray’s Inn Road. The countryside didn’t really interest him at all unless converted into a racecourse or a well-manicured golf-course. It was only later I discovered that his maternal grandfather (and indeed his father before him) looked after horses and drove hansom-cabs in the foggy London days of Dickens and Sherlock Holmes – until of course made as redundant as the tic-tac men by the coming of the horseless carriage. He also had a prodigious memory and a near encyclopaedic knowledge of blood-lines (so much for ‘just a bit of fun’). If there were a suspicion over the stamina of a horse two or three generations back on the dam’s side, he would know it.

Perfect man to go racing with – that splash of pink by Tattenham Corner brought it all achingly back. I so well remember standing with him on that very corner on a Derby Day thirty summers ago, our infant son perched on his shoulders. From that vantage point the horses, last seen in the far distance, disappear down a dip in the undulating course. You hear them before you see them. And then – Wham! – out of nowhere, a brilliant mêlée of hooves and colour as, breath-takingly, unbelievably, heart-stoppingly close to you, the horses crest the rise and turn for home. The most magnificent piece of coup-de-théâtre in all sport. A collective gasp. A second to refocus vision. Another to assimilate. And then a slow, spreading, rising and unbelievably deep and concerted roar as the punters grasp what’s happening – yes, by now unmistakeably, it’s the favourite with Lester Piggott up, poised to hit the front and lead them all the way home along the finishing straight. The roar is picked up and rolls and reverberates to the rafters of the open sky all along those final five furlongs as that champion of all champion jockeys rides out hands and heels for an epic ninth and last Derby victory. Gambling on horses is about high emotion as much as speculation – even those who had bet against the Long Fellow (which surely we hadn’t) were roaring the great man home. “Go on, my cocker”, in my father’s hallowed cockney yell of full-on encouragement and high excitement. 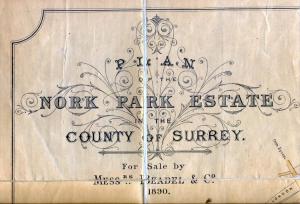 My mother always raised a genteel eyebrow of disapproval, finding the phrase at best ‘common’, and at worst probably ‘rude’ (it’s not, it only means friend or mate). Oh my, oh my, all that weight and spate of memory and I’ve not even opened the map out properly yet. When I did, it turned out to be a Victorian auctioneer’s plan of the Nork Park Estate, a large tract of the Surrey countryside sold off by Charles George Perceval (1845-1897), 7th Earl of Egmont, in 1890. The estate extended from Banstead Station in the north, to Tadworth in the south, bounded to the west by Epsom Downs and to the east by Burgh Heath. The sale was handled by Beadel & Co. – a family firm then in the hands of William James Beadel (1828-1892). The firm must have produced hundreds of similar maps and plans over the course of its longish career, but there would be appear to be only a handful preserved in our major libraries. Certainly no copies of this one recorded. They are among the most interesting and ephemeral of all classes of map.

There being no takers for the estate in its entirety, the decision was made to divide it up into individual lots. Here is how the Surrey Mirror advertised matters on the 12th July 1890:

The NORK PARK ESTATE … A charming residential domain situate in one of the most favourite localities and lovely districts in the home counties, a few minutes’ walk from Epsom Racecourse and Grand Stand, about a mile from Epsom Downs Station, three miles from Epsom Town, and only 16 from London. The train service to London, the South Coast, and all parts is excellent. The estate comprises a total area of about 2,430 acres, abuts on the far-famed Epsom Downs, and includes a noble and substantially-built mansion, well placed on high ground, in a grandly-timbered park, commanding delightful views, surrounded by extensive lawns and pleasure grounds, and containing ample accommodation for a family of distinction. There are walled-in kitchen gardens, with vineries and plant houses, also stables and coach houses. The estate includes several well-arranged and productive farms, with good dwelling houses, suitable homesteads, numerous blocks of building and accommodation land, small holdings, allotments, residences, and cottages. There are valuable common rights over the adjacent Downs. Numerous coverts are interspersed over the property, the shooting being of a very excellent character …”.

The sale was evidently only a very partial success. The following week the Surrey Mirror reported again:

The mansion and its 1,400 acres found a buyer in October in the shape of Frederick Edward Colman of the mustard dynasty (and presumably his ‘family of distinction’), but it is Lot 18, with its splash of pink, which was indeed sold at the auction, that is the focus of interest. The plan has been notarised and signed by a commissioner for oaths, evidently as part of some legal declaration on the part of one Philip Badcock.

Lot 18 lies hard by the spot where Tattenham Corner Station now stands. There were negotiations all through the 1890’s about building it and as to how to connect it to the rest of the railway system. When opened in 1901 it was as the terminus of a somewhat illogical backward-turning diversionary loop. The far more obvious direct link to Epsom Downs Station just to the north was never put in place. Imperfectly erased pencilled lines and notes on the map (almost certainly recoverable with the aid of technology) sketch out alternatives. Philip Badcock (1832-1917) was a London land-agent and surveyor. What I suspect is that either on behalf of a client, or more probably on his own account, Badcock was simply gambling on a speculative windfall. However the railway went, if it were to be built, Lot 18 was going to be the vital key for access.

There is more than one way to place a bet on a racecourse – whether at York last weekend or at Epsom over a hundred years ago.

Laurence Worms has owned and run Ash Rare Books since 1971. He represented the antiquarian book trade on the (British) National Book Committee from 1993 to 2002 and has been six times an elected member of the Council of the Antiquarian Booksellers’ Association. He was largely responsible for drafting the Association’s Code of Good Practice first introduced in 1997 (and its recent update), served as Honorary Secretary of the Association from 1998 to 2001 and as President from 2011 to 2013. He is a former member of the Council of the Bibliographical Society and continues to serve on the Council of the London Topographical Society. He writes and lectures on various aspects of the history of the book and map trades, and has lectured at the universities of Cambridge, London, Reading and Sheffield, as well as at the Bibliographical Society, the Royal Geographical Society, the Warburg Institute, the National Library of Scotland and at Gresham College and Stationers' Hall. Published work includes the compilation of fourteen ‘lives’ for the “Oxford Dictionary of National Biography”, a number of articles for “The Oxford Companion to the Book” and the chapter on early English maps and atlases for the fourth volume of “The Cambridge History of the Book in Britain”. Essays on the British map trade are also appearing in “The History of Cartography” published by the University of Chicago Press. His long-awaited “British Map Engravers”, co-written with Ashley Baynton-Williams, was published to critical acclaim in 2011. He also contributed the numerous biographical notes to Peter Barber’s hugely successful “London : A History in Maps”, co-published by the British Library and the London Topographical Society in 2012.
View all posts by Laurence Worms - Ash Rare Books →
This entry was posted in Antique Maps, Book Fairs, Mapsellers, Worms Family and tagged Beadel & Co., Derby Day, Epsom, Epsom Downs, Lester Piggott, Nork Park Estate, Tattenham Corner, York National Book Fair. Bookmark the permalink.