Always a pleasure to find a book with an old bookbinder’s label in it – even more so in this case when there are three different labels in each of the three volumes of the first edition of Bulwer Lytton’s Devereux (1829).  Bulwer Lytton has cropped up here before – so I won’t dwell on him, although this is the first of his extraordinarily successful  historical novels, a florid tale of political intrigue and melodrama in the days of Queen Anne.  Suffice it to say that a modern Bulwer-Lytton Fiction Contest challenges entrants to compose the opening sentence to the worst of all possible novels.

Bound in an absolutely contemporary half calf, as the labels tell us, by J. Winstanley of 25 Fountain Street, Manchester.  Highly skilled work with some telling detail – just look at the exquisite feathery marbling of the text-edges.  But who was J. Winstanley?

The British Library Database of Bookbindings has pictures of a couple of examples of blind-tooled bindings by J. Winstanley of Manchester, noting three others as yet undigitised, but beyond saying that they are nineteenth-century, the story does not advance there.  One of the books is from Charles Ramsden’s collection, so his Bookbinders of the United Kingdom is the obvious next port of call. Ramsden gives him as John Winstanley, active at various addresses in Manchester from 1813 to perhaps 1850, recording him at 25 Fountain Street in 1828, before moving to 81 Fountain Street by 1832 – so that settles exactly how contemporary the Devereux binding is. 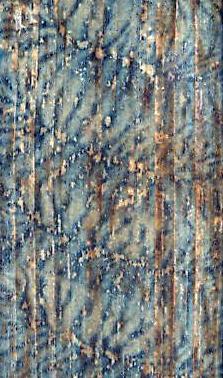 A search of various other sources adds very little else.  Time for someone to delve a little deeper.  Census returns, parish records and some advertisements fill in the story.  John Winstanley (1784-1856) was baptised in Manchester on the 22nd February 1784, the first child of James Winstanley, ‘callenderman’,  and his wife Mary Knowles, who had married the previous year.  He married Elizabeth Hulme on 4th July 1807 – and the couple had at least a dozen children before her death in 1853 and his in the summer of 1856. His final address, from at least 1851 and not recorded elsewhere, was at 35 Cooper Street.

And this is where it all starts to become rather more complicated, because at least two of the sons also became bookbinders – John Winstanley junior (1810-1875) and George Winstanley (1824-1897). (Another son became a cattle-dealer, which lends a pleasing circularity of product to the family business).

The younger John Winstanley led a rather peripatetic career, working in London briefly in the 1830s, in Manchester at Fountain Street with his father in 1841, in Liverpool, in Eccles, Altrincham and Chorlton, while George (some of whose work you can find readily enough on the internet) took over his father’s business, advertising himself as his father’s successor from an address at 7 Dickinson Street, Manchester, in 1862.

Even after John Winstanley junior’s death in 1875 a bookbinding business was continued in that name until at least 1881, when a partnership between J. Winstanley, C. Winstanley and Mary Winstanley trading as ‘John Winstanley’ was formally dissolved – these I take to be two sons and the widow of the younger John.  Charles Winstanley (1851-1934) – grandson of the first John Winstanley, son of the second, was himself a master bookbinder, employing sixteen assistants in Sale in 1882 – and some his work too can readily be found on the internet.

Laurence Worms has owned and run Ash Rare Books since 1971. He represented the antiquarian book trade on the (British) National Book Committee from 1993 to 2002 and has been six times an elected member of the Council of the Antiquarian Booksellers’ Association. He was largely responsible for drafting the Association’s Code of Good Practice first introduced in 1997 (and its recent update), served as Honorary Secretary of the Association from 1998 to 2001 and as President from 2011 to 2013. He is a former member of the Council of the Bibliographical Society and continues to serve on the Council of the London Topographical Society. He writes and lectures on various aspects of the history of the book and map trades, and has lectured at the universities of Cambridge, London, Reading and Sheffield, as well as at the Bibliographical Society, the Royal Geographical Society, the Warburg Institute, the National Library of Scotland and at Gresham College and Stationers' Hall. Published work includes the compilation of fourteen ‘lives’ for the “Oxford Dictionary of National Biography”, a number of articles for “The Oxford Companion to the Book” and the chapter on early English maps and atlases for the fourth volume of “The Cambridge History of the Book in Britain”. Essays on the British map trade are also appearing in “The History of Cartography” published by the University of Chicago Press. His long-awaited “British Map Engravers”, co-written with Ashley Baynton-Williams, was published to critical acclaim in 2011. He also contributed the numerous biographical notes to Peter Barber’s hugely successful “London : A History in Maps”, co-published by the British Library and the London Topographical Society in 2012.
View all posts by Laurence Worms - Ash Rare Books →
This entry was posted in Book Labels, Bookbinders, Forgotten Authors and tagged Bookbinding, Bulwer Lytton, John Winstanley, Manchester. Bookmark the permalink.