I was rather hoping that my somewhat provocative remark a few weeks back about no-one at the York Fair having seen an earlier pictorial British dust-jacket would elicit some challenges.  It didn’t take long.  Peter Allen of Robert Temple Booksellers (http://www.roberttemplerarebooks.co.uk/) was soon in touch – he had at least two earlier examples in his collection of books in early jackets and there were pictures to prove it.

A splendid excuse for an afternoon out in my native North London: a bus onwards from Turnpike Lane (where my grandmother had a shop in the long ago) and there I was knocking on his door.  I could hardly keep up as he produced dozens of examples of nineteenth-century jackets.

Here’s a splendid one on a Macmillan edition of Robert Bloomfield’s “The Horkey” from 1882, the jacket illustrated with a monotone rendition of the beautiful full-colour title-page.  I knew of the existence of the jacket from the admirable listing of known pre-1901 British and American jackets given in Thomas G. Tanselle’s “Book-Jackets : Their History, Forms, and Use” (2011), but the entry doesn’t quite make it clear that the jacket is pictorial.

“Spring Songs and Sketches Selected and Arranged by E. Nesbit and Robert Ellice Mack” (illustrated above), undated but published by Griffith, Farran in 1886, is not noted by Tanselle (although the companion “Summer Songs” from the same series is). Such a delicate book – bound, in Peter’s description, in “textured card wrappers, with die-cut rounded corners, and sewn with silk elaborated into a bow at the spine”, the whole protected by a dust-jacket replicating a design from within the book.

Another which took my eye, although not pictorial, was a dated Oxford University Press “Treasury of Sacred Song” (1889) – printed in two colours and most unusual at this date.  But I think my favourite was “Views of English Society by a Little Girl of Eleven” from the always interesting, always quirky,  Andrew White Tuer (1838-1900) and Abraham Field (1830-1891) of the Leadenhall Press – again undated, but 1886.

The boards covered with a leafy cloth jacket, the flaps  sewn together, giving the whole production a pleasant Cottonian look and feel – and with a delightful explanation of how it came into being from eleven-year-old Mabel (see image – click to enlarge).

Most remarkable and most interesting of all was “The Pleasant Walk in Spring” (1824) in a plain ruled paper jacket (the paper watermarked 1819).

This could of course just be an ad hoc protective covering applied by an early owner and not a publisher’s dust-jacket, but the way the printer’s imprint is carefully lined up to appear in the corner of the flap (continuing in perfect alignment on the lower flap) seems to suggest otherwise.

Peter is fairly sure he once saw an another similar example – one or two more examples and we might have some cogent evidence of dust-jackets in regular use in England even at this early date.

Entertainment over, it was time to look for some books to buy.  Peter has an endlessly interesting stock, mainly nineteenth and twentieth-century literature, but shading off into much wider areas and some genuinely antiquarian material.  His book-room is enviably neat and tidy (something I have never remotely been able to manage and am always so impressed by).

It’s a very interesting business all round.  Another of that distinguished group of booksellers emanating from York University, Peter’s hallmark has long been his lengthy and highly distinctive catalogue descriptions.  Lengthy not in the sense of those maddening and otiose descriptions now so prevalent, listing solely forty-eight different faults which the book doesn’t have and nothing in the slightest bit useful about its format or content – but lengthy in terms of bibliographical description: precise and detailed descriptions of the binding and even, very often, with authors for whom the basic bibliographical work hasn’t been done, a detailed tabulation of possibly significant textual points.

Here’s his note on A. E. W. Mason’s “Fire over England” (1936) – the film of which brought Laurence Olivier and Vivien Leigh together for the first time – and a very handsome copy in the striking Bip Pares jacket (and now of course mine): 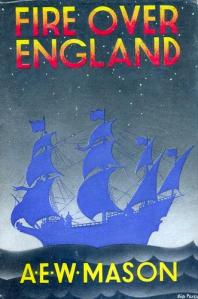 For those who don’t know it, with painstaking work like this, the online Robert Temple Archive is an extraordinary resource.  The business is interesting too in that the firm was one of the very first to come to terms with computers  and (a little later) to launch itself on the internet.  For an idea of how complex and how pioneering a procedure this was, do look up the Robert Temple Booksellers entry on Wikipedia.  Yes – we did have to learn some programming to get a computer to do anything.

And yes, we could get one of those old computers to format and style a complete catalogue at the press of a button – something I can’t do now for all the modern software we have at our disposal.

A thoroughly enjoyable afternoon. Thank you, Peter.  My bag was soon all too full of treasures, but I never could resist a chorus-girl: this little popsy came home with me too – you may well meet her again on my next catalogue.

Laurence Worms has owned and run Ash Rare Books since 1971. He represented the antiquarian book trade on the (British) National Book Committee from 1993 to 2002 and has been six times an elected member of the Council of the Antiquarian Booksellers’ Association. He was largely responsible for drafting the Association’s Code of Good Practice first introduced in 1997 (and its recent update), served as Honorary Secretary of the Association from 1998 to 2001 and as President from 2011 to 2013. He is a former member of the Council of the Bibliographical Society and continues to serve on the Council of the London Topographical Society. He writes and lectures on various aspects of the history of the book and map trades, and has lectured at the universities of Cambridge, London, Reading and Sheffield, as well as at the Bibliographical Society, the Royal Geographical Society, the Warburg Institute, the National Library of Scotland and at Gresham College and Stationers' Hall. He teaches annually at the London Rare Book School, University of London. Published work includes the compilation of fourteen ‘lives’ for the “Oxford Dictionary of National Biography”, a number of articles for “The Oxford Companion to the Book” and the chapter on early English maps and atlases for the fourth volume of “The Cambridge History of the Book in Britain”. Essays on the British map trade are also appearing in “The History of Cartography” published by the University of Chicago Press. His long-awaited “British Map Engravers”, co-written with Ashley Baynton-Williams, was published to critical acclaim in 2011. He also contributed the numerous biographical notes to Peter Barber’s hugely successful “London : A History in Maps”, co-published by the British Library and the London Topographical Society in 2012.
View all posts by Laurence Worms - Ash Rare Books →
This entry was posted in Book Collecting, Booksellers, Dust-Jackets, Forgotten Authors and tagged cataloguing, Peter Allen, Robert Temple Booksellers, Victorian dust-jackets. Bookmark the permalink.