To judge from the record number of visitors to the blog in recent weeks you have all greatly enjoyed the exuberant guest posts from my charming and highly talented colleague, Pauline Schol – as have I.  That’s obviously enough of that.  Needless to say, Ms Schol has now been grounded and confined to the British Library until she has finished her dissertation on George Orwell’s collection of pamphlets.  You may or may not hear from her again.

Normal service has now been resumed and we return to the sale-room of Messrs Sotheby, Wilkinson & Hodge in that year of grace 1888.  Once more following the Roberts enumeration, we come to:

(7) Mr B. Quaritch – this is of course the great Bernard Alexander Christian Quaritch (1819-1899) himself, seated in prime position just below the rostrum.  So much has already been written about Quaritch that it seems nugatory to try to add more.  We have already seen him referred to by ‘The Graphic’ as ‘the Goliath of the trade’.  A whole chapter of Frank Herrmann’s history of Sotheby’s is simply titled ‘The Quaritch Era’ – he was certainly their biggest customer at this time.  You all know his story: born near Göttingen on 23rd April 1819, trained in the book-trade in Germany, arriving in London in 1842, armed only with a letter of introduction to Henry Bohn – and that much quoted and possibly apocryphal conversation:  ‘Mr Bohn, you are the first bookseller in England, I mean to become the first bookseller in Europe’.  By 1847 Quaritch had set up on his own and was soon on an upward trajectory that would make him not just the first bookseller in Europe, but in the world.  On his death in 1899 ‘The Times’ reported, ‘It would scarcely be rash to say that Quaritch was the greatest bookseller who ever lived. His ideals were so high, his eye so keen, his transactions were so colossal, his courage so dauntless, that he stands out among men who have dealt in old literature as a Napoleon or a Wellington stands out among generals’.

I’ll confine myself to repeating a story told by Frank Karslake, who lived near Quaritch in Hampstead, and would often meet him (even at eighty years of age) waiting for the 8.30 omnibus into town: ‘Years ago Mr. Quaritch was asked why he never took a holiday. He replied that it was because his shop was to him a continual holiday.  Pointing to his books, he said, These are my grouse-moors;  my yacht;  my trips to Norway;  my ascents of the Alps;  these are my recreations’.  Quaritch died, still in harness, on 17th December 1899 at his home at 34 Belsize Grove. His estate was valued at £38,782.4s. The legendary business still survives and remains among the foremost names in the trade. 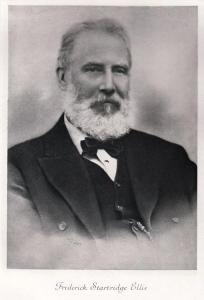 His reputation is such that most of his contemporaries have largely been shunted to the sidelines in accounts of the period, but as we have already seen with Alexander Railton and James Toovey, there were some other very formidable booksellers in late nineteenth-century London.  Although by now retired, one man whom Quaritch probably did regard very nearly as an equal was his great rival (and occasional collaborator at post-auction ‘révisions’), Frederick Startridge Ellis (1830-1901) of New Bond Street.  When Ellis retired through ill-health in 1885, Quaritch wrote to him, ‘You and I are really the first (if not the only) bibliophiles in England … Your name and mine will go down together in the annals of bookselling; and I am presumptuous enough to say, our reputation is like Bayard’s ‘Sans peur et sans reproche’ … Your success has been due to your tact, excellent diplomacy, and above all to your commercial genius; furthermore you were gifted with an eye for beauty …’.

An eye for beauty – Ellis certainly had that.  Friend and publisher of Dante Gabriel Rossetti and  William Morris (he held the co-tenancy of Kelmscott Manor), friend to Swinburne, Burne-Jones and John Ruskin (whose ‘Stray letters from Professor Ruskin to a London Bibliopole’ (1892) were addressed to Ellis).  In later life he became a textual critic and editor, compiling ‘A Lexical Concordance to the Poetical Works of P. B. Shelley’ (1892), as well as editing many of the Kelmscott Press books and proof-reading the Kelmscott Chaucer.

Much of the Ellis stock had been sold at Sotheby’s on his retirement, realising some £16,000 (Quaritch was a major buyer), but the business at 29 New Bond Street, which could trace its origins back to 1728 and was the oldest bookshop in London, was continued by a nephew: 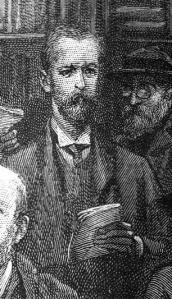 (8)  Mr G. J. Ellis –Gilbert Ifold Ellis (1858-1902), standing just behind Quaritch, bare-headed and ‘intellectual-looking’ in Karslake’s phrase.  Gilbert Ellis was the son of Edward Ellis, a hotelier, and his wife Catherine Jane Ifold.  Educated at the King’s School in Peterborough, he worked for the publishers Chatto & Windus before joining his uncle F. S. Ellis at some point in the 1870s.  He first crossed swords with Quaritch in 1884, when, aged just twenty-five and standing in for his uncle at the Syston Park sale, he put up a fierce fight for the Mentz Psalter, the Fust & Schoeffer Psalmorum Codex of 1459 on vellum, eventually bought by Quaritch for a then world record price of £4,950.  He bought largely again at the sale of his uncle’s stock (including a First Folio for £405) and soon developed a reputation in his own right as a sound judge, working in partnership with Robert Victor Elvey (1858-1934) as ‘Ellis & Elvey’ between 1887 and 1897. Copies of their General Catalogue of Rare Books and MSS : On Sale at 29 New Bond Street (1894) are to be found in a number of libraries, the title-page showing the interior of the shop – cluttered desk, glass-fronted and revolving book-cases, and a Turkish carpet. 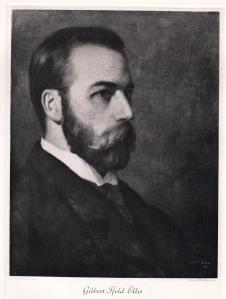 Ellis himself compiled a fine catalogue of the impressive collection of Sir Thomas Brooke in 1891 and also continued his uncle’s publishing activities, publishing Rossetti and working with William Morris, as well as producing ‘The Letter in Spanish of Christopher Columbus … announcing the Discovery of the New World : Reproduced in Facsimile from a Unique Copy in the Possession of the Publishers’  (1889).  Morris was also a good customer, buying a Flemish manuscript psalter from Ellis for £325 in 1895.

Ellis visited the United States in 1899 to find new customers and became a member of the Grolier Club.  He never married and was still living with his parents at their house in Lansdowne Crescent, Notting Hill, when he died prematurely at Dover at the age of forty-three on 6th February 1902, leaving an estate valued at £7,628.11s.9d.  His former assistants James Joseph Holdsworth and George Smith continued the business, while Sotheby’s arranged the eight-day sale of his collection later in 1902, producing a ‘Catalogue of the Choice Stock of Rare Books, Illuminated and other Manuscripts, Autograph Letters, etc. etc. formed by the late Mr. Gilbert I. Ellis’.  A history of the firm by George Smith and Frank Benger was published as ‘The Oldest London Bookshop : A History of Two Hundred Years’ in 1928.  It was an old-fashioned business – even in the 1920s transactions were still recorded in copperplate in monumental ledgers and, according to Percy Muir, even the introduction of blotting-paper was seen as a reluctant concession to ‘the devastating inroads of modernism’.  The firm’s archive, including fourteen day-books and thirty-nine letter books, survives at UCLA.

(9) Mr. J. Roche – peering out from behind Ellis, unnoticed by the editors of ‘The Graphic’ (who confuse Roche with James Westell) but spotted by Roberts and Karslake, is the hatted, bearded and bespectacled figure of James Roche. Karslake gives a brief account: ‘He was a most amiable man, with a habit of interpolating the phrase ‘of course’ into almost every sentence he uttered. This was probably caused by nervousness, for he told me himself that he was one of the most diffident of men. He started in business in 1850, as a dealer in three-volume novels, and this brought him into close contact with such firms as Bentley’s, Hurst & Blackett, Tinsleys, &c., and he literally teemed with stories of the early days of [George Augustus] Sala, Albert Smith, [Edmund Hodgson] Yates, and all sorts of literary hacks, journalists, and other small fry of the world of letters, most of whom are now dead, lost, famous, or forgotten’.

A man with whom one would gladly have swapped a tale or two, but his diffidence evidently extended to communication with officialdom: the archival trail through the usual sources of information, the census returns, etc., is patchy to stay the least. He was evidently born in the London parish of St. Luke, Old Street, in the late 1820s and was said to be seventy or so years of age when he died in 1900. He probably married Mary McCarthy in 1848 and is said by several different sources to have first opened his bookshop in 1850.  In 1851 he was living with his wife and an infant son in Bethnal Green.

For many years he had a shop at No. 1 Southampton Row, a little corner shop at the junction with High Holborn, where he was living with his wife and seven children in 1871. He issued his Catalogue 19, ‘A Catalogue of Miscellaneous, New, and Second-Hand Books, in all Classes of Literature, comprising History, Biography, Travel, and Fiction’, from that address in 1880. He subsequently moved to a shop at 38 New Oxford Street, next door but one to the mighty Mudie’s Library and probably a very shrewdly chosen spot, even if dwarfed by his new neighbour. His business may have been a relatively modest one, although he sold a copy of the ‘Nuremberg Chronicle’ (1493) in contemporary pigskin to the American collector John C. Wilson in 1890.

Laurence Worms has owned and run Ash Rare Books since 1971. He represented the antiquarian book trade on the (British) National Book Committee from 1993 to 2002 and has been six times an elected member of the Council of the Antiquarian Booksellers’ Association. He was largely responsible for drafting the Association’s Code of Good Practice first introduced in 1997 (and its recent update), served as Honorary Secretary of the Association from 1998 to 2001 and as President from 2011 to 2013. He is a former member of the Council of the Bibliographical Society and continues to serve on the Council of the London Topographical Society. He writes and lectures on various aspects of the history of the book and map trades, and has lectured at the universities of Cambridge, London, Reading and Sheffield, as well as at the Bibliographical Society, the Royal Geographical Society, the Warburg Institute, the National Library of Scotland and at Gresham College and Stationers' Hall. Published work includes the compilation of fourteen ‘lives’ for the “Oxford Dictionary of National Biography”, a number of articles for “The Oxford Companion to the Book” and the chapter on early English maps and atlases for the fourth volume of “The Cambridge History of the Book in Britain”. Essays on the British map trade are also appearing in “The History of Cartography” published by the University of Chicago Press. His long-awaited “British Map Engravers”, co-written with Ashley Baynton-Williams, was published to critical acclaim in 2011. He also contributed the numerous biographical notes to Peter Barber’s hugely successful “London : A History in Maps”, co-published by the British Library and the London Topographical Society in 2012.
View all posts by Laurence Worms - Ash Rare Books →
This entry was posted in Booksellers, Bookshops and tagged 1888, Bernard Quaritch, Bookselling, Frederick Startridge Ellis, Gilbert Ifold Ellis, James Roche, Victorian Booksellers. Bookmark the permalink.