Music To Buy Books By

Hello.  It’s me, Pauline Schol, again.  The Guv’nor won’t admit it, but he’s a little bit miffed that the blog got about ten times more visitors than usual after my post last week – “Well, if that’s what they want, then you’d better do it again this week, hadn’t you, clever clogs”.  I think he’s only pretending to be miffed, but I’ll leave him watching the cricket for now: First Day at Lord’s, or something – I thought that was the State Opening of Parliament?  English and peculiar anyway.  Rare jongens, die Engelsen (of waren dat de Romeinen?) 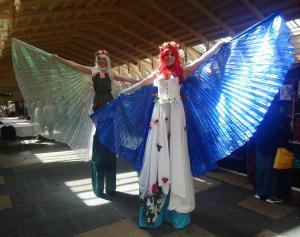 Different customs. Here I am enjoying the sunshine at the Bristol Book Fair last weekend (doing “that weird European sun thing you do”, as he puts it).  I’ve been to some book-fairs before, but this was my first outside London – and the first to which I could bring my freshly-trained and slightly more professional eye.  A bit startled by the women on stilts who greeted us with a flurry of twirls – wasn’t expecting that.  Managed eventually to navigate Laurence past them (he was clearly rather taken) and start looking at some books. There was live jazz music in the background by now – more on that later.

The first thing: I can’t tell you how kind and how friendly everyone was – people coming up to me to congratulate me on the blog-post, offering advice and guidance, asking about my MA course, asking about my future plans – yes, I will be looking for a full-time job in the rare book trade in the autumn, once my MA dissertation is finished (on George Orwell’s amazing personal collection of pamphlets in the British Library).  Do get in touch.

I enjoyed meeting Anthony Smithson (Keel Row Bookshop) and talking to him about the York Antiquarian Book Seminar in September.  I’ll be attending that with Anthony and his colleagues on the faculty.  The Guv’nor thinks it’s time I learnt how the younger generation of booksellers are re-inventing bookselling for the twenty-first century. Really looking forward to it.

I also enjoyed chatting to Tom Lintern-Mole (Antiquates). It’s good to see there are more young people entering the book-selling world.  Although I wonder how he manages to sell his books without being on his stand? Perhaps he has invented some ingenious new way of long-distance bookselling.  Is that what they will teach us at YABS?

As for the books, we were soon finding the odd thing here and there.  A Rupert Brooke, some John Betjeman, a Muriel Spark, an Agatha Christie, etc.  What I can’t yet quite understand are the vagaries of pricing – books that seem to have few or no flaws sometimes seem very underpriced. I thought I had finally started to figure out which authors sell better than others, but then some titles are more popular than other titles – how do booksellers remember all this? 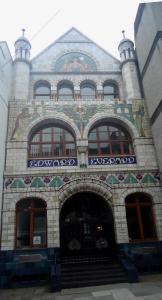 A pleasant evening out on Friday night, stopping first to pay homage to the fabulous art-nouveau façade of the old Edward Everard printing works on Broad Street – chromatic tiles, images of Johann Gutenberg and William Morris, the Spirit of Light, etc.  The Guv’nor would of course have written the entire blog about this and Everard’s (almost certainly tedious) complete family history, ignoring the fair and all the nice people there completely.

Then food, wine (and more wine) – all enlivened by a bizarre conversation with my father (he thought I was in London, I thought he was in Rotterdam, but as it turned out we were both in the Bristol area).  Too late and too far for him to join us for supper, but a cab took me out to the airport in the morning to meet him for breakfast before he flew home. Lovely interlude.

Back at the fair, we really got into our stride on the second day. A signed Tom Stoppard, a nice late Trollope in cloth, Somerset Maugham, Evelyn Waugh, P. G. Wodehouse, the UK edition of this week’s hot topic, ‘To Kill a Mockingbird’, and a whole bunch of folding maps from Arthur Hook – including this wonderful old sampler.  I found a lovely book by Evelyn Sharp that the Guv’nor was thrilled to bits with (see his post called ‘Tracking Miss Banks’ for his account of this extraordinary ‘rebel woman’).  Best of all, I managed to stop him buying any more of those weird and totally unsaleable books he likes to blog about – you know, what did he call them the other week, ‘The Books You Never Knew You Didn’t Want’ – well, apart from the one he bought because it was bound in calf in a rather unsettling shade of deep pink, that is. He claims that isn’t actually why he bought it, but he hasn’t yet offered any more convincing reason.

The most attractive and interesting stand at the fair (we both agreed on this – new eyes and old eyes) was that of Richard V. Wells, with his display of nineteenth-century books illustrated with photographs (we put the catalogue up on the new ABA website just the other day – do have a look).

Wonderful things of real historic interest, visually arresting, very modest prices – at least I thought so.  He had a good fair, thoroughly deserved – and I’m looking forward to cataloguing the one we bought.

The music and entertainment continued on Saturday. Very mixed reviews around the hall for this. Some people plainly liked the music (let’s just call it eclectic, shall we) – a perfect background and a jaunty accompaniment to put everyone in the mood for book-buying.  Others were almost apoplectic – “Can’t hear ourselves speak … It’s driving my customers away”, seethed one with a liberal use of what I suspect may have been very bad language from the north of England.

“This is what happens when you put hippies in charge of book-fairs – you need a right-wing sociopath to run a decent book-fair”, darkly and disturbingly murmured another (who also wishes to remain anonymous).

It takes all sorts – we had a wonderful time.  But perhaps something a little more book-related for next year?  This type of thing perhaps (click to enlarge)?  We departed with just about as many books as we could carry. Some of them you can already see on the brand-new ‘Recent Acquisitions’ page I’ve just added to the Ash Rare Books website.

Great time. Great space. Lovely books.  Lovely people. Thank you to all concerned for all the work put into organising it – especially the fair managers Will Goodsir and Graham York. I’ll be seeing you all again.

Laurence Worms has owned and run Ash Rare Books since 1971. He represented the antiquarian book trade on the (British) National Book Committee from 1993 to 2002 and has been six times an elected member of the Council of the Antiquarian Booksellers’ Association. He was largely responsible for drafting the Association’s Code of Good Practice first introduced in 1997 (and its recent update), served as Honorary Secretary of the Association from 1998 to 2001 and as President from 2011 to 2013. He is a former member of the Council of the Bibliographical Society and continues to serve on the Council of the London Topographical Society. He writes and lectures on various aspects of the history of the book and map trades, and has lectured at the universities of Cambridge, London, Reading and Sheffield, as well as at the Bibliographical Society, the Royal Geographical Society, the Warburg Institute, the National Library of Scotland and at Gresham College and Stationers' Hall. Published work includes the compilation of fourteen ‘lives’ for the “Oxford Dictionary of National Biography”, a number of articles for “The Oxford Companion to the Book” and the chapter on early English maps and atlases for the fourth volume of “The Cambridge History of the Book in Britain”. Essays on the British map trade are also appearing in “The History of Cartography” published by the University of Chicago Press. His long-awaited “British Map Engravers”, co-written with Ashley Baynton-Williams, was published to critical acclaim in 2011. He also contributed the numerous biographical notes to Peter Barber’s hugely successful “London : A History in Maps”, co-published by the British Library and the London Topographical Society in 2012.
View all posts by Laurence Worms - Ash Rare Books →
This entry was posted in Blogging, Book Collecting, Book Fairs, Booksellers and tagged Anthony Smithson, Ash Rare Books, Bristol Book fair, Pauline Schol, Richard V. Wells, Tom Lintern-Mole. Bookmark the permalink.

2 Responses to Music To Buy Books By