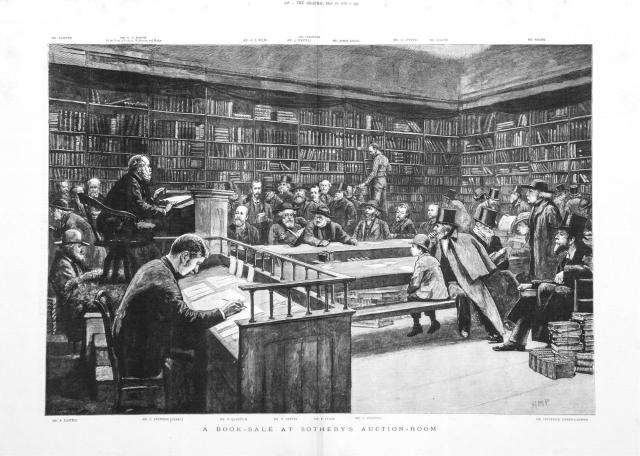 Once more following the Roberts enumeration round the room, we come to:

(4) – Mr J. Rimell. Not noted by the editors of The Graphic but picked up by Roberts, is the bespectacled and bearded figure of James Rimell (1821?-1900), bookseller of Oxford Street – “highly- successful and widely-known” in the words of Frank Karslake, who had “very pleasant personal recollections of him” .  I’ve not traced Rimell’s exact date of birth, but he was born in one of the less fashionable parts of Kensington late in 1821 or early in 1822, the eldest of the children of James Rimell and his wife, Maria Ann Burrell, who had married at St. James Piccadilly in April 1821. His father was originally a grocer, but switched to bookselling in mid life and is credited with founding the family firm in or about 1841.  The younger James Rimell married Emma Parsons in that same year and his father was certainly recorded as a bookseller at that time. 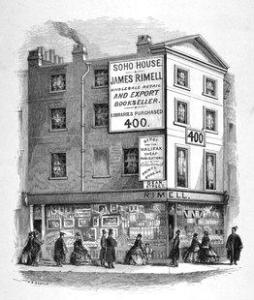 The James Rimell shown here at Sotheby’s was soon heading the firm – his father appears to have died in about 1845 – and had premises at 54 Goodge Street in 1846.  At first in a modest way of business, his bookselling prospered and flourished and at some point in the 1850s he moved to a large and handsome shop at 400 Oxford Street.  By 1861 his son George James Rimell (1842-1924) had joined him, the name of the business eventually becoming James Rimell & Son.  Another son, Henry William, died tragically young at the age of eleven in 1859 while the family were on holiday at Sandown in the Isle of Wight, where Emma Rimell had been born and brought up.

The business increasingly specialised in illustrated books and books on the fine and applied arts.  The title of an 1879 catalogue gives the flavour: Catalogue of illustrated & other second-hand books : on architecture, angling, painting, sculpture, engraving, etching, ornament, costume, scenery, portraits, sporting, travels, early woodcuts, and general literature : also a few new and cheap remainders, at greatly reduced prices : on sale at the prices affixed by James Rimell & Son. 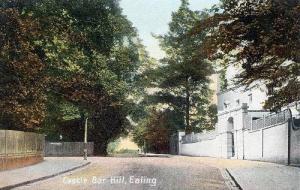 Emma Rimell died at 400 Oxford Street a few days before Christmas in 1879. A niece from the Isle of Wight was pressed into service as a house-keeper, but in 1883 Rimell re-married, his new spouse being Mary Walker, née Kent, herself a widow.  The business moved to  91 Oxford Street, and Rimell himself was now living at Holland Lodge on Castlebar Hill (now 62 Castlebar Road) in Ealing, a fine house he had bought some years earlier but had previously let out.  Rimell retired in favour of his son on 30th June 1895 and died on 13th August 1900. Probate was granted to his widow and son – his estate declared at £17,874.14s.7d.

The firm, by now one of the leading London bookshops, later moved to Shaftesbury Avenue and subsequently to Duke Street, St. James, continuing to specialise in the fine and applied arts. It was  James Rimell & Son who were Major J. R. Abbey’s principal agent in gathering together his extraordinary collection of English colour-plate books in the 1930s. 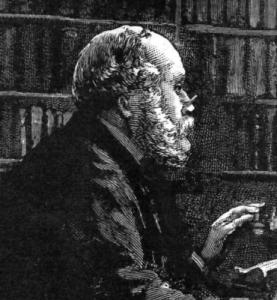 (5) Mr E. G. Hodge – calmly surveying the room and controlling the proceedings is the auctioneer, Edward Grose Hodge (1825-1907). Formerly the junior partner in Sotheby, Wilkinson & Hodge, on the Yorkshireman John Wilkinson’s retirement in about 1885, Hodge – long kept in the shadows by Wilkinson, it is said – emerged as the head of the house and it was he who presided over the extraordinary succession of major sales which occurred at this time.

Born at Phillack, near St. Ives, in Cornwall, Hodge was the son of Thomas Hodge and Eleanor Grose, who had married in 1806. He joined Sotheby’s as a young man in 1847, initially as a clerk, lodging with his elder brother, himself a clerk to a copper smelting business, and working his way up.  He married Elizabeth Giddy Grose Browne at St. Austell on 20th October 1852 –and was to retain strong links with his native Cornwall all his life.  He became a partner in the auction-house in 1864, by this time living in Islington with a growing family.

Karslake thought that the engraving captured him particularly well – “a ‘speaking likeness’ of  him as he was at that date.  As you look at the portrait you can almost hear him saying, ‘Well, gentlemen, what shall we say for this very fine copy?’” – he apparently had a habit of conjuring up little eulogies for the really big books before taking the first bid.  A journalist for The Sketch interviewed him in 1895, finding him both reticent and modest, adding that although Hodge had not mentioned this himself, he was believed to have knocked down the highest-priced book, the highest-priced print, the highest-priced manuscript and the highest-priced coin ever sold.  (The book was the Mentz Psalter, the Fust & Schoeffer Psalmorum Codex of 1459 on vellum bought by Quaritch at the Syston Park sale for £4,950 in 1884). He believed London to be ‘the emporium of the world’ and that it would remain so, simply because there was more money in London than anywhere else.

Speaking of the sale of the Althorp Library to Mrs Rylands (see previous post), he noted interestingly that all the various sums quoted and speculated on were very wide of the mark, although he certainly believed it to have been the largest figure ever paid for a library in this or any other country.  Hodge was increasingly suffering from ill-health by this time and when in 1896 his son Tom became a partner he more or less retired.  He died at his home at 9 Highbury Place, Islington on 16th May 1907 – his estate declared at a staggering £126,198.18s.11d – very much more than any of the booksellers in the room.  Plus ça change.  It was also twice as much the estate of his former partner, John Wilkinson, who had died in 1894. 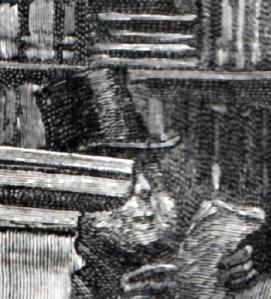 (6) Mr J. Toovey – again not noted in The Graphic and inexplicably almost wholly obscured by the rostrum is the top-hatted figure of the bookseller and publisher James Toovey (1814-1893), one of the few booksellers of the period who might be said to have inhabited the same sphere or in any way to rival Bernard Quaritch.  They were the two great booksellers of Piccadilly.

Toovey was baptised at the London church of St. Clement Dane  on 5th June 1814, the son of Thomas Toovey, a carpenter in nearby Chichester Rents, and his wife Charlotte.  His father found work with the local printers (he is described as a printer’s joiner in a later record) and James Toovey was apprenticed to a bookseller (Richard Beckley) at the age of fourteen in 1828. Once set up on his own, Toovey first came to notice in the 1840s as a publisher of religious texts, catechisms, and lives of saints.  He published John Henry Newman’s The Cistercian Saints of England (1844) and others in this series from his address at 36 St. James Street, as well as the future cardinal’s An Essay on the Development of Christian Doctrine (1845), by this time having moved to 192 Piccadilly.  Although never wholly abandoned, this kind of publishing was soon to give way to antiquarian bookselling.  It was also in 1845 that Toovey married Eliza Mary Ann Palethorpe, a daughter of the late Joseph Palethorpe, a physician. 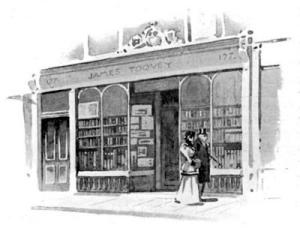 His next and final shop, from 1854 onwards, was at 177 Piccadilly – William Pickering’s old shop (Basil Montagu Pickering worked with Toovey for a time) – and for the next forty years it was to become one of the leading bookshops in London.  He came to be recognised as both scholarly and a great authority on bindings, especially old French red morocco, and acquired many notable books on visits abroad. Dismissed by some as a mere ‘leather-merchant’, Karslake sets the record straight: ‘a man of consummate taste, and repute credits him with having been a genial host’. Henry Huth, a discriminating collector if ever there was one, was a frequent visitor and a good customer.

Toovey bought the famous Gosford Castle library in 1878, cataloguing the Aldines in a special catalogue (Bibliotheca Aldina)  in 1880. He sold the French portion of this Irish library in Paris for some £12,000 in 1882, with a further portion being auctioned in London in 1884 for over £11,000. 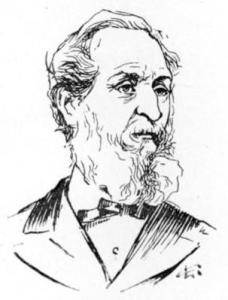 Now a widower, he retired in favour of his son, Charles James Toovey (1848-1925), at some point in the mid 1880s, probably in 1885 when his son’s name starts to appear in the local rate-books, but then took the unusual step of becoming a collector himself – hence, I imagine, his presence in the engraving.  He was by this time living in some splendour at Burnham Abbey near Eton and adorning his books with his bookplates – monogram, gilt, grapevines, and the punning motto, ‘Inter folia fructus’.

He died in September 1893, in his eightieth year, and that point the trade stock was sold off, an event which caused ‘a good deal of fluttering in book-collecting dovecotes’ according to the Pall Mall Gazette. The ten-day sale of over 3,000 lots at Sotheby’s in February and March 1894 realised just over £7,000, but his son, who retired from active trade at this time, had kept back the best of the books – the private collection, which included, it was rumoured, the finest first folio in existence. Toovey’s estate was eventually valued at £28,764.1s.2d. The private collection was eventually sold to J. Pierpoint Morgan in 1899 and the younger Toovey never had to work again. 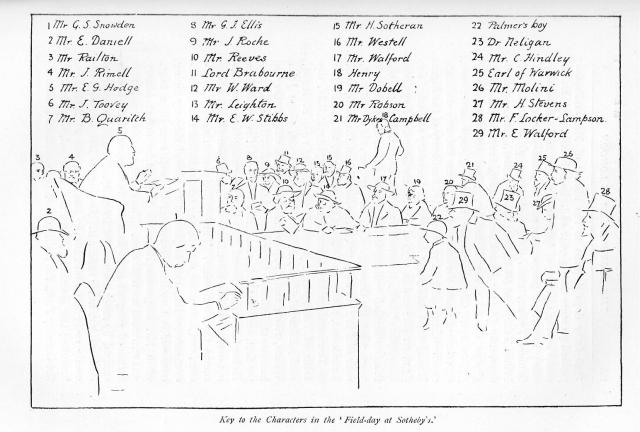 Laurence Worms has owned and run Ash Rare Books since 1971. He represented the antiquarian book trade on the (British) National Book Committee from 1993 to 2002 and has been six times an elected member of the Council of the Antiquarian Booksellers’ Association. He was largely responsible for drafting the Association’s Code of Good Practice first introduced in 1997 (and its recent update), served as Honorary Secretary of the Association from 1998 to 2001 and as President from 2011 to 2013. He is a former member of the Council of the Bibliographical Society and continues to serve on the Council of the London Topographical Society. He writes and lectures on various aspects of the history of the book and map trades, and has lectured at the universities of Cambridge, London, Reading and Sheffield, as well as at the Bibliographical Society, the Royal Geographical Society, the Warburg Institute, the National Library of Scotland and at Gresham College and Stationers' Hall. Published work includes the compilation of fourteen ‘lives’ for the “Oxford Dictionary of National Biography”, a number of articles for “The Oxford Companion to the Book” and the chapter on early English maps and atlases for the fourth volume of “The Cambridge History of the Book in Britain”. Essays on the British map trade are also appearing in “The History of Cartography” published by the University of Chicago Press. His long-awaited “British Map Engravers”, co-written with Ashley Baynton-Williams, was published to critical acclaim in 2011. He also contributed the numerous biographical notes to Peter Barber’s hugely successful “London : A History in Maps”, co-published by the British Library and the London Topographical Society in 2012.
View all posts by Laurence Worms - Ash Rare Books →
This entry was posted in Book Collecting, Booksellers, Bookshops and tagged Booksellers of 1888, Edward Grose Hodge, James Rimell, James Toovey. Bookmark the permalink.