I was actually looking for an image of an old air-raid shelter in Myddlelton Passage in Clerkenwell (my great-grandmother Martha Worms died in there during an air-raid in 1940), when I came across this extraordinary map on the always engaging A London Inheritance blog – Octopium Landlordicuss (Landlord-I-Cuss), published in or about 1909. Whatever your politics, it’s a masterpiece of visual rhetoric and a damning indictment of inherited land, privilege and English leasehold law.

I thought at first that I hadn’t come across it before, but that can’t be true: it features in The Curious Map Book by my colleague and co-author Ashley Baynton-Williams, published by the British Library in 2015, which I read very conscientiously in proof. Memory like a sieve these days.

Beyond Ashley’s lucid and cogent account, there is also a readily accessible analysis of the map on Cornell University Library’s Digital Collections website, so no need for me to reiterate any of that here, except perhaps to repeat Ashley’s use of a contemporary excerpt from a Lloyd George speech:

There is no question more vital … than the question … of the land! … It enters into everything – the food the people eat, the water they drink, the houses they dwell in, the industries upon which their livelihood depends.  And to whom does the land belong in Britain?  To a handful of rich people!  One-third of all the land belongs to members of the House of Lords.  Landlordism is the greatest of all monopolies in this land.  The power of the landlords is boundless.  They may evict their tenants, and devastate the land worse than an enemy would.  Now, I am not attacking the landlords either individually or as a class, but can such a state of affairs be allowed to continue?

The map obviously belongs to the compelling “octopus” category of propaganda map – a nice selection here from Allison Meier at Hyperallergic – although, unusually, this one deals with the enemy within rather than external threat from an enemy without. But lots has already been written about these octopus maps in recent years and indeed they’ve cropped up here on the blog before in a piece about Fred W. Rose back in 1915.

What I thought had been overlooked about the present map was that it was published by Francis Riddell Henderson (1860-1931) of the infamous “Bomb Shop” at 66 Charing Cross Road, but my plans of telling you a little about him soon disappeared when I found that there is already a far better account of him and the shop by Christopher Draper on the English Radical History blog.

All that’s really left for me to say is that the one central figure in all of this who hasn’t really been done justice is the enigmatic man who actually made the map – William Bellinger Northrop (1871-1929). He was actually an American, born in San Francisco on 6th March 1871, so belongs to that special tradition of visitors to London who can perhaps see things with a less comfortable and more revealing eye than those born and bred here. For all his views on aristocrats, he was virtually American aristocracy himself – his mother Emily Constance Northrop (1845-1937), born in Charleston, South Carolina, was a direct descendant of Joseph Northrup who arrived from England in 1637 and was one of the original settlers of Connecticut. Her brother was a bishop, her father, Claudian Bird Northrop (1812-1865), a well-known lawyer in Charleston before his brutal murder in one of the more barbaric passages of the American Civil War, and her uncle Lucius Bellinger Northrop (1811-1894), the Commissary-General of the Confederate forces, appointed by Jefferson Davis himself.

W. B. Northrop was born William Bellinger Ryan, but after his mother formally separated from his lawyer father, Thomas Patrick Ryan (1841?-1909), she was given dispensation by the court for her and her children to revert to her maiden name. After a spell as a young man selling typewriters and cyclostyle duplicating apparatus in Charleston in 1890, Northrop became a journalist, photographer and press-agent. He married Cecile Pinckney (1869-1960), a doctor’s daughter from Atlanta, in 1897 and then made his first visit to London, where their first child, William Ryan Northrop (1898-1905), was born in September 1898.

Northrop was soon appearing regularly in the English magazines – a fascinating article on how the British Museum dealt with its already unwieldy newspaper collection, “with some capital photographs”, in the Temple Magazine for March 1899; a London from Aloft feature in the Leisure Hour in November of that year, with photographs from the top of the Monument, followed by pictures from the  top of St. Paul’s a few months later. An article which attracted a lot of attention was one on the “baking cure” for certain diseases in the Strand Magazine in 1900.

His biggest coup of these years was without doubt a dramatic intervention in the Dreyfus Case which had rocked Europe – his interview with Esterhazy, published in Black & White in 1899, put beyond doubt Dreyfus’s innocence and Northrop’s photographs of the infamous bordereau are now in the National Archives.

After a brief return to the United States in 1900, the Northrops regularly criss-crossed the Atlantic for the next few years, although their other three children were all born in London. From his pen and camera there were articles on Freaks of American Scenery, A Day with Mark Twain, one on Wall Street for The Sketch in October 1902, one on Edison and his phonographs in Leisure Hour in April 1903, another on Auguste Rodin for World’s Work in May 1905, and much else.

His book With Pen and Camera: Interviews with Celebrities came out in 1904. “The book does credit to Mr. Northrop’s enterprise”, declared The Sphere (21st January 1905), “He has interviewed in succession Lord Avebury, Mr. Edison, Mark Twain, Miss Marie Corelli, Sir Hiram Maxim, Mr. John Burns, Mr. John Redmond, Mr. Anthony Hope, Mrs. Humphry Ward … this book may be said to be the apotheosis of the cult of the interview: men of letters, men of science, eminent statesmen, distinguished ambassadors, all falling over one another pell-mell to tell the public their favourite dish for dinner and, indeed, all their special idiosyncrasies. Well, it is all very harmless and pretty if not idyllic, and the abundant illustrations are exceptionally interesting”. 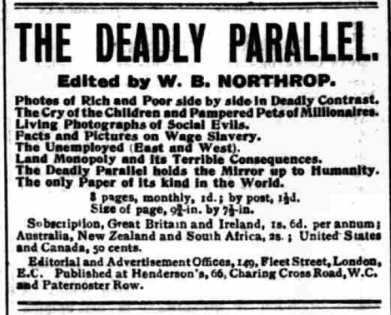 All very worthy, but no sign at all as yet of Northrop the radical polemicist. His sudden and explosive excursion into politics was perhaps triggered by an article on A Court for Child Offenders he wrote for Sunday at Home in March 1907. Later that year he launched his magazine, The Deadly Parallel, published by Henderson. It struck a vein. A public lecture, illustrated with lantern slides, was given at Lambeth later in the year, followed by a cinematograph display at the Latchmere Road Baths in Battersea in November – “We had an immense crowd at the Latchmere Baths last Sunday evening. Quite 2,000 men, women and children came, whole families together, to hear W. B. Northrop and see his telling pictures of contrasted luxury and misery” (Justice, 30th November 1907). 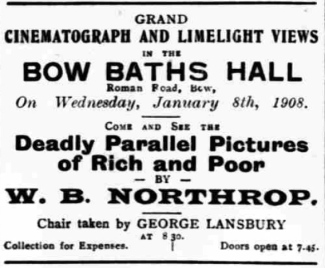 Lantern slides and cinema film were combined together for an even bigger evening at Bow in January 1908 – the celebrated George Lansbury himself in the chair. Bow Baths Hall was packed to the rafters for Northrop’s lecture on “how the rich live by grinding the faces of the poor”. Lansbury topped off the evening with a rousing speech of his own.

Northrop’s book Wealth and Want: A Study in Living Contrasts and Social Problems was published by Frances Griffiths in 1909 – “a veritable gold mine of facts for the social reformer. Mr. Northrop has woven together with much skill hundreds of telling facts and statistics illustrating the conditions under which the mass of the people exist; and to make them still more vivid and convincing, he has put side by side with these horrors the other horrors, those which illustrate the wasteful and useless lives of the rich” (The Clarion, 5th March 1909).

But there, bar a book of poetry – Contrasts: Poems of Poverty – published by Frank Palmer in 1911, Northrop’s rapid rise to the front rank of British radical activists came to an unexplained and sudden end. He returned to New York in 1912, resumed general writing for magazines, and by the time of his death at 253 Henry Street, Brooklyn, on the 8th May 1929, he had become a “special agent of the arson bureau”.

Although we know what Northrop looked like from his various passport applications – five feet, nine inches; high forehead; blue eyes; dark brown hair; straight nose; oval face; medium mouth and complexion; round chin; split thumb-nail on his left hand, etc. – we really can’t account for his sudden excursion into radical politics, or even less for his sudden withdrawal.

Laurence Worms has owned and run Ash Rare Books since 1971. He represented the antiquarian book trade on the (British) National Book Committee from 1993 to 2002 and has been six times an elected member of the Council of the Antiquarian Booksellers’ Association. He was largely responsible for drafting the Association’s Code of Good Practice first introduced in 1997 (and its recent update), served as Honorary Secretary of the Association from 1998 to 2001 and as President from 2011 to 2013. He is a former member of the Council of the Bibliographical Society and continues to serve on the Council of the London Topographical Society. He writes and lectures on various aspects of the history of the book and map trades, and has lectured at the universities of Cambridge, London, Reading and Sheffield, as well as at the Bibliographical Society, the Royal Geographical Society, the Warburg Institute, the National Library of Scotland and at Gresham College and Stationers' Hall. Published work includes the compilation of fourteen ‘lives’ for the “Oxford Dictionary of National Biography”, a number of articles for “The Oxford Companion to the Book” and the chapter on early English maps and atlases for the fourth volume of “The Cambridge History of the Book in Britain”. Essays on the British map trade are also appearing in “The History of Cartography” published by the University of Chicago Press. His long-awaited “British Map Engravers”, co-written with Ashley Baynton-Williams, was published to critical acclaim in 2011. He also contributed the numerous biographical notes to Peter Barber’s hugely successful “London : A History in Maps”, co-published by the British Library and the London Topographical Society in 2012.
View all posts by Laurence Worms - Ash Rare Books →
This entry was posted in Antique Maps, Bookshops, Forgotten Authors and tagged Francis Riddell Henderson, London, Maps, Octopus Maps, William Bellinger Northrop. Bookmark the permalink.