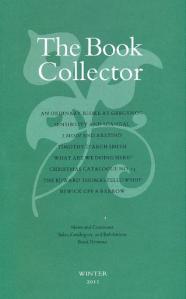 Our purpose was to discuss how the ABA and The Book Collector might help or co-operate with each other to our mutual benefit – we address the same audience after all.  We both fear (indeed know) we are failing to reach a younger generation of dealers and collectors.  Truth to tell, the decline in ABA membership over the past forty years is probably more or less precisely mirrored in the decline in book-trade subscriptions and advertising in what is now, after all, the only remaining specialist journal in our field.  Of course, it is important that The Book Collector retains its “notoriously independent” editorials:  it would be neither edifying nor productive to have a journal which simply fawned.  If we need taking to task, we need taking to task – and TBC’s audience is not confined to the book trade – it goes to serious collectors and all the major buying libraries.  In many ways it is the bridge which unites us and our major customers.  The independence is paramount.

I suspect that many of you have never subscribed (or perhaps no longer do so).  You may never have heard of The Book Collector (it took me long enough in the long ago to discover it existed).  Let me examine its current content for you.  The last quarterly issue (Winter 2011) opens with what might at first glance be taken for  a review of two books on different aspects of the Gregynog Press, but being by Nicolas himself, it is an eight-page essay-cum-editorial illuminating all manner of things – the latest in a long line of such seemingly omniscient editorials.  Absolutely essential if you are in any way serious about books.

News & Comment follows – and what have we here?  Some punchy thoughts on the British Library; the most beautiful book published last year;  the Brotherton Library;  the congress of the Association Internationale de Bibliophilie;  Laurence Olivier’s books catalogued by Quaritch;  Robert Boyle’s lost library;  Graham Rees;  Robin Alston;  an Anthony Powell rarity;  book-fairs;  the specialised, if not extreme, sport of filigranology;  conferences;  Kafka’s letters;  David Batterham (see Among Booksellers below);  book-thefts;  the recession – and much else (even, bizarrely, a mention of this blog).

Then the articles proper:  John Bidwell on that late eighteenth-century revolutionary sensation, Paul and Virginia;   James Grantham Turner on I Modi and Aretino;  the peerless Mirjam Foot on an embroidered binding for Charles I;  the latest of Sheila Markham’s always absorbing interviews with booksellers (Timothy d’Arch-Smith);  the great Ed Maggs with notes from his inbox;  John Saumarez Smith on creating a library;  Julian Browning’s tribute to Michael Silverman;  the legendary, fearsome and panic-inducing Christmas catalogue – a selection of howlers and other infelicities culled mainly from booksellers’ and auctioneers’ catalogues – can barely steel myself to look at it;  James Fergusson on the Edward Thomas Fellowship;  Ann Baer on the chance find of a wonderful Bewick association copy.

Then on to a round-up of the latest auction news and results;  a round-up of the book-trade’s latest catalogues, often with comment (generally kind, occasionally forceful) and often the first thing we look at – first  catalogues especially are always offered a generous welcome;  notes on exhibitions;  obituaries; book reviews – and, well frankly, how much more do we want exactly from a handsomely produced quarterly journal devoted to the way we earn our living – and all for a UK subscription of a pound a week?

And more than this, The Book Collector’s website (link to the right) nowadays includes its entire archive – sixty years’ worth of interest and information, readily accessible.  There are things here (the bibliographies of forgotten authors are a particular favourite) that you will find nowhere else.  I recommend.  You know you want to – just subscribe.

A pleasant lunch.  We readily agree to do what we can to repair what Nicolas calls the “on-off” relationship between the ABA and The Book Collector.  Better communications – agreed.  Reciprocal advertising and links between our websites – agreed.  More frequent exchanges of view – agreed.  Recognition of a mutual symbiotic need – agreed.

Laurence Worms has owned and run Ash Rare Books since 1971. He represented the antiquarian book trade on the (British) National Book Committee from 1993 to 2002 and has been six times an elected member of the Council of the Antiquarian Booksellers’ Association. He was largely responsible for drafting the Association’s Code of Good Practice first introduced in 1997 (and its recent update), served as Honorary Secretary of the Association from 1998 to 2001 and as President from 2011 to 2013. He is a former member of the Council of the Bibliographical Society and continues to serve on the Council of the London Topographical Society. He writes and lectures on various aspects of the history of the book and map trades, and has lectured at the universities of Cambridge, London, Reading and Sheffield, as well as at the Bibliographical Society, the Royal Geographical Society, the Warburg Institute, the National Library of Scotland and at Gresham College and Stationers' Hall. Published work includes the compilation of fourteen ‘lives’ for the “Oxford Dictionary of National Biography”, a number of articles for “The Oxford Companion to the Book” and the chapter on early English maps and atlases for the fourth volume of “The Cambridge History of the Book in Britain”. Essays on the British map trade are also appearing in “The History of Cartography” published by the University of Chicago Press. His long-awaited “British Map Engravers”, co-written with Ashley Baynton-Williams, was published to critical acclaim in 2011. He also contributed the numerous biographical notes to Peter Barber’s hugely successful “London : A History in Maps”, co-published by the British Library and the London Topographical Society in 2012.
View all posts by Laurence Worms - Ash Rare Books →
This entry was posted in ABA, Book Collecting and tagged Book Collector, James Fergusson, Nicolas Barker. Bookmark the permalink.