My attention is caught by the blog of the British Postal Museum & Archive – not that I am nowadays so lost in the swirls of the blogosphere as to be a regular browser there (and in fact I now notice that this particular piece was posted some time ago) – but startling all the same – and the ABA invariably likes to look after its members’ interests.  The post (link as ever in the blogroll to the right) celebrates one of the Archive’s prize “possessions”:  a copy of the first edition of James Joyce’s Ulysses (1922), impounded under a warrant which expired on 13th November 1936 permitting the seizure of copies of the book sent through the post under the then prevailing libel and obscenity laws.

The post goes on to explain that this particular copy was sent by “a David Byrne in Dublin to the London bookseller Jacob Schwarz [sic]”, and which, “despite the ban being lifted, was never forwarded on to Mr Schwarz or sent back to Mr Byrne, but remained with the Post Office until eventually it was transferred across to the archive”.  The post also reveals that a “fair few” other copies were intercepted and names the intended recipients of two of them.  Were they returned to their owners? – and, if not, how many others have “remained with” the Post Office? – what sort  of euphemism is that for hanging on to something valuable which is plainly not yours?

I can’t tell from the photograph quite where in the canon of complexity surrounding the early issues of Ulysses this one belongs, but I can tell you that the narrator of Michael Arlen’s The Green Hat mentions his “watching financial brief” on a copy of this banned book as early as 1924. Valuable then, well known to be valuable then, and super valuable now.  But I can tell you a little about the patently dispossessed – not to say robbed – Dr Jacob (Jake) Schwartz of the Bloomsbury Bookshop in London, who became a member of the ABA in April 1934.  Originally a dentist in Brooklyn, and presumably the author of the contemporary Practical Dental Anatomy and Tooth Carving, he arrived in England and set up as a bookseller in quite a flurry of activity in the early 1930s.

He published at least one catalogue under the title First Editions (1530-1930) for Students, Collectors, Investors and Speculators – which perhaps gives an idea of his style – as well as nicely produced limited editions of a couple of Joyce essays (probably unauthorised, although Schwartz promised Joyce that none would ever be offered for sale), various things by Edmund Blunden and Havelock Ellis, as well as less remembered writers of the period like John Hampson, John Collier, John Gawsworth and the Australian Henry Handel Richardson (Ethel Lindesay).  Somewhat ironically, in the present context, he also published an edition of Edgar Allan Poe’s The Purloined Letter.   He was something of a bibliographer too – a bibliography of A. E. Coppard – and I suppose his best-known publication, 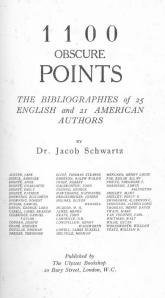 1100 Obscure Points : The Bibliographies of 25 English and 21 American Authors (1931).  I have a well-thumbed copy of this, bequeathed to me by my predecessors, Hugh Jones and Cyril Nash, who spoke well of it and I think had known Dr Schwartz.  The book certainly still has its uses, and I’ve just found an old pound note tucked inside it (actually, I knew it was there, but that’s another story).  It’s rather attractively dedicated to “the bibliographer who insured himself against going mad” and the verso of the half-title is generously blazoned with the legend, “This book is not in copyright.  Any individual or publisher may reprint the book in part or entirety at his own pleasure”.

The late Carlton Lake of the Harry Ransom Humanities Research Center at the University of Texas is the authority (link to the right – Ed the Collector) for saying that Jake Schwartz had a brief entanglement with the theatre in Hollywood during the war, but returned to bookselling assisted by his brother, David, “Jake’s legman, bundle boy, accountant and general United States representative”.  He worked in Paris, London and Brighton – and it was he who put together the extraordinary T. E. Hanley collection of Samuel Beckett which now resides at the Harry Ransom.  The manuscript material came largely from Beckett himself, who wrote of Schwartz as “an entertaining ruffian” and came to refer to the former dentist as “The Great Extractor”.  Beckett also wryly recollected the “sparing use of anaesthetic” attendant on these transactions.

Schwartz certainly lived on until the 1960s, manifestly time enough for his Ulysses to be delivered to him, but there my information runs out.  Does anyone know more?  Anthony Rota certainly knew him, describing him as “colourful” in Books in the Blood (2002) – a word with an Anthonine resonance suggesting a world of meaning.  He goes on to relate a story of Dr S. once really overstepping the mark and disturbing the Rotarian proprieties – “My father turned away and started back towards his office.  Jake dropped to his knees and raised his hands in supplication.  Still on his knees he followed my father across the room at a truly astonishing rate.  By now he appeared to be weeping.  ‘Would my father ever forgive him?’ he asked … Jake, still on his knees, making quite a spectacle of himself in the shop, said that nothing would do but that we should all three agree to be his guests at dinner … to show that we did indeed forgive him”.

Less easy to forgive is the somewhat cavalier attitude of the Post Office towards other people’s property.  The book should plainly have been forwarded on – or perhaps returned to David Byrne, his invoice or receipt is still with the book (and does anyone know anything of him)?  But either way, Jacob Schwartz was one of our members and on his behalf I think I’m entitled to ask for its return.

Faced with a government which has recently imposed on us the inanities of Artist’s Resale Right (Droit de Suite), obliging us to collect and pay royalties over and over again to the estates of artists who have died anything up to seventy years ago – the screwiest and most unworkable legislation to have emanated out of Europe yet, calculated to destroy the European art market, and rendered more onerous in the UK than anywhere else by the wholly voluntary and plain barmy imposition of a ludicrously low threshold of €1,000 – there can plainly be no possible plea that too much time has now passed.  It’s not Jake Schwartz who is the Great Extractor here.  Give it back!

PS – For those who are perhaps beginning to think I should get out more, I shall be up in Edinburgh for the Book Fair this weekend (link to the right) – and a few days in East Anglia are planned for the beginning of April.

Laurence Worms has owned and run Ash Rare Books since 1971. He represented the antiquarian book trade on the (British) National Book Committee from 1993 to 2002 and has been six times an elected member of the Council of the Antiquarian Booksellers’ Association. He was largely responsible for drafting the Association’s Code of Good Practice first introduced in 1997 (and its recent update), served as Honorary Secretary of the Association from 1998 to 2001 and as President from 2011 to 2013. He is a former member of the Council of the Bibliographical Society and continues to serve on the Council of the London Topographical Society. He writes and lectures on various aspects of the history of the book and map trades, and has lectured at the universities of Cambridge, London, Reading and Sheffield, as well as at the Bibliographical Society, the Royal Geographical Society, the Warburg Institute, the National Library of Scotland and at Gresham College and Stationers' Hall. Published work includes the compilation of fourteen ‘lives’ for the “Oxford Dictionary of National Biography”, a number of articles for “The Oxford Companion to the Book” and the chapter on early English maps and atlases for the fourth volume of “The Cambridge History of the Book in Britain”. Essays on the British map trade are also appearing in “The History of Cartography” published by the University of Chicago Press. His long-awaited “British Map Engravers”, co-written with Ashley Baynton-Williams, was published to critical acclaim in 2011. He also contributed the numerous biographical notes to Peter Barber’s hugely successful “London : A History in Maps”, co-published by the British Library and the London Topographical Society in 2012.
View all posts by Laurence Worms - Ash Rare Books →
This entry was posted in ABA, Booksellers, Libraries and tagged British Postal Museum & Archive, Jacob Schwartz, James Joyce, Samuel Beckett, The Great Extractor, Ulysses. Bookmark the permalink.

3 Responses to The Great Extractor