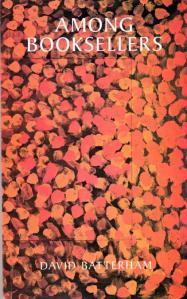 “Booksellers are often rather odd.  This is not surprising since we have all managed to escape or avoid more regular forms of work.

It is also a trade for which there are no rules.  It can be conducted from a shop in Bond Street, from a barrow or from a car-boot.  Some booksellers get most of their books from sales, some by clearing houses;  others, like myself, simply by buying books from other booksellers’ shops”.

So begins David Batterham’s book, Among Booksellers : Tales Told in Letters to Howard Hodgkin (Stone Trough Books, 2011) – because David has essentially been on a safari to bookshops all his working life.  And writing about it too – with style and panache.

Dealing in books which, as he says, “one can enjoy without having to read” – the illustrated and the picturesque – “trade catalogues, fashion magazines and other illustrated journals, typography, political caricatures, architectural pattern books”, etc. – he is not particularly constrained by considerations of locality or language.  The wider world is his canvas.  Here we have a selection from his  apparently one-sided correspondence with the artist Howard Hodgkin – letters written between 1970 and 2006 from places as varied as San Antonio (Texas), Tunisia, frequently Paris (and elsewhere in France), Venice, Barcelona, Copenhagen, New York, Lisbon, Porto, Brussels, Madrid, Istanbul – oh, and Morecambe.

David has the enviable ability to sum up the style and character of a bookseller or a bookshop to a nicety in a few short phrases – “a flamboyant fellow dressed in English milord-style tweeds. He speaks perfect but somehow archaic English, ‘chums’ and so on.  I think he must have been to an English public school in Estoril or even Brasil” – he notes of one ABA member.  And as he was writing privately to a friend, he evidently felt no particular need to hold back – at least two past presidents of the ABA are shown in a less than flattering light (you won’t find either of them in the index provided of “People in the Text”, any more than you will any of the other booksellers mentioned – no cheating, you have to read it all).

For those of you who have been enjoying any or all of these recent posts, this is undoubtedly a book for you – a safari  writ large and writ honestly – the author is as unsparing of himself as he is of others.  And (as a bonus) I don’t believe there is a single reference in it anywhere to the internet.  Margaret Drabble summed it up in a review as “An extraordinary portrait of the strange, eccentric world of dealing and collecting, with its chance encounters, its crazed characters, its obsessions and its loneliness”.  This perhaps tells us more about her than about the book – the good fellowship seemed to me to come through more clearly than the odd lonely night in an eccentric hotel (which David appeared to relish in any case – the more eccentric the better).

The First Lady greatly enjoyed it – “What a lovely life”, she said somewhat wistfully, plainly seeing me as having failed abysmally in making a similar life anywhere near as interesting or exciting – and going on to wonder and rather loudly and rather publicly why she hadn’t been taken on buying trips to any of these exotic places.

Thank you for that, David.  Morecambe it is for the holidays.

Laurence Worms has owned and run Ash Rare Books since 1971. He represented the antiquarian book trade on the (British) National Book Committee from 1993 to 2002 and has been six times an elected member of the Council of the Antiquarian Booksellers’ Association. He was largely responsible for drafting the Association’s Code of Good Practice first introduced in 1997 (and its recent update), served as Honorary Secretary of the Association from 1998 to 2001 and as President from 2011 to 2013. He is a former member of the Council of the Bibliographical Society and continues to serve on the Council of the London Topographical Society. He writes and lectures on various aspects of the history of the book and map trades, and has lectured at the universities of Cambridge, London, Reading and Sheffield, as well as at the Bibliographical Society, the Royal Geographical Society, the Warburg Institute, the National Library of Scotland and at Gresham College and Stationers' Hall. Published work includes the compilation of fourteen ‘lives’ for the “Oxford Dictionary of National Biography”, a number of articles for “The Oxford Companion to the Book” and the chapter on early English maps and atlases for the fourth volume of “The Cambridge History of the Book in Britain”. Essays on the British map trade are also appearing in “The History of Cartography” published by the University of Chicago Press. His long-awaited “British Map Engravers”, co-written with Ashley Baynton-Williams, was published to critical acclaim in 2011. He also contributed the numerous biographical notes to Peter Barber’s hugely successful “London : A History in Maps”, co-published by the British Library and the London Topographical Society in 2012.
View all posts by Laurence Worms - Ash Rare Books →
This entry was posted in Booksellers and tagged Among Booksellers, Bookselling, David Batterham. Bookmark the permalink.

2 Responses to Among Booksellers