A Room with a View

Booked into the Avon Gorge Hotel in Bristol – well, Clifton, really – on Tuesday.  Room with a view over the Gorge turned out to be a standing-on-one-leg and seriously neck-craning affair – but a quiet (if forceful ) word from the First Lady soon saw us upgraded to a suite with a thrilling view of the Isambard Kingdom Brunel suspension bridge (see correction to this statement in the comments from Julia Elton) – his last major work before forging the Olympic rings the other night.

Good to be back in Bristol – one of the great cities, architecturally and in every other way.  Anne was a student there – familiar haunts for her – and, yes, she was that legendary barmaid at the Coronation Tap.  Cream tea on the terrace in blazing sunshine.  Exquisite.

Brief doze, then off to Bishopston to meet up with ABA stalwart Steve Liddle (and Kath).  Rachel Lee (Rachel Lee Rare Books) had come over from Warmley – how kind of her and how nice to see her again.  Handsomely greeted and treated at Steve’s local restaurant, Delmonico’s.  Excellent meal.  Heard more about Steve’s early days as a rock star (catch a glimpse as his drums power the driving rhythm of Fischer-Z’s So Long – video link to the right).  Reminisced with Rachel about the ILAB Congress in Tokyo where we first met all those years ago.  Delightful evening – although the freshly-charged camera battery was somehow not charged at all – no pictures.  Sorry to all.

Back to Steve’s the following morning to hunt down some books (carefully skirting the drum-kits).  Nice little pile of some quirky and out-of-the-way books – and you can all look forward to his offering some books from comedian Ronnie Barker’s library sometime soon – including a wonderfully funny spoof family album.  Too hot by lunchtime to do anything much but retire to a shady spot on the hotel terrace (Anne had found the wonderful Bristol Lido – the country’s oldest).  Later on a quiet cider or two in the Coronation Tap for old times’ sake.

A train to Bath Spa on Thursday morning could only mean a visit to Bayntun’s.  Forty years since my first visit there – an equally hot day I seem to recall.  Jeremy Peters has been there about that long – and so good to see him still pacing this most elegant and handsome of bookshops.  And here’s the boss himself, Ed Bayntun-Coward, hustling up a coffee.  The true story of that delicate pale green paint which always adorns the Bayntun interior.

Pre-war government surplus, taken out of service when its oh-so-soothing colour was found actually to agitate patients in mental hospitals.  Brief chat about book-trade matters.  But far too many books to look at to dawdle.  A very handsome pile soon emerges – can’t wait for the parcels to arrive. 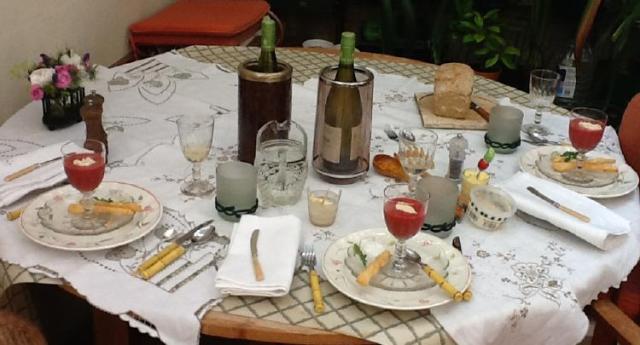 Off to Freshford for lunch with Janet Clarke.  The train follows the Avon through rolling hills and wonderful country.  Another gorgeous day.   A glass of wine or two in the garden.  Janet specialises in cookery books – and it shows, it really does.  A superb lunch – a beetroot cup to start, salmon with Janet’s famous khaki sauce (capers, cornichons and secrets – see the Tamasin Day-Lewis interview in the Blogroll to the right).  A delicious last-of-the-raspberries concoction to follow.   And Janet entertains us the while with tales of fly-fishing (her other passion) – and some trenchant views on book-trade matters.  A glorious afternoon – and the hospitality not yet done.  We are sent on our way with a box of wonderful eggs from prize-winning chickens, as well as Janet’s home-made quince-jelly, redcurrant-jelly, blackcurrant-jelly, marmalade and Lord knows what else.

Thank you, Janet.  Thank you, all.  Splendid couple of days – good books, fine company, warm welcomes.  We’ll be back.  (And, you know, they are all very happy to sell books to other people too – give it a try).

Laurence Worms has owned and run Ash Rare Books since 1971. He represented the antiquarian book trade on the (British) National Book Committee from 1993 to 2002 and has been six times an elected member of the Council of the Antiquarian Booksellers’ Association. He was largely responsible for drafting the Association’s Code of Good Practice first introduced in 1997 (and its recent update), served as Honorary Secretary of the Association from 1998 to 2001 and as President from 2011 to 2013. He is a former member of the Council of the Bibliographical Society and continues to serve on the Council of the London Topographical Society. He writes and lectures on various aspects of the history of the book and map trades, and has lectured at the universities of Cambridge, London, Reading and Sheffield, as well as at the Bibliographical Society, the Royal Geographical Society, the Warburg Institute, the National Library of Scotland and at Gresham College and Stationers' Hall. Published work includes the compilation of fourteen ‘lives’ for the “Oxford Dictionary of National Biography”, a number of articles for “The Oxford Companion to the Book” and the chapter on early English maps and atlases for the fourth volume of “The Cambridge History of the Book in Britain”. Essays on the British map trade are also appearing in “The History of Cartography” published by the University of Chicago Press. His long-awaited “British Map Engravers”, co-written with Ashley Baynton-Williams, was published to critical acclaim in 2011. He also contributed the numerous biographical notes to Peter Barber’s hugely successful “London : A History in Maps”, co-published by the British Library and the London Topographical Society in 2012.
View all posts by Laurence Worms - Ash Rare Books →
This entry was posted in Book Collecting, Booksellers, Bookshops and tagged Avon Gorge, Bath, Bayntun's, Bristol, Janet Clarke, Rachel Lee, Steve Liddle. Bookmark the permalink.