And so to Bod 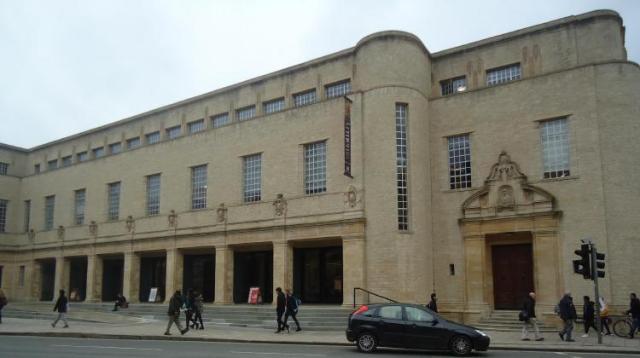 As part of our ongoing series of exchange visits between booksellers and rare book librarians – our friends and colleagues in the Rare Books and Special Collections Group (RBSCG) of the Chartered Institute of Library and Information Professionals (CILIP), a party of ABA members assembled in Oxford in mid November. Old haunts for me – parts of downtown Oxford almost unrecognisable after all these years, but beyond the city centre, up towards St Giles, things virtually unchanged in almost half a century. Still recognisable Oxford ‘types’ on every corner. Far more young women students nowadays, of course, and far more bicycles (nothing less cool than a cyclist back in the ’sixties – although at least they spared us the silly latex and had far better manners).

There were a dozen of us: ABA President Michael ‘Oscar’ Graves-Johnston; Brian Lake and Carol Murphy from Jarndyce; honorary member David Chambers; Sam Jonkers from Henley; Anke Timmerman and Mark James from Quaritch; Richard Wells from Teignmouth; Ann Gate (Waterfield’s); Tom and Sue Biro (Collectable Books), and myself. Slight chaos and confusion as we assembled in the Blackwell Hall at the Weston Library – two disparate tours scheduled to start at the same time. We were the quiet and well-behaved ones – no, really, we were – we couldn’t be much else in a hall named in honour of that great bookselling family, whose splendid shop still stands next door. Benjamin Henry Blackwell was ABA President in 1912, his son Sir Basil Blackwell in 1926.

The Weston Library is the new name of the New Bodleian Library on Broad Street, after its recent major makeover, rebuilding and refurbishment – renamed in honour of a £25 million donation given by the Garfield Weston Foundation toward its transformation (the Blackwell family chipped in £5 million too). The original 1930s book-stack has been moved down to the lowest basement level. The central stack has been rebuilt along with the installation of three floors of secure storage below ground level. The stone façade has been cleaned. New internal spaces have been created. There are now extra reading rooms and a fine public entrance hall. Above all, the Library is now equipped to store material in conditions laid down by the National Archives’ Standard for Record Repositories. This is critical in allowing the Library to continue to hold major archival collections accepted in lieu of tax and to receive vital funding.

Formally opened earlier in the year, we were to be given a guided tour behind the scenes. Rare Books Assistant Curator Lucy Evans led us first up to the Conservation and Collection Care Department. We were about to be impressed. At the first work-station, Sabina Pugh, the Senior Book Conservator, was working on a mediaeval manuscript of biblical exegesis rebound for Henry VIII – a manuscript presumably acquired and bound for the King at the time of the Dissolution of the Monasteries (1536-1541). Rebound in a regal mustard-coloured velvet, but now in need of work to allow safe handling and study. “I like to think Henry once handled and studied this book himself”, says Sabina. 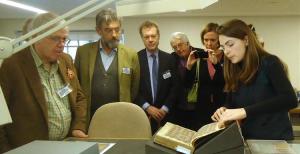 Elsewhere, someone was working on an original Shelley notebook – and not just any notebook, but the one with the original draft of that ode which starts “O Wild West Wind, thou breath of Autumn’s being”. In another corner, work was being carried out on an extravagantly and exquisitely decorated Koran now starting to disintegrate – the vibrant and enticing green of the verdigris pigment the culprit, as so often. Lots of experimentation going on here with relatively new, virtually weightless and virtually transparent-in-use backing papers, and various types of adhesive. A mountain of thought before the intricate and time-consuming work can actually commence.

Fascinating for us booksellers and the source of some animated conversation later in the day. The whole thrust of library conservation is now towards as little intervention as possible – to render the material safe in handling but no more. No thought of restoration, refurbishment or replication of original glory – the Henrician binding to remain lacking some of its velvet, to remain lacking its original metal bosses – the repairs all visible and reversible. It’s a line of thought easy to understand: none of us would wish to intervene too far or to get things wrong. We have all seen disastrous examples of ill-conceived work – on the one hand, the clunky and charmless utilitarian rebinding which makes it fairly sure the book will not fall apart again, but leaves it almost impossible to open and deprives us of all sense of what it originally was, or, at the other extreme, the ruthless shearing off of catchwords and marginalia to present the book in the most finished and fashionable binding of the moment. Booksellers are often in a quandary here. We want to do the right thing, but we also want (and need) to sell the book. Our customers have their own expectations. We don’t exclude restoration or purely cosmetic repair. We don’t – at least most of us – exclude a complete rebinding in ‘period’ style or in a fine binding worthy of the text. Commercial binders can be exceedingly good at this – and there is, I believe, a duty on us all to ensure that the traditional skills of the bookbinder are kept alive. Perhaps time for a conference for all parties to exchange ideas and to attempt to achieve some kind of consensus about best (or at least allowable) practice?

Our tour continued with a special display of ‘treasures’ – chosen by the curators on hand to talk to us about them – some of their personal favourites, some prize recent acquisitions, etc. I was soon lost in contemplation of a wonderful recent bequest to the Bodleian – the exquisite ‘travelling library’ given to the young Prince Charles, later to become Charles I, in the early seventeenth-century. Sixty or so pocket books, worthy titles, the best of learning suitable for a prince’s education, uniformly bound and evidently intended to be a portable companion. So many questions unanswered: is the set complete, who assembled it and when, who bound the books – are these English bindings? French? – and, not least, where have the books been for most of the last four centuries, until they were put into their present red leather cases, made in the 1970s by Sangorski & Sutcliffe? What a research project in prospect. 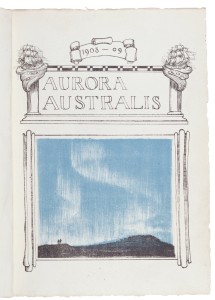 Dragging myself away from these adorable little books, I was soon equally lost in wonderment at the Bodleian copy of Shackleton’s extraordinary “Aurora Australis”, famous as the first book printed in the Antarctic, designed as a project to while away the long polar winter – but also, what I had never realised – a superb piece of printing in its own right.

Our afternoon ended with a complete tour of the building – up on the roof to catch the dreaming spires in an unexpected burst of late afternoon sunshine, a glimpse into the reading rooms and study areas, some encounters with the restored glories of the original 1930s fittings, furniture and ceilings designed by Sir Giles Gilbert Scott (he of the Telephone Box and Battersea Power Station). A pleasant end to a very pleasant afternoon – thank you so much to Lucy Evans and her colleagues for organising things and taking so much effort to entertain us. Our turn next.

Laurence Worms has owned and run Ash Rare Books since 1971. He represented the antiquarian book trade on the (British) National Book Committee from 1993 to 2002 and has been six times an elected member of the Council of the Antiquarian Booksellers’ Association. He was largely responsible for drafting the Association’s Code of Good Practice first introduced in 1997 (and its recent update), served as Honorary Secretary of the Association from 1998 to 2001 and as President from 2011 to 2013. He is a former member of the Council of the Bibliographical Society and continues to serve on the Council of the London Topographical Society. He writes and lectures on various aspects of the history of the book and map trades, and has lectured at the universities of Cambridge, London, Reading and Sheffield, as well as at the Bibliographical Society, the Royal Geographical Society, the Warburg Institute, the National Library of Scotland and at Gresham College and Stationers' Hall. He teaches annually at the London Rare Book School, University of London. Published work includes the compilation of fourteen ‘lives’ for the “Oxford Dictionary of National Biography”, a number of articles for “The Oxford Companion to the Book” and the chapter on early English maps and atlases for the fourth volume of “The Cambridge History of the Book in Britain”. Essays on the British map trade are also appearing in “The History of Cartography” published by the University of Chicago Press. His long-awaited “British Map Engravers”, co-written with Ashley Baynton-Williams, was published to critical acclaim in 2011. He also contributed the numerous biographical notes to Peter Barber’s hugely successful “London : A History in Maps”, co-published by the British Library and the London Topographical Society in 2012.
View all posts by Laurence Worms - Ash Rare Books →
This entry was posted in ABA, ABA Past Presidents, Bookbinders, Booksellers, Libraries and tagged ABA, Bodleian Library, CILIP, Oxford, Weston Library. Bookmark the permalink.