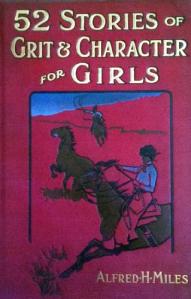 Hi – it’s me again, Pauline Schol, with another guest post. I’ve now obtained my MA in the History of the Book and I’m still benefitting from the Guv’nor’s occasional (if erratic) tutelage. He thought I might like to go to an auction the other week – my very first. Deep in the dark hinterland of South London we turned up at a local auction-house (I’ve been sworn to secrecy on the exact whereabouts) – a place where books are seldom sold, although they are apparently planning more regular book-sales: they have hired John Collins (ex-Maggs, ex-Bonham’s) to run this side of things, so they must be serious.

On display (or not actually on display – they were hidden away in a little room and we were the first of the day to ask where the books were) was rather a handsome collection of the more manly outpourings of Victorian fiction – lots of R. M. Ballantyne and George Manville Fenn – you know the sort of thing. We scoured the shelves and made our notes.

I’d learnt all about the theory and strategy of book-auctions at the York Antiquarian Book Seminar (YABS) back in September, the importance of preparation, the importance of where to stand or sit, how and when to enter the bidding, controlling the pace of bidding, and, above all, setting an absolute limit on the price you are prepared to pay for each lot and not under any circumstances going beyond it.

All that of course went completely out of the window once we arrived on auction-day. The Guv’nor just planted himself slap in the middle of the room, caught the auctioneer’s eye on the very first lot, proceeded to buy it for rather more than the ‘absolute limit’  he’d written in bright green on our catalogue, and just kept bidding in a macho kind of way until he’d bought every lot we wanted. Unbelievable! Is everyone in the book trade this delusional?

In a weird way this aggressive strategy actually seemed to work – it all balanced out over the auction as a whole and we were buying subsequent lots at well below our green figures – but the scariest thing was when he handed the catalogue over to me and wandered off upstairs leaving me to bid on the later lots. Gulp! Thrown in the deep end! Heart in mouth! Adrenalin pumping! Luckily I got a great lot of Laurence Oliphants for well under our agreed upon green price and I felt more confident bidding on the next lot. It’s actually quite fun! 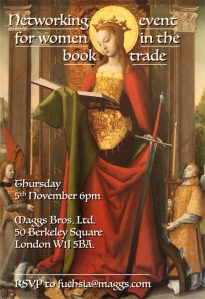 Meanwhile, he had left a healthy bid upstairs on a lot coming up much later in the day – a lot comprising a defective jigsaw-puzzle, a rusty bunsen-burner, another a rusty implement of some description, a broken pocket-watch, a small pair of binoculars, a small brush, some bone glove-stretchers, and the most hideous spelter mantlepiece ornament I’ve ever seen – he’s been trying to palm it off on me ever since, but I’m really not having it. There was something rather special about the jig-saw (an eighteenth-century map) that probably only he and a handful of other people in the world would have known – and he already had a buyer for it. 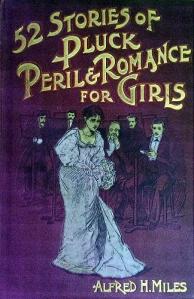 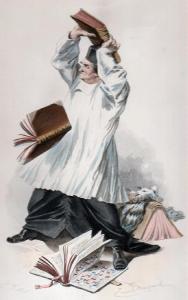 I’m not quite sure what he is trying to tell me, perhaps it’s a coded message on the difficulties women face in entering the book trade. This was very much the theme of the first ‘Networking Event for Women in the Book Trade’ held at Maggs a few days later. The Guv’nor was a bit disappointed at the thought of a gathering of lovely bookish women that he wasn’t going to be allowed to attend, but I thought his telling me to enjoy myself at the ‘coven’ was going way too far (I think he was only joking – he’d better have been). 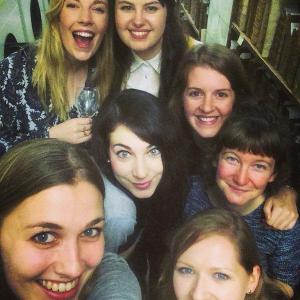 Anyway, I tweeted him a nice photo of two of his very favourite bookish women to keep him happy (no names, we all know who they are). Personally, I think it was a great initiative, splendidly organised by Fuchsia Voremberg. We talked, we networked, we drank, we drank some more, we snacked, we enjoyed ourselves thoroughly and I’m very much looking forward to the next one. 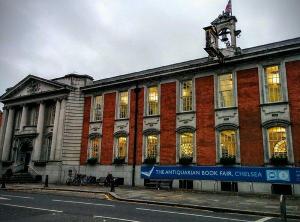 The following day I went to my very first Chelsea Book Fair. Laurence had somehow managed to get himself involved in giving guided tours of the fair to some groups of rare book librarians, so we spent most of the first afternoon escorting them around and introducing them to various booksellers. It was a bit hit or miss as he hadn’t taken the basic precaution of finding out which libraries they were from or what their particular interests were, but with some on-the-spot reinvention of the itinerary it all seemed to go off reasonably well. One of the librarians was still chatting away merrily to Janette Ray long after the tour was over. 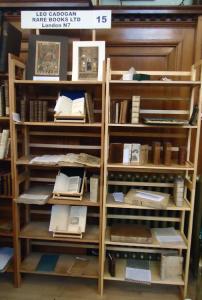 Highlights for the librarians seemed to be the visits to Leo Cadogan, Tom Lintern-Mole (Antiquates), Jenny Allsworth and Quaritch, all of whom had some particularly off-beat, quirky and interesting material. All four stands seemed to be particularly busy throughout the day. We asked Leo at one point if the fair was going well. “Exceptionally well”, was the answer, but he looked strangely dispirited at the thought. “I don’t really like selling my books”, he quietly confided, “I don’t have that many” – priceless! a true bookseller! We courteously refrained from buying any books from him, so as not to distress him any further.

We’d only bought a couple of things on that first afternoon – too busy with librarians – but we returned in earnest, cheque-book at the ready, the following morning. Laurence had already managed to buy two copies of the same book by the time I arrived (only three minutes later) – I quickly confiscated the cheque-book before he could do any more damage. This didn’t seem to slow him down a great deal, but I did just manage to stop him buying a book he already has a better copy of.

It had been a great week with the thrill of my first auction, my first Women in the Book Trade event, and my first Chelsea – although I’m still puzzled about why it seems mandatory for everyone there to wear a blue shirt. I loved getting acquainted with new people and catching up with those I already knew. A whole raft of new acquisitions has now been catalogued and will be featured in the Ash Rare Books catalogue coming out next week. I have learnt so much from everyone and I’m still looking to learn more. This is so much fun. I look forward to seeing you all at the next bookish event.

Laurence Worms has owned and run Ash Rare Books since 1971. He represented the antiquarian book trade on the (British) National Book Committee from 1993 to 2002 and has been six times an elected member of the Council of the Antiquarian Booksellers’ Association. He was largely responsible for drafting the Association’s Code of Good Practice first introduced in 1997 (and its recent update), served as Honorary Secretary of the Association from 1998 to 2001 and as President from 2011 to 2013. He is a former member of the Council of the Bibliographical Society and continues to serve on the Council of the London Topographical Society. He writes and lectures on various aspects of the history of the book and map trades, and has lectured at the universities of Cambridge, London, Reading and Sheffield, as well as at the Bibliographical Society, the Royal Geographical Society, the Warburg Institute, the National Library of Scotland and at Gresham College and Stationers' Hall. Published work includes the compilation of fourteen ‘lives’ for the “Oxford Dictionary of National Biography”, a number of articles for “The Oxford Companion to the Book” and the chapter on early English maps and atlases for the fourth volume of “The Cambridge History of the Book in Britain”. Essays on the British map trade are also appearing in “The History of Cartography” published by the University of Chicago Press. His long-awaited “British Map Engravers”, co-written with Ashley Baynton-Williams, was published to critical acclaim in 2011. He also contributed the numerous biographical notes to Peter Barber’s hugely successful “London : A History in Maps”, co-published by the British Library and the London Topographical Society in 2012.
View all posts by Laurence Worms - Ash Rare Books →
This entry was posted in Book Fairs, Booksellers, Forgotten Authors and tagged Book Auctions, Chelsea Book Fair, Pauline Schol, Women in the Book Trade. Bookmark the permalink.