The End of the World

World’s End – well – not quite the end of the world, but at least as far as James II was prepared to ride out on his constitutionals down the King’s Road. 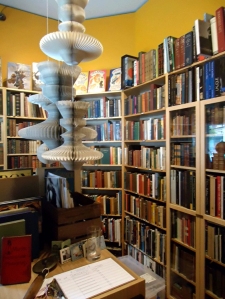 A district of London at the western end of Chelsea which gives its name to the World’s End Bookshop – a shop I’ve known under various owners over the years. The last incumbent, Steve Dickson, actually used to work for me in the long ago when the world was young, but for the last few years it has belonged to Giles Lyon, an active and energetic bookseller always out and about buying books.

I was deeply flattered when he called me a while back to ask if he could send his new assistant over to me one morning a week to be given some tuition in cataloguing. I was happy to oblige and Kaitlyn Mellini from Portland, Oregon, proved an apt, affable and willing pupil – a quick study as we used to say.  Having discovered for herself my weakness for certain types of recondite and largely unsaleable fiction, she offered me a book the other day – and I have to say that she had researched it and catalogued it so nicely that I couldn’t say no.  Not only that, but she made me want to read it too – which is the ultimate accolade in cataloguing.  I went over to the shop to pick it up and to see how she was getting on.  Giles was out (probably buying yet more books) and Kaitlyn was presiding over the shop – all neat and tidy, customers popping in and out, the books carefully arranged, pride of place given to a handsome newly acquired book-case for the more expensive material. 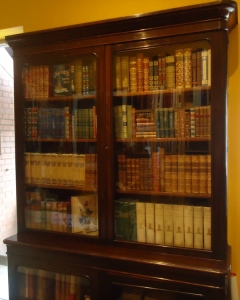 It’s the sort of shop that every neighbourhood should have and probably once did – catering for book-buyers of all kinds.  Genuinely serving the local community.  Quite a large stock crammed into a smallish space, but everything accessible.  Books at all prices.  Books of all kinds from the genuinely antiquarian to the cheap and cheerful second-hand.  A customer wanted a copy of “Brave New World” and was given a choice of anything from a paperback to a first edition. Whatever the question was, there was something to fit the bill, and Kaitlyn knew where to find it. I paid for my book and bought a couple of others as well – one to read, one to sell. A thoroughly pleasant and somewhat nostalgic afternoon, because I can remember a time when such shops as this were reasonably plentiful. They are no longer – use them or lose them.

Laurence Worms has owned and run Ash Rare Books since 1971. He represented the antiquarian book trade on the (British) National Book Committee from 1993 to 2002 and has been six times an elected member of the Council of the Antiquarian Booksellers’ Association. He was largely responsible for drafting the Association’s Code of Good Practice first introduced in 1997 (and its recent update), served as Honorary Secretary of the Association from 1998 to 2001 and as President from 2011 to 2013. He is a former member of the Council of the Bibliographical Society and continues to serve on the Council of the London Topographical Society. He writes and lectures on various aspects of the history of the book and map trades, and has lectured at the universities of Cambridge, London, Reading and Sheffield, as well as at the Bibliographical Society, the Royal Geographical Society, the Warburg Institute, the National Library of Scotland and at Gresham College and Stationers' Hall. Published work includes the compilation of fourteen ‘lives’ for the “Oxford Dictionary of National Biography”, a number of articles for “The Oxford Companion to the Book” and the chapter on early English maps and atlases for the fourth volume of “The Cambridge History of the Book in Britain”. Essays on the British map trade are also appearing in “The History of Cartography” published by the University of Chicago Press. His long-awaited “British Map Engravers”, co-written with Ashley Baynton-Williams, was published to critical acclaim in 2011. He also contributed the numerous biographical notes to Peter Barber’s hugely successful “London : A History in Maps”, co-published by the British Library and the London Topographical Society in 2012.
View all posts by Laurence Worms - Ash Rare Books →
This entry was posted in ABA, Book Collecting, Booksellers, Bookshops and tagged Chelsea, Giles Lyon, Kaitlyn Mellini, World's End Bookshop. Bookmark the permalink.