Strabo’s “Geographica” in a Sixteenth-Century Dust-Jacket 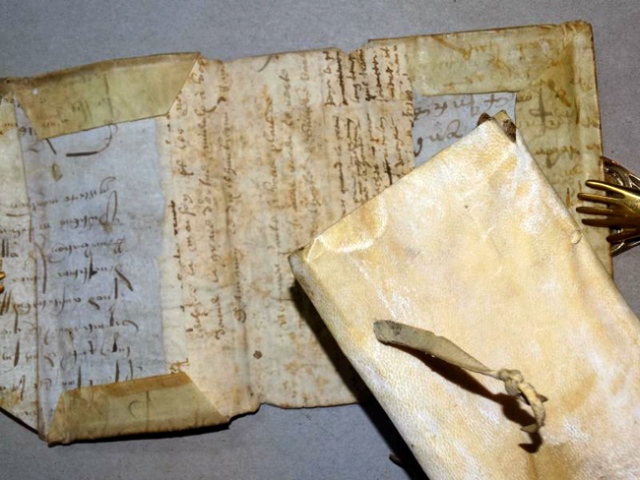 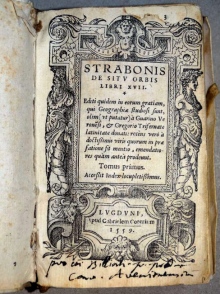 A copy of Strabonis de Situ Orbis Libri XVII (Lyon: Gabriel Coterius, 1559) has come to light in a contemporary dust-jacket.  The book is bound in limp vellum with quasi-yapp edges and remnants of fore-edge ties.  The jacket is made from a scrap of vellum with handwriting on it, and is reinforced on the underside with other manuscript scrap.  The jacket has French flaps and four small slits in the corners which correspond to the position of the fore-edge ties, presumably so the ties could be threaded through. The jacket and binding appear contemporary to each other and to the sheets. 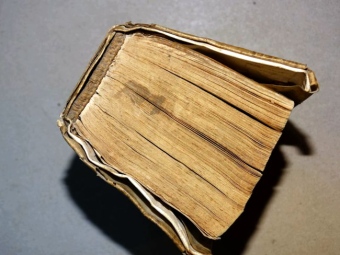 Years ago, I saw another vellum book with a vellum jacket from the 1700s, and there are surviving homemade and lending-library jackets from the 1700s.  There also are German bindery jackets from the late 1700s and early 1800s made with printed scrap under outer paper, similar to the construction of the 1559 jacket.  But I have never seen a verified jacket of any origin within 200 years of this one.  Has anyone?

Whether the 1559 jacket was homemade or produced by the binder, it does show that dust-jackets were known by the 1500s. 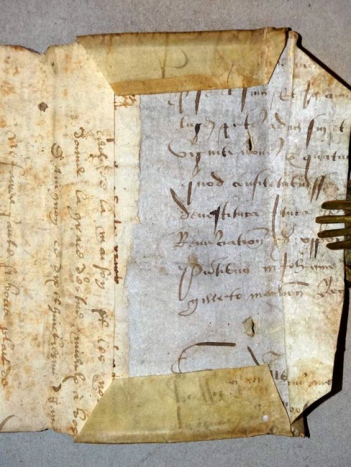 Laurence Worms has owned and run Ash Rare Books since 1971. He represented the antiquarian book trade on the (British) National Book Committee from 1993 to 2002 and has been six times an elected member of the Council of the Antiquarian Booksellers’ Association. He was largely responsible for drafting the Association’s Code of Good Practice first introduced in 1997 (and its recent update), served as Honorary Secretary of the Association from 1998 to 2001 and as President from 2011 to 2013. He is a former member of the Council of the Bibliographical Society and continues to serve on the Council of the London Topographical Society. He writes and lectures on various aspects of the history of the book and map trades, and has lectured at the universities of Cambridge, London, Reading and Sheffield, as well as at the Bibliographical Society, the Royal Geographical Society, the Warburg Institute, the National Library of Scotland and at Gresham College and Stationers' Hall. Published work includes the compilation of fourteen ‘lives’ for the “Oxford Dictionary of National Biography”, a number of articles for “The Oxford Companion to the Book” and the chapter on early English maps and atlases for the fourth volume of “The Cambridge History of the Book in Britain”. Essays on the British map trade are also appearing in “The History of Cartography” published by the University of Chicago Press. His long-awaited “British Map Engravers”, co-written with Ashley Baynton-Williams, was published to critical acclaim in 2011. He also contributed the numerous biographical notes to Peter Barber’s hugely successful “London : A History in Maps”, co-published by the British Library and the London Topographical Society in 2012.
View all posts by Laurence Worms - Ash Rare Books →
This entry was posted in Book Collecting, Bookbinders, Dust-Jackets and tagged Early dust-jackets, Mark Godburn. Bookmark the permalink.