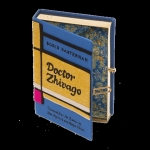 I suppose it should have been the combination of the words Olympia and Books that led me to it – only one meaning for us of course – the biggest-ever Olympia Book Fair coming up next month (link to the right).  But in fact it was the First Lady pointing out to me (in my still newish and slightly reluctant rôle of ABA fashion commentator – see Invasion of the Uggs and The Whole Art of Dress below) an article in the Evening Standard – yes, we still have an evening newspaper in London – how quaint and how civilised is that?

Portrait of a Lady. Embroidered canvas book-clutch by Olympia Le-Tan.

The online version of the story, The £1,000 Book Bag by Karen Dacre (link to the right), rather misses the point by not illustrating the bags.  I of course immediately assumed that these were rather special conservation-standard bags for carrying around our most rare and expensive books – but no, so wrong – these are the latest fashion accessory for the bag-ladies of the celebrity world.  A range of designs (titles) of clutch-bags and minaudieres (if these are in fact different things) by hot-designer-of-the-moment, Olympia Le-Tan.  You see where the confusion arises.

As to the merit or otherwise of the bags themselves I hesitate to comment.  Out of my depth.  But I do know a thing or two about dust-jackets and on looking at Ms Le-Tan’s website (link in the blogroll to the right) – I was struck by the number of, what shall we say, rather undistinguished jacket designs.  Great books don’t always have great dust-jackets of course, but some of these ‘titles’ aren’t all that great on either front.  As far as I know, the ABA wasn’t consulted on the matter – but as many of the bags are now sold out, I thought we might be able to help out with some suggestions for a fresh range – who better to ask than the world’s best and most experienced booksellers?  It’s the very least we can do for someone so enamoured of books that she has named herself after our number one book fair.

So – a competition of sorts – results to be posted on the ABA website.  The hunt is on for the best dust-jacket designs ever.  Nominations are invited from you all – and there may be extra points for books that have an extra resonance for the fashion conscious.  Do let us have your thoughts and suggestions.  Anyone else for Huxley’s great satire, Brave New World?

Laurence Worms has owned and run Ash Rare Books since 1971. He represented the antiquarian book trade on the (British) National Book Committee from 1993 to 2002 and has been six times an elected member of the Council of the Antiquarian Booksellers’ Association. He was largely responsible for drafting the Association’s Code of Good Practice first introduced in 1997 (and its recent update), served as Honorary Secretary of the Association from 1998 to 2001 and as President from 2011 to 2013. He is a former member of the Council of the Bibliographical Society and continues to serve on the Council of the London Topographical Society. He writes and lectures on various aspects of the history of the book and map trades, and has lectured at the universities of Cambridge, London, Reading and Sheffield, as well as at the Bibliographical Society, the Royal Geographical Society, the Warburg Institute, the National Library of Scotland and at Gresham College and Stationers' Hall. Published work includes the compilation of fourteen ‘lives’ for the “Oxford Dictionary of National Biography”, a number of articles for “The Oxford Companion to the Book” and the chapter on early English maps and atlases for the fourth volume of “The Cambridge History of the Book in Britain”. Essays on the British map trade are also appearing in “The History of Cartography” published by the University of Chicago Press. His long-awaited “British Map Engravers”, co-written with Ashley Baynton-Williams, was published to critical acclaim in 2011. He also contributed the numerous biographical notes to Peter Barber’s hugely successful “London : A History in Maps”, co-published by the British Library and the London Topographical Society in 2012.
View all posts by Laurence Worms - Ash Rare Books →
This entry was posted in Fashion. Bookmark the permalink.