A leisurely train northwards and we arrive at a quiet and comfortable hostelry in the rugged and manly Yorkshire Dales.

Strange things to be seen in the north – and stranger weather – all four seasons in an afternoon.  Toss-up in the cafe between a cream tea and a pork pie with mushy peas.  But no denying the friendliness and hospitality.  We share our inn with middle-aged cyclists – lycra by day, bow-ties by night – walkers, ramblers and other active folk.

A manly Yorkshire breakfast and a drive over to Ilkley, there to see Dr. Paul Williams (Fine Books at Ilkley).  And the books are indeed fine – a premium on condition, everything immaculate.  For all his many years in the trade, Paul can still remember a previous life as a university lecturer (organic chemistry, I believe). 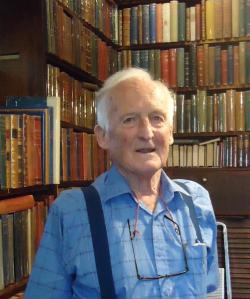 A gradual disillusionment with the education system (or at least the non-teaching aspects) and a move from collecting, to dealing a little, to dealing a lot.  Very strong on travel and mountaineering, his strongest areas, but much else to look at too.  Some modern literature I wasn’t expecting, some uncommon crime and a nice array of children’s books.  And burning bright, his passion still – the energetic and endless quest for the right books.  To judge from the stock, Paul is evidently still working rather harder than most of us.

A cup of coffee – a manly discussion on braces rather than belts for the older man.  A photograph or two.  Some books bought and paid for (particularly like the extra-illustrated Pickwick).

Drizzling at Ilkley but the weather clears as we motor northwards to Bolton Abbey and Grove Rare Books.  No denying that Anne and I have reached the prettiest bookshop and the most delightful setting we have yet encountered.

Stroll through the garden to another more than genial welcome from the business partners, Andrew Sharpe and Adam Yates.  A proper northern shop – strong on the rich local history and topography – hunting, shooting, fishing and other rugged and manly things – with a burgeoning interest in military history from Adam too.

I pick up a few books  and then we adjourn with Andrew to an adjacent cafe – excellent beef sandwiches for me.  Another bookseller with a former life, from chartered surveying, to new books, to proper books.  Very happy indeed to have found in Adam someone young enough and keen enough to take the business forward in the twenty-first century.  But for all the friendliness of the welcome, Andrew is prepared with some tough questions.  Quite right, too.  We are not a trade that can afford complacency.

We range over some of the historic divisions within the trade, some residual and continuing bitterness no longer appropriate, the increasingly metrocentric nature of the ABA, the dearth of members in the north, the possibilities of a northern fair.  Much to chew on here.

We part on the best of terms – and following his excellent directions we take the scenic route homewards, soaring over the fells, past waterfalls, narrow bridges, endless drystone walls, swollen and lush streams, and some of the most delightful countryside England has to offer.  A satisfying day.

Laurence Worms has owned and run Ash Rare Books since 1971. He represented the antiquarian book trade on the (British) National Book Committee from 1993 to 2002 and has been six times an elected member of the Council of the Antiquarian Booksellers’ Association. He was largely responsible for drafting the Association’s Code of Good Practice first introduced in 1997 (and its recent update), served as Honorary Secretary of the Association from 1998 to 2001 and as President from 2011 to 2013. He is a former member of the Council of the Bibliographical Society and continues to serve on the Council of the London Topographical Society. He writes and lectures on various aspects of the history of the book and map trades, and has lectured at the universities of Cambridge, London, Reading and Sheffield, as well as at the Bibliographical Society, the Royal Geographical Society, the Warburg Institute, the National Library of Scotland and at Gresham College and Stationers' Hall. He teaches annually at the London Rare Book School, University of London. Published work includes the compilation of fourteen ‘lives’ for the “Oxford Dictionary of National Biography”, a number of articles for “The Oxford Companion to the Book” and the chapter on early English maps and atlases for the fourth volume of “The Cambridge History of the Book in Britain”. Essays on the British map trade are also appearing in “The History of Cartography” published by the University of Chicago Press. His long-awaited “British Map Engravers”, co-written with Ashley Baynton-Williams, was published to critical acclaim in 2011. He also contributed the numerous biographical notes to Peter Barber’s hugely successful “London : A History in Maps”, co-published by the British Library and the London Topographical Society in 2012.
View all posts by Laurence Worms - Ash Rare Books →
This entry was posted in Book Collecting, Booksellers and tagged Adam Yates, Andrew Sharpe, Bolton Abbey, Fine Books at Ilkley, Grove Rare Books, Ilkley, Paul Williams, Yorkshire Dales. Bookmark the permalink.