Blog on the Tyne

Up in Newcastle last week, so long a favourite city, to attend a memorial service for the late Alex Fotheringham (1940-2012).  A good bookseller, in many ways an exceptional bookseller  – and an excellent turnout of friends, colleagues and booksellers from all over the country to honour him at the splendid Literary and Philosophical Society of Newcastle upon Tyne (aka the Lit & Phil – the largest independent library in the country outside of London).  The local trade – Robert Steedman and Anthony Smithson – Charles Cox up from Cornwall, Alan Grant and Domnhall MacCormaig down from Scotland, Paul Grinke from London and ABA Secretary John Critchley too, Peter Miller and Tony Fothergill from York – Janette Ray as well – so many more.

A worthy setting as we listened to tributes from family and friends.  Particularly moving was a bookseller’s tribute from Charles Cox – witty, wise, perfectly judged and perfectly timed – a celebration and a valediction.  There was music too – an eclectic mix to match Alex’s own omnivorous tastes: from Handel to James McMurtry and Northumbrian pipes.  So great a loss.  It was a common theme as we chatted afterwards that there was so much of his life we hadn’t known – I suppose almost all of us went away wishing we had known him better. 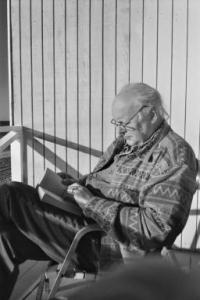 In truth, I didn’t know him at all well.  Our paths crossed of course, certainly from the time he was working at Marlborough Rare Books in the 1980s, and from then on frequently at bookfairs – but our tastes differed.  Someone said of him that he never bought an obvious and well-known book, preferring books which needed research, explanation and a gradual unfolding and building of value.  For my own part, I’m afraid that it’s generally a case of the more blindingly obvious and well-known the better (although I’m always happy to throw in some copy-specific research).  Someone else said that they were always a little in awe of him – he sometimes appeared to know more about everything than everyone.  I understood what they meant and I think some of us were perhaps a little wary.  But I remember how kind and courteous he was when last we spoke – highly (and unnecessarily) complimentary about the way the presidency was shaping.  I’d agreed that I would get up to Northumberland to visit him over the summer – a visit now never to be.  Farewell, Alex.  Rest in peace.

I stayed up in Newcastle overnight.  A quiet supper with David Steedman (Robert D. Steedman), a friend and colleague over many years, and then in the morning he picked me up from my hotel (perfectly adequate, not expensive, bathroom actually big enough to put a bath in, not so difficult northern hoteliers) and drove me out to his pleasant house in Gosforth for a visit to his bookroom.  Some years now since David closed the shop in Grey Street in the middle of Newcastle – always one of my favourites, always so immaculately tidy (how do you do that)?  The bookroom is just what you would expect – neat, calm, cared for, the books all (and I know it’s an old fashioned word, but it’s the right and only one) ‘choice’ – each just simply a delightful example of what it is.  Strong in all the things that the shop used to be – older literature, handsome sets, natural history, voyages and travel, local history and field sports.

A certificate on the wall records that the firm (founded by David’s grandfather in 1907) has been in the ABA for a hundred years, and there is that sense of breeding and taste that typifies the born bookseller.  Nothing out of place, nothing amiss, nothing less than fine  – and David’s elegantly pencilled notes to grace the books.  A pleasant half hour and some modest purchases. 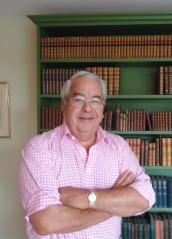 It’s strange that of all the books we have handled over the years, there is one that sticks in both our memories – an Elizabethan anthology of poetry with a handful of Shakespeare poems I bought from David what? – twenty, twenty-five, possibly even thirty years ago?  Certainly the only thing I have ever owned which could even in this marginal sense be called a lifetime edition of Shakespeare.  Why on earth did I ever sell it?  But I suppose the children had to eat.

David, who is exceptionally kind and generous, then drove me over to North Shields to see Anthony Smithson (Keel Row Bookshop).  Good to see a busy and thriving bookshop – stock piled high to the rafters.  Action and energy.  Customers coming in with every expectation of finding things.  “Yes – we’ve probably got a copy of that” is the routine answer.  Interesting books all along that lovely borderline between the good second-hand and the genuinely collectable.  And much better things too.  Stock in depth – 50,00 volumes perhaps.

Anthony took over the shop some five or six years ago.  He’s completely renovated it – completely restocked it.  And there’s a gleam in his eye (which just might betoken a move to a shop bang in the middle of Newcastle one day).  Some more modest purchases (the bank balance is a little thin, again) and then we collect his charming wife Alice from the packing facility and adjourn for lunch in Tynemouth.  Over lunch we discuss what Anthony has really set his heart on – the establishment of the York Antiquarian Book Seminar (see York Book Fair 2012 (Saturday) below).  Based on his own experiences of attending the summer course our American colleagues run every year in Colorado, adapted to British circumstance and tacked on to the York Book Fair.  We’ve now had some preliminary costings from Peter Miller (Ken Spelman) in York – and there seems nothing other than a lack of enthusiasm that might stop it happening.

And Anthony’s certainly not lacking in enthusiasm.  A good man – and he paid for lunch (actually it was Alice, thank you both).  We discuss possible topics, possible lecturers, possible ways of publicising it, the target audience, the involvement of the ABA and the PBFA – and we readily agree on all the essentials.  It has to be pitched at the right level.  It has to be hands-on, pragmatic and practical.  It has to be friendly and approachable.  It has to be a way into the mainstream booktrade for the internet generation.  And we need to involve that younger generation.  We need to rebuild our roots – to rekindle the cavalier and amicable spirit that brought Alex Fotheringham, Charles Cox, Peter Miller, myself, and so many others to the trade forty or so years  ago.  It’s the same thinking that lies behind the present proposals for associate membership of the ABA.  Watch this space.

Laurence Worms has owned and run Ash Rare Books since 1971. He represented the antiquarian book trade on the (British) National Book Committee from 1993 to 2002 and has been six times an elected member of the Council of the Antiquarian Booksellers’ Association. He was largely responsible for drafting the Association’s Code of Good Practice first introduced in 1997 (and its recent update), served as Honorary Secretary of the Association from 1998 to 2001 and as President from 2011 to 2013. He is a former member of the Council of the Bibliographical Society and continues to serve on the Council of the London Topographical Society. He writes and lectures on various aspects of the history of the book and map trades, and has lectured at the universities of Cambridge, London, Reading and Sheffield, as well as at the Bibliographical Society, the Royal Geographical Society, the Warburg Institute, the National Library of Scotland and at Gresham College and Stationers' Hall. Published work includes the compilation of fourteen ‘lives’ for the “Oxford Dictionary of National Biography”, a number of articles for “The Oxford Companion to the Book” and the chapter on early English maps and atlases for the fourth volume of “The Cambridge History of the Book in Britain”. Essays on the British map trade are also appearing in “The History of Cartography” published by the University of Chicago Press. His long-awaited “British Map Engravers”, co-written with Ashley Baynton-Williams, was published to critical acclaim in 2011. He also contributed the numerous biographical notes to Peter Barber’s hugely successful “London : A History in Maps”, co-published by the British Library and the London Topographical Society in 2012.
View all posts by Laurence Worms - Ash Rare Books →
This entry was posted in Book Collecting, Booksellers, Bookshops and tagged Alex Fotheringham, Anthony Smithson, Bookselling, David Steedman, Newcastle, North Shields, Tynemouth. Bookmark the permalink.