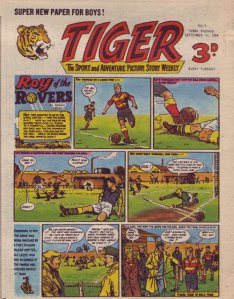 Roy of the Rovers

Comics to me have always been associated solely with childhood and early attempts at pictorially assisted reading.  Moving on from Desperate Dan and Dennis the Menace (never really understood that whole Beano/Dandy rivalry), carefully skirting round the significantly more menacing Beryl the Peril, at all costs trying to avoid the more improving varieties of comic well-meaning parents and sometimes aunts would try to foist on us – the Eagle was founded by a vicar, for heaven’s sake – we arrived at those happy and wholesome days of Roy of the Rovers in the Tiger and the amazing Wilson the Wonder Athlete in (I think) the Wizard.  Then, our core values for better or for worse now firmly set, our intuitive understanding of the British class system polished and perfected by Lord Snooty and his pals, we discovered books.  And moved on. 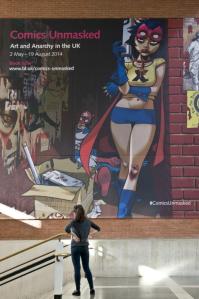 The new Comics Unmasked : Art and Anarchy in the UK exhibition at the British Library compels a rethink. Comics aren’t just for kids the curators tell us right at the outset.  And of course they are not.  Elsewhere in the world – in the USA, in Japan, across Europe – they are far more part of the cultural mainstream.  Yet the British contribution has been and is immense.  Their impact on our lives is greater than we always recognise. Thanks to copyright deposit, the BL’s collections are unrivalled.  Time to get these things out of storage and re-examine them.

Picture-driven narratives date back to the walls of prehistoric caves.  Take a look at the marriage of pictures and text in Egyptian tomb-paintings or in mediaeval manuscripts.  Look again at the Bayeux Tapestry.  The comic strip has a very distinguished ancestry.  The oldest item in the exhibition is actually a German block-book of the 1470s (no picture in the press pack, I’m sad to say) – because this Book of the Apocalypse has everything modern about the comic or comic book already in place: narrative via diagrammatic drawings in sequential panels; expository captions; speech and thought balloons; angels and dragons for good measure – it’s a comic.

Adrian Edwards, the British Library’s Head of Printed Historical Resources and one of the three curators of the exhibition, was telling me about it when I saw him the other week.  I have to say I remained slightly sceptical, but when he was explaining it again today to a wider audience and had it open in front of him, there was no gainsaying what he said – it’s a comic.  I happened to exchange a glance with Roly Keating, head of the BL, at this point.  He was persuaded too.  Go and see it.

More or less everything else in the exhibition is British, the 200 or more items on display broken up into six broad themes.  Mischief and Mayhem offers a thought-provoking look at the boundaries of acceptable, slapstick, comic-book violence and real-world violence.  Thoughts too on censorship.  As far as we know, the first ever British exhibition of comics was put on by the National Union of Teachers in 1954.  Not, as you might think, to promote comics as congenial aids to reading, but in an attempt to ban children from access to this harmful and damaging material.  Although they managed to promote an Act of Parliament, the whole thing backfired and made comics more popular than ever – but that’s the NUT for you.

What does come across though is how subversive some comic characters are.  Dennis the Menace we know, but the first great comic superstar was Ally Sloper, dissolute, bottle-nosed, Cockney chancer, forever sloping off down alleyways to avoid unfortunate consequences – the absolute antithesis of the decent, upright and self-improving working man.  The Victorians adored him from his first appearance in Judy in 1867, written by Charles Ross and illustrated by his wife Emilie de Tessier under her Marie Duval pseudonym.  The eventual spin-off, Ally Sloper’s Half-Holiday, began publication in 1884 and is thought to have clocked up sales of 350,000 a week.  We are used to comic characters being turned into films – Ally Sloper was even before 1900.

It was at just about this period that we began to call these things comics.  Alfred Harmsworth’s Comic Cuts, which began publication in 1890 seems to have sealed if not actually created the usage (OED cites one slightly equivocal example from 1889).

The To See Ourselves section of the exhibition examines the way social values, social types and stereotypes, are portrayed in comics.  Not hard to see that the prejudices, tacit assumptions, weaknesses and blind-spots of each generation will bob to the surface, but there is the occasional surprise.  I was never a fan of the interminable Dan Dare (The story so far … To be continued), but I did enjoy Adrian’s account of how for episode after episode after episode there was a shadowy, but brainy and powerful ‘Professor’ in the background, often mentioned but never seen.  When finally the professor appeared, it was as a woman – and a young one.  That must have woken a few boys up back in the sleepy and unthinking 1950s.

Politics: Power and the People gets to the nub of the matter with a display showing the development from satirical print to satirical comic.  As an effective way of dramatising a message, comics have been used by campaigning groups from the Suffragettes to the Anti-Nazi League. The Suffragette What a Woman May Be poster is worth a visit on its own (again, frustratingly, no picture). The impact of Raymond Briggs’ When the Wind Blows, seen and displayed here as an early graphic novel,  is undeniable.

Some of the more recent comic treatments of our lords and masters truly have the power to make us wince.  The mask created by Alan Moore and artist David Lloyd for their V for Vendetta comic strips of thirty years ago and latterly adopted by the Occupy movement is a ubiquitous presence on mannequins throughout the exhibition – this is genuinely all quite anarchic.

Not strictly relevant (and something I just now chanced across in my doctor’s waiting room), but fascinating to note that Alan Moore these days lives without internet connection, mobile telephone or even television signal, preferring to remain outside the human Petri dish and watch from the outside how the rest of us are mutating under the influence of too much information. 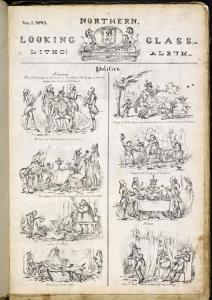 It was in the Politics section that I found what we tend to regard as the first comic proper in the modern sense, The Glasgow [later Northern] Looking Glass of 1825-1826, produced by John Watson of George Street, Glasgow.  I actually knew of this as Watson also lithographed a few maps.  He features in “British Map Engravers”, where we rather primly refer to the Looking Glass as a ‘caricature journal’.  Highly satirical, I’m pleased finally to have seen it.

The next section is given a parental guidance warning and is hived off in a corner so that children and young persons can swiftly be escorted past.  I’m frankly dubious about how successful a ploy this may prove – labelling the corner Let’s Talk About Sex in large letters and priming it to give off a hot pink glow could possibly be counter-productive.  At this point, possibly fortunately, I had mislaid my spectacles, so I can’t tell you too much.  I misread the title of this magazine as Horrid, Sordid and Torpid before getting it right – although I’m not entirely sure I was altogether wrong.

Part of the exhibition are previously unheard recordings of the 1971 Oz obscenity trial, which created such a furore.  It seemed at the time like a full-on clash between the generations, that the full weight of the establishment was being thrown at any kind of freedom of expression, that all the butterflies were to be broken on as many wheels as it took.  Looking back, I’m not sure that Oz would find so many defenders now – certainly not the Jailbait of the Month feature. 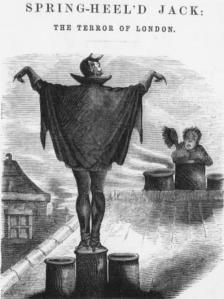 Comics are really all about heroes and superheroes – and here they are in the Hero with a Thousand Faces section.  But yet again all is not as straightforward as it seems.  The antecedents, in this country at least, are very clearly not the heroes but the anti-heroes of the penny-dreadfuls – Dick Turpin of course and Spring-Heeled Jack, The Terror of London.   Slyly inserted in the Batman display is a Victorian image of Jack – arms outstretched to the London rooftops, cape unfurled – you see what I mean.  I’m not sure whether it fully comes across in the exhibition, but Adrian makes I think a valid point in pointing out that British comic heroes often have a dark, or at least a vulnerable side, rarely evident in their American counterparts – and where these aspects do become part of an American character, there are usually British artists and writers involved (there was something of a British invasion of the American comics industry in the 1980s).

The final section is called Breakdowns: The Outer Limits of Comics.  Somehow both John Dee and Aleister Crowley are summoned up as part of continuing tradition of comic magic.  It seems a tenuous connection at best, but maybe I missed something.  The curators were by now off into raptures about twenty-first century interactive hypercomics on the internet and I was getting lost.  They have apparently been able to resurrect the long-defunct and near legendary Club Salsa internet comic from 1996.  I take their word for it that this is good news.

There is a great deal more to the exhibition than I have suggested.  Much of it relatively modern, essentially curated by fans and practitioners (John Harris Dunning and Paul Gravett) for fans.  If the original artwork for Jamie Hewlett’s Tank Girl – not so remote descendent of Beryl the Peril – or Judge Dredd’s film helmet is your thing, then you won’t need me to persuade you and you will already have booked up for some of the allied talks by the modern masters.

But even if you are an old boy like me,  who hasn’t read a comic in fifty years or more, you will find this exhibition thought-provoking and full of interest. Some of the graphics are stunning. Some of the feeling behind them is simply not to be ignored.  It’s on until August – off you go.

Laurence Worms has owned and run Ash Rare Books since 1971. He represented the antiquarian book trade on the (British) National Book Committee from 1993 to 2002 and has been six times an elected member of the Council of the Antiquarian Booksellers’ Association. He was largely responsible for drafting the Association’s Code of Good Practice first introduced in 1997 (and its recent update), served as Honorary Secretary of the Association from 1998 to 2001 and as President from 2011 to 2013. He is a former member of the Council of the Bibliographical Society and continues to serve on the Council of the London Topographical Society. He writes and lectures on various aspects of the history of the book and map trades, and has lectured at the universities of Cambridge, London, Reading and Sheffield, as well as at the Bibliographical Society, the Royal Geographical Society, the Warburg Institute, the National Library of Scotland and at Gresham College and Stationers' Hall. Published work includes the compilation of fourteen ‘lives’ for the “Oxford Dictionary of National Biography”, a number of articles for “The Oxford Companion to the Book” and the chapter on early English maps and atlases for the fourth volume of “The Cambridge History of the Book in Britain”. Essays on the British map trade are also appearing in “The History of Cartography” published by the University of Chicago Press. His long-awaited “British Map Engravers”, co-written with Ashley Baynton-Williams, was published to critical acclaim in 2011. He also contributed the numerous biographical notes to Peter Barber’s hugely successful “London : A History in Maps”, co-published by the British Library and the London Topographical Society in 2012.
View all posts by Laurence Worms - Ash Rare Books →
This entry was posted in Book Collecting, Exhibitions and tagged British Library, Comics. Bookmark the permalink.