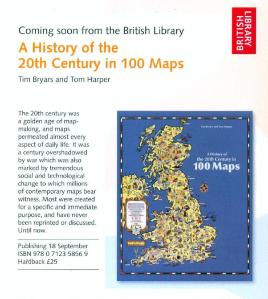 An unwonted spell of quiet here on the blog lately.  Apologies for that – but not entirely from lack of activity.  A bit of holiday and a long-postponed attempt at reading The Alexandria Quartet in its entirety aside, head and hands have both been full with a variety of projects:  a stint of teaching at the London Rare Books School, with a resultant essay to be guided; sorting out issues on the ABA website;  keeping an eye on the ABA Twitter account;  putting together a manual (of sorts) on book-cataloguing for booksellers;  a stupid row with the entirely ridiculous NatWest Bank;  delving away into the recondite by-ways and back-alleys of post-war British pulp fiction (more on that next week);  planning a couple of bookish safari trips for August (one northern, one western);  trying to pull together the speakers for the coming year’s monthly Senate House seminars on book-collecting – a splendid line-up already in prospect:  Tim Bryars and Tom Harper (British Library) this October on twentieth-century maps – this roughly to coincide with the publication of their “A History of the Twentieth Century in 100 Maps” at the end of September.  I’ve seen some advance proofs: it’s an amazing and extraordinarily impressive book, which will challenge and change some of our assumptions both about the history of the twentieth century and the way in which we use maps.  That’s the Christmas presents sorted for all of you. 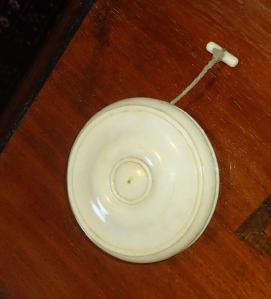 I can’t get hold of Stephen Foster, who is away on holiday, but a decision made in his absence and (like it or not) he’ll be speaking at Senate House in November;  Christopher Sokol in December – topic to be confirmed;  Neil Pearson in January – on the Paris pornographers, the cultural atmosphere of Paris between the two World Wars, and its contribution to the defeat of literary censorship;  Charles Cox in April on the Galsworthy Bubble and other freaks of fashion in book-collecting;  both Christopher Edwards and Sophie Schneideman to be slotted in somewhere, a couple of others pending. 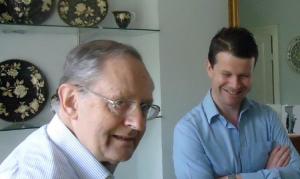 A day off from all of that yesterday – one of those delightful days which we all need to refresh and reinvigorate the spirit.  A day with Adrian Seville in the company of Ashley Baynton-Williams and Tom Harper from the British Library (and ex Jonathan Potter).  Adrian is of course one of the great collectors of our time – a man who has marked out his field, enriched it, changed the way we view it, and built a new research resource almost certainly unmatched in any institutional collection.  His collection of printed games is quite magnificent and will be duly honoured with an exhibition at the Grolier Club in New York in 2016. (Many of the games are illustrated on the Giochi dell’Oca website, link in the blog-roll).

And of course it is only in seeing the games all together and studying their similarities, their development and, crucially, their subtle or not-so-subtle differences, that we realise how much we can learn from them.  They mirror their times in both predictable and wholly unexpected ways,  and when Adrian describes himself as a cultural historian – that is precisely what he is.

It was a day spent in discussing engravers, printers and publishers (huge overlap with the map trade, of course), but also in unlooked-for and unexpected connections between the British trade and its continental counterparts.  One newly acquired game had thrown up a previously unknown maker – Dewhirst & Co. of London with a very sophisticated game dating from the time of the American Civil War. 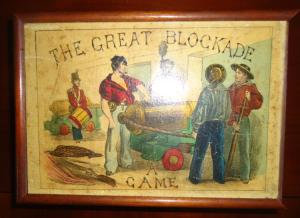 A game in which risk is calculated with unusual delicacy, but also one which is a whole history lesson in itself.  (Dewhirst proves stubborn – a very unusual name in London at that date, but so far I have only been able to identify a carpenter, a schoolmaster and a needlewoman – none of whom seem particularly likely to have produced this: more work to be done, this not aided by the ridiculous decision of the COPAC authorities to disable for the time being the best part of its search mechanism).

Conversation shaded off into discussion of the mystical powers attributed to individual numbers in the past, numerology and the Cabala; the extraordinary longevity of the Game of the Goose; the significance of the death-square; geographical games; map-based games; geographical playing-cards; games of the seasons; the earliest London-published map of London (on a playing-card?);  the significance of decoration; the history of ballooning; the Jansenist heresy (one extraordinarily heretical game);

politics, satire, travel and sport; the representation of games in art; the origins of the skull-and-crossbones symbol; paddle-ships; the Thief-Taker General; the pricing of rare and possibly unique material; the unforeseen consequences and the effect of bibliographies on pricing and the market; the foibles of some of our colleagues; the Americas Cup; a 200-year old ivory yo-yo, and a guessing game as to who the apparently real people were whose portraits were given on a 1790 English game on the ages of man. Here’s “The Geographer” – any suggestions? 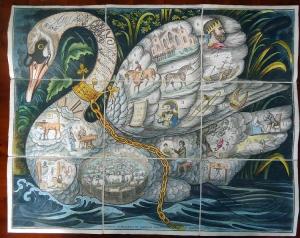 I was very pleased to be able to add this magnificent beast to the collection – William Darton’s 1821 Noble Game of the Swan.  An example of the game with a pleasant little history of its own: it once belonged to Percy Muir, ABA President in 1946-1947, and was item No. 961 in Muir’s catalogue of the National Book League’s May 1946 exhibition of Children’s Books of Yesterday.  It was a ground-breaking exhibition, with the foresight to include games, puzzles and peep-shows, and the present game not only still has its beautifully hand-coloured card case, but its printed rules and even its 1946 exhibition label.

Nor was this Adrian’s only purchase of the day: arriving at about the same time as we did was this delightful game in a 1933 issue of the French magazine Vu.  For all its twentieth-century trappings of automobiles and sharp photography, it’s a traditional Game of the Goose – the death-square here in the form of a caped gendarme ready to inflict dire consequences on speeding or careless motorists (and even a suggestion of paradise as a giant car-park).

Yet another recent acquisition (this collection is still growing) was this humdinger of a London game bought from Robert Frew at the recent London Map Fair (I may just possibly be able to put my hands on another one of these if anyone’s interested).  All in all, a nigh-on perfect summer’s day.  Good company, good friends, and a community of interests.  Thank you Adrian – already looking forward to the next visit.

Laurence Worms has owned and run Ash Rare Books since 1971. He represented the antiquarian book trade on the (British) National Book Committee from 1993 to 2002 and has been six times an elected member of the Council of the Antiquarian Booksellers’ Association. He was largely responsible for drafting the Association’s Code of Good Practice first introduced in 1997 (and its recent update), served as Honorary Secretary of the Association from 1998 to 2001 and as President from 2011 to 2013. He is a former member of the Council of the Bibliographical Society and continues to serve on the Council of the London Topographical Society. He writes and lectures on various aspects of the history of the book and map trades, and has lectured at the universities of Cambridge, London, Reading and Sheffield, as well as at the Bibliographical Society, the Royal Geographical Society, the Warburg Institute, the National Library of Scotland and at Gresham College and Stationers' Hall. Published work includes the compilation of fourteen ‘lives’ for the “Oxford Dictionary of National Biography”, a number of articles for “The Oxford Companion to the Book” and the chapter on early English maps and atlases for the fourth volume of “The Cambridge History of the Book in Britain”. Essays on the British map trade are also appearing in “The History of Cartography” published by the University of Chicago Press. His long-awaited “British Map Engravers”, co-written with Ashley Baynton-Williams, was published to critical acclaim in 2011. He also contributed the numerous biographical notes to Peter Barber’s hugely successful “London : A History in Maps”, co-published by the British Library and the London Topographical Society in 2012.
View all posts by Laurence Worms - Ash Rare Books →
This entry was posted in Book Collecting, Engravers, Mapsellers and tagged Adrian Seville, Ashley Baynton-Williams, Board Games, British Library, Collecting, Collectors, Seminars on Book Collecting, Senate House, Tom Harper. Bookmark the permalink.