Invariably a pleasure to go along to the annual Designer Bookbinders prize-giving evening.  Always interesting work to be seen and interesting people to talk to.  I had already been fortunate enough to have seen and been able to handle most of the books at the judging day a few weeks ago, which gives a certain advantage – books and bindings need to be handled to be fully appreciated.  But they can also look quite different when show-cased and put on display.  An example of that is this binding by Kaori Maki (Sundrie Pieces by George Herbert) which very deservedly won one of the Antiquarian Booksellers’ Association’s Highly Commended Certificates (judged by current President Angus O’Neill of the Omega Bookshop).

I hadn’t really noticed the binding on the judging day – I can’t actually recall seeing it (and may actually not have done) – but lit up and on show it is quite superb, giving at once both the impression of being carefully sculpted and of being fully alive.  You can see it along with other bindings from the competition at the St. Bride Foundation in Bride Lane, off Fleet Street, until 27th November. 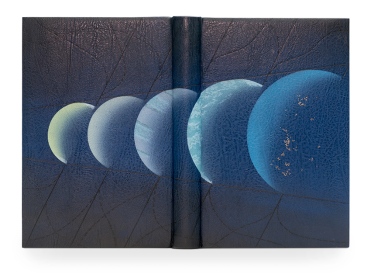 Another of the ABA’s Highly Commended Certificates went to this equally deserving binding by Glenn Malkin on this year’s set book (The Illustrated Man by Ray Bradbury).  This one I had seen earlier and fully concurred with our President’s judgement.

The set books are supplied by the Folio Society and the Society’s own first prize for Best Set Book went to Mel Jefferson. 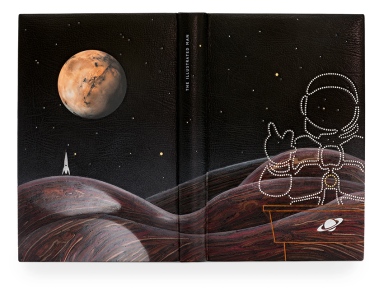 This is the book which then went on to win the Mansfield Medal for the Best Book in the entire competition.  Mel Jefferson also won the Harmatan Leather Prize for another quite different binding (you can see it, along with all the other prize-winners on the Designer Bookbinders website).

The runner-up for the Folio Society Prize went to Gillian Stewart for the binding below, which personally I liked just as much (a little more actually). 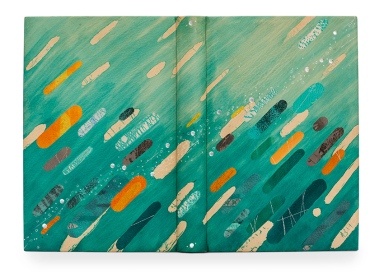 I was also rather taken by Miranda Kemp’s take on the set book, which won the St. Bride Foundation Prize for Finishing, although I seem to think it was being displayed the other way up at St. Bride’s last night.

But the binding I liked the best of all was Clare Bryan’s interpretation of The Illustrated Man.  I gave it my own Ash Rare Books Lettering Award for its imaginative use of letters and numbers, fully integrated into the overall design, and for its innovative use of technology – the design was somehow printed directly on to the leather in a technique I’m not sure I’ve come across in bookbinding before.  Not conventional tooling by any means, but innovative and beautifully executed.

And – of course – what you can’t possibly see here is the way the book comes alive as it slides out of its slip-case – as it slips past a diagonally striped transparent screen, the figures really do seem to flicker into life.  An immensely satisfying piece of work and – the whole binding extremely well made and perfect for the text inside – and, had I had a say in it, it would have been given a bigger prize still.

Laurence Worms has owned and run Ash Rare Books since 1971. He represented the antiquarian book trade on the (British) National Book Committee from 1993 to 2002 and has been six times an elected member of the Council of the Antiquarian Booksellers’ Association. He was largely responsible for drafting the Association’s Code of Good Practice first introduced in 1997 (and its recent update), served as Honorary Secretary of the Association from 1998 to 2001 and as President from 2011 to 2013. He is a former member of the Council of the Bibliographical Society and continues to serve on the Council of the London Topographical Society. He writes and lectures on various aspects of the history of the book and map trades, and has lectured at the universities of Cambridge, London, Reading and Sheffield, as well as at the Bibliographical Society, the Royal Geographical Society, the Warburg Institute, the National Library of Scotland and at Gresham College and Stationers' Hall. Published work includes the compilation of fourteen ‘lives’ for the “Oxford Dictionary of National Biography”, a number of articles for “The Oxford Companion to the Book” and the chapter on early English maps and atlases for the fourth volume of “The Cambridge History of the Book in Britain”. Essays on the British map trade are also appearing in “The History of Cartography” published by the University of Chicago Press. His long-awaited “British Map Engravers”, co-written with Ashley Baynton-Williams, was published to critical acclaim in 2011. He also contributed the numerous biographical notes to Peter Barber’s hugely successful “London : A History in Maps”, co-published by the British Library and the London Topographical Society in 2012.
View all posts by Laurence Worms - Ash Rare Books →
This entry was posted in Book Collecting, Bookbinders, Exhibitions and tagged Bookbinders, Bookbinding, Designer Bookbinders, St. Bride Foundation. Bookmark the permalink.