Illustrations by A. J. Macgregor / Verses by E. M. Coghlin

A guest post by Gillian Neale. Gillian has an MA in the History of the Book from the University of London and is spending time with Ash Rare Books to gain some inside experience of the rare book trade. 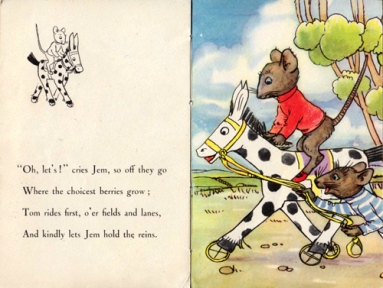 “Creating a bibliographic record suitable for a bookseller’s catalogue,” Laurence  remarked “usually takes no more than ten minutes”.  I remain some way off this target, not least because, like my eminent cataloguing tutor himself, I suspect, I can happily spend many multiples of ten minutes in pursuit of the back-story behind little-known titles, authors or illustrators — those nuggets of information that enrich any book’s history and (once in a while) have the potential to enhance its saleability.  Nonetheless, as Laurence reminds me, a bookseller has to strike an economic balance, and a book’s value necessarily determines how much background research can be justified before it is appropriately catalogued and shelved.  Sometimes, however, the suggestion of more to be discovered lingers on, as it did with the illustrator/author partnership behind “Jeremy’s Day in the Country” (1941), a very early Ladybird Book that refused to ‘fly away home’. A. J. Macgregor and E. M. Coghlin both proved sufficiently elusive that I continued my online research after office hours. Who were these women and what was their story?  It might be worth a post on the blog, suggested Laurence in an email. 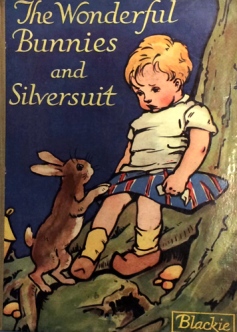 “The Wonderful Bunnies and Silversuit” (1927). © The British Library Board.

Ladybird Books and their founding firm, Wills & Hepworth, have well-documented places in the history of children’s books.  The books themselves have attained iconic, although not uncriticised, status, and in recent years have provided a seemingly endless stream of material for television and radio documentaries, exhibitions, websites, blogs and Twitter feeds, as well as the twenty-first century ‘spoof’ series for adults.  But attention has largely been directed on Ladybird’s explosive post-war growth and success, and the staff, writers and artists who contributed to that, rather than on its very earliest authors and illustrators.  These are Angusine Jeanne Macgregor (1879-1961) — responsible for the illustration of all the earliest titles — and Edith Mary Coghlin (1913-2012) — responsible for the verses in “Jeremy’s Day in the Country” and two (or possibly three) more of the first half dozen Ladybird Books ever to be published — the wartime titles in Ladybird’s first numbered series, 401, of rhyming animal stories.  Whilst the Ladybird imprint had been in existence since 1914, the company had chosen the 1940 launch of the standard format book as the date from which to officially recognise the birth of the Ladybird Book. 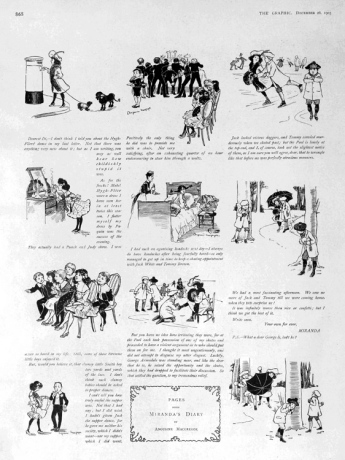 Angusine Jeanne Macgregor came, as her name suggests, from Scottish parentage.  Her father, Angus Macgregor, was a farmer’s son from Laggan in the Central Highlands of Scotland; her mother, Jeanne Chisholm, was born in the same hamlet.  Forsaking farming for the drapery trade, Angus Macgregor moved south and became a commercial traveller.  After stints in Worcester and at Herne Hill in South London, he settled his family in 1881 in Birmingham, where Angusine, the sixth of six daughters, was born in the suburb of Harborne in 1879, as was the seventh child and only son, Peter Chisholm Macgregor, who died in infancy.  The household was by then sufficiently well-off to accommodate both a live-in lady’s maid and domestic servant. In due course Angusine went on to study at Birmingham School of Art and subsequently to become an illustrator and writer of children’s books.  From July 1917 to July 1919 she served as housekeeper with the Scottish Women’s Hospital in Ajaccio, Corsica, then returned to the family home in Birmingham, from where she continued to work as an illustrator. She never married and died at the Parkfield Nursing Home in Birmingham on 26th February 1961. 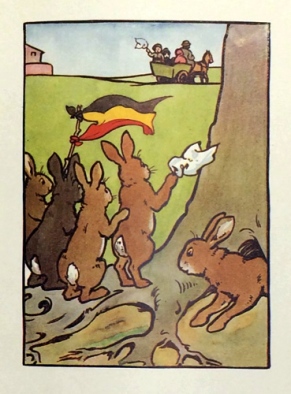 “Mrs Bunny’s Refugee” from “The Wonderful Bunnies and Silversuit” (1927). © The British Library Board.

Her earliest known published work is a full-page spread in “The Graphic” for 26th December 1903 titled “Pages from Miranda’s Diary” and from then until 1956 there were dozens of publications written by her or featuring her illustrations.   Closer examination shows a clear pattern of two main periods of output, 1903-1921 and 1940-1956.  Work from the latter period represents Angusine’s Ladybird output; the earlier works consist in the main of picture books for younger children with full-page, bright, bold illustrations accompanying simple texts, many in verse.  Early titles include “The Mysterious Disappearance of What and Why” (1905), “The Story of Snips” (1909), “The Bunny Book” (1909) — reviewed by “The Graphic” as “a sheer delight” — and “The Story of Flip and Fuzzy. A Picture-book for little folk”, with Jessie Pope, (1911).

What, Why, and Flip were young rabbits while Snips was a mouse and Fuzzy a toy golliwog, suggesting that from an early point in her career Angusine had developed a talent for creating engaging stories about anthropomorphised animals and toys, for which she would supply the illustrations and either the accompanying storyline or the full text.  Several of these stories proved extremely successful and were reprinted in later editions.

Among Macgregor’s non-anthropomorphic works are two “Bunty Books”, stories about a little girl who longs for “Someone to Play With” (1921), in this case a baby sibling who becomes the focus of a sequel — “The Losing of Baby- Brother” (1921).  Although slightly whimsical, these books are quite different in content and artistic style, rather more visually and textually satisfying — and not a walking, talking bunny in sight.  There appear to have been just the two Bunty books, which suggests the possibility that they were written in remembrance of her own short-lived baby brother, Peter.  Online searches also throw up Macgregor as a credited artist in a number of early twentieth-century children’s anthologies or annuals, including “The Children’s Friend” (1907), “Cassell’s Annual for Girls and Boys” (1909), Aunt Ruth’s “Frolic and Fun” (1909), “The Tiny Folks’ Annual” (1918), and “The Big ABC Book” (1921), where her work appeared alongside such well-known names as John Hassall, Charles Robinson, Millicent Sowerby and Louis Wain.  It is clear that Angusine’s pictures drove the storyline in the early books, whether she supplied the words or not, and this active engagement with shaping the text would continue for Wills & Hepworth, as acknowledged on the title page of her Ladybird Books (“written and illustrated by A. J. Macgregor”).  Looking at some of these early picture-verse books, it is easy to see how such child-friendly, sing-song tales of mischievous ducklings, mice, and other nursery-suitable animals and toys would evolve into the endearing and enduring series of eighteen Ladybird Books.  The reasons for the apparent hiatus in Angusine’s work are unclear, but her career revived with the invitation from Wills & Hepworth to work on their latest publishing venture, and this is where Edith Mary Coghlin comes in. 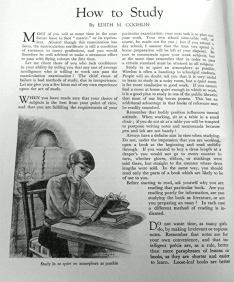 If there is little information about Angusine, Edith is positively cloaked in mystery. Daughter of James Edwin Coghlin (1874-1947), a customs officer, and his wife, Frances Alma Rowe (1881-1962), Edith was born on 11th January 1913 in Halifax, Yorkshire, and, like Angusine, was the second youngest of seven children.  Edith’s were a remarkably literate set of siblings.  Of her five brothers, three held degrees from Oxford; one edited “Cherwell” and had a novel published by Faber in 1932, one became a master at Ardingley College in Sussex, and another a journalist.  Furthermore, Edith’s sister, Mercy, was a teacher of English Language and Latin at Goole Grammar School. According to the emergency national register compiled in 1939, Edith, still living with her sister and parents, was an apparently out-of-work advertising copywriter.  Search for published works, and the only books that appear are the 1941 Ladybird titles for which she wrote the verses to accompany Macgregor’s illustrations: “Smoke and Fluff”, “Bob Bushtail’s Adventure” and “Jeremy’s Day in the Country”.  Other than this, all that can be identified are a story (“The Infectious Laugh”) broadcast on the radio in 1936 and an article called “How to Study” in “The Girl’s Own Paper” (1934, 55).  And although the Ladybird 401 series finally totalled eighteen titles, Edith was soon replaced by one Walter Perring.  It is difficult to conceive that Macgregor and Coghlin failed as a partnership, for there is little discernible difference between Coghlin’s verses and those of either Macgregor or Perring. Nonetheless, as each of the Coghlin titles was reprinted, her verses were revised by Perring, so that Coghlin’s work and name now exist only in the first editions of each book.

So what might Edith’s backstory be?  As a copywriter, it is conceivable that Coghlin had come to Wills & Hepworth’s attention via their commercial printing operations, although it is perhaps more likely that a connection at “The Girl’s Own Paper”, an RTS publication, initiated an introduction, for Wills & Hepworth had long been printers of books for religious publishers.

After her initial engagement on the Ladybird Books, given her well-connected brothers and copywriting skills, she may have volunteered or been selected for war work.  Equally, it might have been Wills & Hepworth’s decision not to produce any new Ladybird titles in 1942 or 1943, probably as a direct result of the additional paper rationing introduced in December 1941, that determined Edith to pursue other employment.  She was presumably the Edith Coghlin listed at 52 Portland Grove, Vauxhall, in South London, on the Electoral Register of 1949, but she was back in Yorkshire, living with her mother and sister by 1951.  Like Angusine, she never married, and continued living with her sister, Mercy Coghlin, until Mercy’s death, aged 101, in 2006.  The archival record is currently largely silent over the last fifty years of Edith Coghlin’s life until the report of her death in York on 9th January 2012 — two days short of her ninety-ninth birthday.

We would be pleased to add more, if anyone has further information.

Laurence Worms has owned and run Ash Rare Books since 1971. He represented the antiquarian book trade on the (British) National Book Committee from 1993 to 2002 and has been six times an elected member of the Council of the Antiquarian Booksellers’ Association. He was largely responsible for drafting the Association’s Code of Good Practice first introduced in 1997 (and its recent update), served as Honorary Secretary of the Association from 1998 to 2001 and as President from 2011 to 2013. He is a former member of the Council of the Bibliographical Society and continues to serve on the Council of the London Topographical Society. He writes and lectures on various aspects of the history of the book and map trades, and has lectured at the universities of Cambridge, London, Reading and Sheffield, as well as at the Bibliographical Society, the Royal Geographical Society, the Warburg Institute, the National Library of Scotland and at Gresham College and Stationers' Hall. Published work includes the compilation of fourteen ‘lives’ for the “Oxford Dictionary of National Biography”, a number of articles for “The Oxford Companion to the Book” and the chapter on early English maps and atlases for the fourth volume of “The Cambridge History of the Book in Britain”. Essays on the British map trade are also appearing in “The History of Cartography” published by the University of Chicago Press. His long-awaited “British Map Engravers”, co-written with Ashley Baynton-Williams, was published to critical acclaim in 2011. He also contributed the numerous biographical notes to Peter Barber’s hugely successful “London : A History in Maps”, co-published by the British Library and the London Topographical Society in 2012.
View all posts by Laurence Worms - Ash Rare Books →
This entry was posted in Book Collecting, Children's Books, Forgotten Artists, Forgotten Authors, Printsellers and tagged Angusine Jeanne Macgregor, Edith Mary Coghlin, Gillian Neale, Ladybird Books. Bookmark the permalink.