Here’s a curiosity – a hand-made and hand-painted dust-jacket individually made for a copy of A. G. Street’s “Holdfast”, published by Faber & Faber in 1946 – not to replace the original dust-jacket (a typical Faber design by Berthold Wolpe) but to go over it, leaving it wonderfully well-preserved beneath.

I bought it almost a year ago, privately convinced that somewhere in the far recesses of memory I somehow recognised the style and knew exactly who the artist was. Perhaps I do, but the name persistently and stubbornly refuses to come to mind, so I’ll throw it open to suggestions from elsewhere. Any ideas? 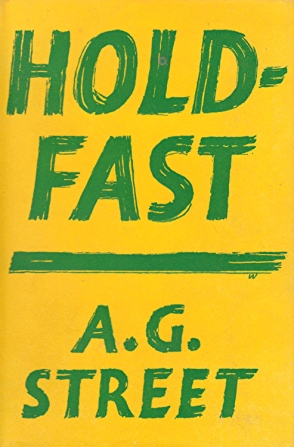 The novel is the story of a young woman finding herself when, newly married, she is left to run a wartime farm (600 acres somewhere in the West Country) while her husband is on active service overseas. Against the odds and almost despite herself at times, she succeeds – innovating with new technology, adopting new strategies, switching to arable rather than dairy (the green and gold of the Wolpe jacket echoes the contrast between pasture and cornfield), battling with bureaucrats, and circumventing the challenges both of land-girls and handsome officers in uniform. She becomes acknowledged as the best farmer in the neighbourhood before having to negotiate a formidable final hurdle – the return of her husband to a farm no longer recognisable as his own.

“Holdfast” is a new variety of wheat, but serves as a motif for holding true to principle, to perennial values, for endurance, gumption and grit. The author, Arthur George Street (1892-1966), was a farmer himself of course and someone who knew about holding fast. He’d left school at sixteen – “my father made me do every job on the farm at some time or another in order that I might, from personal knowledge, be able to estimate whether a man was working well or ill at any particular job. I was much older before I realised how much I did learn in those first years after leaving school”. He turned to writing to eke out his earnings when farming prices collapsed in the interwar depression.

By 1946 he had become well-known as both an author and a popular wartime broadcaster. Urban reviewers were a little overwhelmed by the both the minutiae and the daily grind of farming, but the Exeter & Plymouth Gazette (3rd January 1947) knew the worth of this West Country author – “a novelist of the first rank … In the six years between his last novel and ‘Holdfast’. Mr. Street has encountered many new experiences … The cream of it is here set forth in great good humour and, if one may say it for want of a better word, tenderness. This is a book to read and re-read at leisure.”

He was in truth a remarkably good writer – the Faber imprint is probably sufficient indication of that – flavouring his prose with the occasional deliberate lapse into the Wiltshire dialect of his youth. This is a rock-solid, thoroughly professional, beautifully constructed novel – a novel of delicately defined contrasts – between the green and the gold, between old ways and new, between men and women, between youth and age, between workers and employers, between producers and consumers, between the useful members of society and the jacks-in-office of bureaucracy. It’s full of the old-fashioned virtues and now – of course – wholly forgotten because it is so old-fashioned.

But it once meant enough to someone to spend time, trouble, and no little skill in fashioning a personal and artistic tribute in the form of this hand-made jacket. As an image, it seems to reflect the rustic spirit and themes of the novel rather than relate to any particular incident – although the elderly couple in the centre must be the Ferrises, young Phoebe Carpenter’s mentors both in farming and life, and the flighty land-girls outside the pub are recognisable enough.

Laurence Worms has owned and run Ash Rare Books since 1971. He represented the antiquarian book trade on the (British) National Book Committee from 1993 to 2002 and has been six times an elected member of the Council of the Antiquarian Booksellers’ Association. He was largely responsible for drafting the Association’s Code of Good Practice first introduced in 1997 (and its recent update), served as Honorary Secretary of the Association from 1998 to 2001 and as President from 2011 to 2013. He is a former member of the Council of the Bibliographical Society and continues to serve on the Council of the London Topographical Society. He writes and lectures on various aspects of the history of the book and map trades, and has lectured at the universities of Cambridge, London, Reading and Sheffield, as well as at the Bibliographical Society, the Royal Geographical Society, the Warburg Institute, the National Library of Scotland and at Gresham College and Stationers' Hall. He teaches annually at the London Rare Book School, University of London. Published work includes the compilation of fourteen ‘lives’ for the “Oxford Dictionary of National Biography”, a number of articles for “The Oxford Companion to the Book” and the chapter on early English maps and atlases for the fourth volume of “The Cambridge History of the Book in Britain”. Essays on the British map trade are also appearing in “The History of Cartography” published by the University of Chicago Press. His long-awaited “British Map Engravers”, co-written with Ashley Baynton-Williams, was published to critical acclaim in 2011. He also contributed the numerous biographical notes to Peter Barber’s hugely successful “London : A History in Maps”, co-published by the British Library and the London Topographical Society in 2012.
View all posts by Laurence Worms - Ash Rare Books →
This entry was posted in Book Collecting, Dust-Jackets, Forgotten Authors and tagged A. G. Street, Dust-jackets, Faber & Faber, Holdfast. Bookmark the permalink.