Bound For Her Birthday 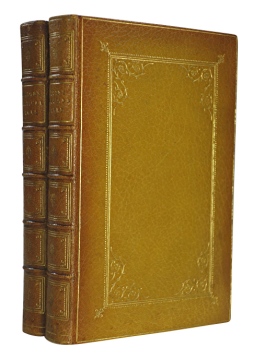 I’ve written about the bookseller Robert Bowes (1835-1919) before (you can read it all here on the blog for 26 December 2012).  An extraordinary life – born in rural poverty in Ayrshire, educated in the Cambridge bookshop of his uncles – the Alexander and Daniel Macmillan of publishing fame,  partnership in “Macmillan & Bowes”, an ascent to a matchless reputation as a scholar-bookseller, President of the ABA in 1914, and in the end an honorary degree from Cambridge University. 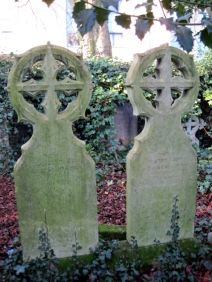 All well and good, but little there to touch on his private life, although I did note that on 15th April 1868 he married Fanny Brimley (1831-1903), daughter of Augustine Brimley, a Cambridge provision merchant, alderman, and sometime mayor of Cambridge, and half-sister to George Brimley (1819-1857), appointed librarian to Trinity College in 1845. And that they had three children, including George Edmund Brimley Bowes (1874-1946) – himself to become ABA President in 1923. And I can add now that both Robert and Fanny Bowes are buried at Mill Road Cemetery, where their matching headstones still stand — here they are in photographs borrowed (for the second post in a row) from the excellent Mill Road Cemetery website. 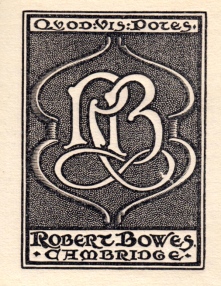 But knowing my weakness both for a nice binding and a book with a bloggable narrative, I was offered these two books last week by my friend and colleague Cooper Hay up in Glasgow (Cooper Hay Rare Books).  Picking up on a theme from my last post – books with a story attached, books belonging to a definable moment, books firmly located in time and place.

The books in themselves are of no great consequence, although pleasant and useful enough – standard editions of the poetical works of Milton and Scott, published in Macmillan’s “Globe Edition” format in 1877 and 1878 respectively. But not in the bindings one might ordinarily expect – for these were bound specially for Robert Bowes and for a special purpose – to give to his wife on her birthday in June 1883 (her fifty-second, as it happens). Presumably two of her favourite authors.

The Milton volume has his inscription to her with his initials – recording her birthday date of the 5th of June (today as I post this piece – Happy Birthday, Fanny).  A later inscription below, “In Memory of F. B. 28 February 1903” – the date of Fanny Bowes’ death – records the passing on of the books, by, or more probably to, “E. M.” – possibly Emma Maclehose – a niece of hers and a grand-daughter of Alexander Macmillan. It has also had bound in (bound in, rather than pasted in) Robert Bowes rather handsome “Quod Vis Potes” (What you wish, You can do) bookplate.

The bindings themselves only reveal their quality slowly. The spines fairly conventional, but the boards showing more truly the delicious colour of the morocco and the razor-sharp quality of the finishing. And then we look inside – hand-painted paste-downs – tulips for Milton, thistles for Scott. And then the slow reveal of the fore-edge paintings – the tulip and thistle designs continued on under the gilt and only exposed by fanning the leaves. Secret, subtle, and superb. 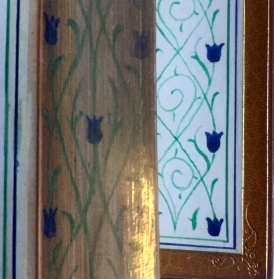 Infuriating not to know who executed these bindings, but there are no clues at all (as probably there shouldn’t be on a birthday-present).  Cooper is of the view that the bindings were probably done in-house by binders working for Macmillan.  I’m not at all sure of that – the more I look at them, the more I see top quality workmanship.  If bound in Cambridge, then John Bird Hawes of my last post would be a possibility – but there were other bookbinders in Cambridge and there would be no reason at all why Bowes, who had formerly worked in London, could not have commissioned them from a top London bindery.

I suspect in fact that they are the work of a younger man than Hawes – the designs are so up to the minute – that period of evolution in fashion and taste slowly building towards the full flowering of art nouveau of the 1890s. But whoever made them, wherever they were fashioned, I had to agree with Cooper as we negotiated a price – neither of us had ever seen anything quite like them before.

Laurence Worms has owned and run Ash Rare Books since 1971. He represented the antiquarian book trade on the (British) National Book Committee from 1993 to 2002 and has been six times an elected member of the Council of the Antiquarian Booksellers’ Association. He was largely responsible for drafting the Association’s Code of Good Practice first introduced in 1997 (and its recent update), served as Honorary Secretary of the Association from 1998 to 2001 and as President from 2011 to 2013. He is a former member of the Council of the Bibliographical Society and continues to serve on the Council of the London Topographical Society. He writes and lectures on various aspects of the history of the book and map trades, and has lectured at the universities of Cambridge, London, Reading and Sheffield, as well as at the Bibliographical Society, the Royal Geographical Society, the Warburg Institute, the National Library of Scotland and at Gresham College and Stationers' Hall. Published work includes the compilation of fourteen ‘lives’ for the “Oxford Dictionary of National Biography”, a number of articles for “The Oxford Companion to the Book” and the chapter on early English maps and atlases for the fourth volume of “The Cambridge History of the Book in Britain”. Essays on the British map trade are also appearing in “The History of Cartography” published by the University of Chicago Press. His long-awaited “British Map Engravers”, co-written with Ashley Baynton-Williams, was published to critical acclaim in 2011. He also contributed the numerous biographical notes to Peter Barber’s hugely successful “London : A History in Maps”, co-published by the British Library and the London Topographical Society in 2012.
View all posts by Laurence Worms - Ash Rare Books →
This entry was posted in ABA Past Presidents, Book Collecting, Bookbinders, Booksellers and tagged Bindings, Book collecting, Bookbinding, Cooper Hay, Fanny Bowes, Fore-edge Painting, Robert Bowes. Bookmark the permalink.