The booksellers of Bristol overcome with shyness – the carefully laid bait has not worked. No sightings to report. 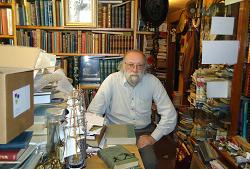 Stuck in heavy traffic all the way to Weston-super-Mare, but there found David Nesbit barricaded in behind walls of books at Sterling Books. A real servant of the community – books for all at reasonable prices. Taking in repairs, not just of books as we might expect, but clocks, model ships and anything else his customers care to bring in. Forty-seven years a bookseller and still going strong. Every town should have a shop like this.

The town council should be begging, praying and paying him to be here – not fleecing him for business rates.

Staying here the night. Sea-views from our sunny room on the front. Retsina already on ice at the local Greek restaurant. Over and out for the week.

Laurence Worms has owned and run Ash Rare Books since 1971. He represented the antiquarian book trade on the (British) National Book Committee from 1993 to 2002 and has been six times an elected member of the Council of the Antiquarian Booksellers’ Association. He was largely responsible for drafting the Association’s Code of Good Practice first introduced in 1997 (and its recent update), served as Honorary Secretary of the Association from 1998 to 2001 and as President from 2011 to 2013. He is a former member of the Council of the Bibliographical Society and continues to serve on the Council of the London Topographical Society. He writes and lectures on various aspects of the history of the book and map trades, and has lectured at the universities of Cambridge, London, Reading and Sheffield, as well as at the Bibliographical Society, the Royal Geographical Society, the Warburg Institute, the National Library of Scotland and at Gresham College and Stationers' Hall. Published work includes the compilation of fourteen ‘lives’ for the “Oxford Dictionary of National Biography”, a number of articles for “The Oxford Companion to the Book” and the chapter on early English maps and atlases for the fourth volume of “The Cambridge History of the Book in Britain”. Essays on the British map trade are also appearing in “The History of Cartography” published by the University of Chicago Press. His long-awaited “British Map Engravers”, co-written with Ashley Baynton-Williams, was published to critical acclaim in 2011. He also contributed the numerous biographical notes to Peter Barber’s hugely successful “London : A History in Maps”, co-published by the British Library and the London Topographical Society in 2012.
View all posts by Laurence Worms - Ash Rare Books →
This entry was posted in Booksellers, Bookshops and tagged Bookselling, Weston-super-Mare. Bookmark the permalink.