The mud was back on the stairs again this morning. Being cleared away by two cheery ladies who appeared to think everything was normal. But it’s not. It’s really not. I still haven’t seen another resident – although I have heard voices. And my soap was missing this morning. Try shaving without. It’s not room 101 – but it is room 202 (honestly). 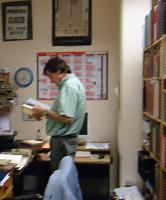 Roger in his Office

But back to the point. Booksellers, bookshops. Slight friction between Roger and Jane, but barring an unfortunate incident at Llandudno Junction trying to obtain a ticket for the car-park – an episode that took half an hour, involved two lifts, eight longish flights of stairs, three conversations, deliberate misdirection – if the lift doesn’t go anywhere, why claim it does? and what’s it for? – the expenditure of £3.20 and a telephone call, it was a pretty good day.  Roger and I set our course westwards to the principality and arrived at Madoc Books in Llandudno virtually without incident (the car-park came later). 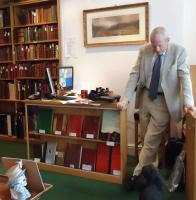 Paddy pleased to see us, a handsome shop, very impressive stock – especially of Welsh material and private press. Highly creditable all round. We both managed to find something to buy. I popped along the road to

Siop Lyfrau Lewis a few doors away. Roger declined. And then off again.

Llandudno Junction. Right on the roundabout (use the Asda car-park, not the railway station unless you are interested in surreal experiences – I know this now) – the present whereabouts of the legendary Gerry and Glenda Mosdell. The Junction Bookshop. Retired, my eye. The old Post Office turned into an immaculate little bookshop. Spick and span, neat and tidy, nothing pretentious – simply attractive, interesting and readable books at sensible prices. And how important has Gerry been to our trade? One of the founding fathers of the PBFA. Reflect on that. His thoughts now – time we went back to one association. Roger looking a little peaky at this turn in the conversation. Made our excuses – but both with a bag of books and delighted to have found them and renewed old ties.

Rumour had it that Colwyn Bay could still boast three second-hand bookshops. How many towns can claim that? We found two – the Bay Bookshop open, welcoming, and perfect for holiday town reading. The second closes at 3.30pm, but certainly exists. As does the third, but a monsoon blew up out of nowhere and confined us to the tea-shop.

Back to Macclesfield for a quiet Thai supper (excellent) and plans for the morrow.

Laurence Worms has owned and run Ash Rare Books since 1971. He represented the antiquarian book trade on the (British) National Book Committee from 1993 to 2002 and has been six times an elected member of the Council of the Antiquarian Booksellers’ Association. He was largely responsible for drafting the Association’s Code of Good Practice first introduced in 1997 (and its recent update), served as Honorary Secretary of the Association from 1998 to 2001 and as President from 2011 to 2013. He is a former member of the Council of the Bibliographical Society and continues to serve on the Council of the London Topographical Society. He writes and lectures on various aspects of the history of the book and map trades, and has lectured at the universities of Cambridge, London, Reading and Sheffield, as well as at the Bibliographical Society, the Royal Geographical Society, the Warburg Institute, the National Library of Scotland and at Gresham College and Stationers' Hall. Published work includes the compilation of fourteen ‘lives’ for the “Oxford Dictionary of National Biography”, a number of articles for “The Oxford Companion to the Book” and the chapter on early English maps and atlases for the fourth volume of “The Cambridge History of the Book in Britain”. Essays on the British map trade are also appearing in “The History of Cartography” published by the University of Chicago Press. His long-awaited “British Map Engravers”, co-written with Ashley Baynton-Williams, was published to critical acclaim in 2011. He also contributed the numerous biographical notes to Peter Barber’s hugely successful “London : A History in Maps”, co-published by the British Library and the London Topographical Society in 2012.
View all posts by Laurence Worms - Ash Rare Books →
This entry was posted in Booksellers, Bookshops, Hotels and tagged Colwyn Bay, Gerry and Glenda Mosdell (The Junction Bookshop), Llandudno, Llandudno Junction, Macclesfield, Madoc Books. Bookmark the permalink.