An Island of Civilisation

“An island of civilisation” – the words used by the celebrated 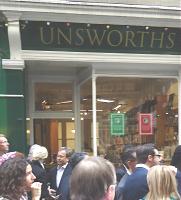 The throng outside Tim Bryars’ shop

And how accurate a description that is of this beloved byway of bookshops in the heart of London. A miraculous survival – one of London’s greatest treasures – and the home of course to the greatest concentration of ABA members to be found anywhere in the country. A tribute to some enlightened landlordism – the understanding that it’s as easy to make an area as it is to break it.

Simon Callow was there to unveil a plaque to commemorate Mozart’s earliest residence in London – here in Cecil Court – in the spring and summer of 1764.

Callow of course played Mozart in the original stage production of Peter Shaffer’s Amadeus. No-one more appropriate to perform the task. He also directed The Magic Flute for Opera Holland Park back in 2008 – so no surprise that some of the Holland Park team were there to sing for us, accompanied by a string quartet

(City of London Sinfonia) playing on the very spot where the boy prodigy once lived and, most likely, composed his first symphonies.

No surprise (again) that after an actorly introduction by David Drummond, Simon Callow made an excellent speech.  Tough act to follow, but our own Tim Bryars stepped forward to supply the background story – equally excellent. For all the hundreds of books about Mozart (almost all of which appeared to be in Travis & Emery’s eye-popping window display),

no-one had previouly known exactly where in the Court Mozart and his family had stayed. It was Tim’s own

adroit research in the eighteenth-century rate-books, cross-referenced of course by the study of contemporary maps of London, which supplied the answer and made the accurate placement of a plaque a possibility.

And – naturally enough – it was Tim’s drive and determination which brought it into being. This was very much his day. A good turnout, quite a crowd, we stand and applaud.

A thoroughly delightful afternoon – in fact one

of the most enjoyable afternoons I can ever recall – thank you so much Tim.

Good to see a number of friends and colleagues there.

Wonderful food and drink. Divine music in the open air. We all managed to have a chat, were charmed by the stunning soloists who stayed to talk, and simply didn’t want it to come to an end.

And – just for the record – I managed to take some photographs of a few of the shops which make the Court such a spellbinding and rewarding place to visit – music or otherwise. 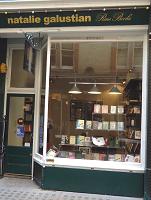 Laurence Worms has owned and run Ash Rare Books since 1971. He represented the antiquarian book trade on the (British) National Book Committee from 1993 to 2002 and has been six times an elected member of the Council of the Antiquarian Booksellers’ Association. He was largely responsible for drafting the Association’s Code of Good Practice first introduced in 1997 (and its recent update), served as Honorary Secretary of the Association from 1998 to 2001 and as President from 2011 to 2013. He is a former member of the Council of the Bibliographical Society and continues to serve on the Council of the London Topographical Society. He writes and lectures on various aspects of the history of the book and map trades, and has lectured at the universities of Cambridge, London, Reading and Sheffield, as well as at the Bibliographical Society, the Royal Geographical Society, the Warburg Institute, the National Library of Scotland and at Gresham College and Stationers' Hall. Published work includes the compilation of fourteen ‘lives’ for the “Oxford Dictionary of National Biography”, a number of articles for “The Oxford Companion to the Book” and the chapter on early English maps and atlases for the fourth volume of “The Cambridge History of the Book in Britain”. Essays on the British map trade are also appearing in “The History of Cartography” published by the University of Chicago Press. His long-awaited “British Map Engravers”, co-written with Ashley Baynton-Williams, was published to critical acclaim in 2011. He also contributed the numerous biographical notes to Peter Barber’s hugely successful “London : A History in Maps”, co-published by the British Library and the London Topographical Society in 2012.
View all posts by Laurence Worms - Ash Rare Books →
This entry was posted in ABA, Booksellers, Bookshops and tagged Angus O'Neill (Omega Bookshop), Anna Patalong, Cecil Court, Charlie Unsworth (Unsworth's Booksellers), Hannah Pedley, Nigel Garwood and Rainer Voigt, Simon Callow, Tim Bryars, Travis & Emery. Bookmark the permalink.