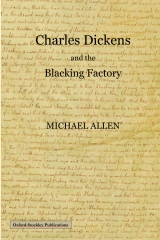 Charles Dickens and the Blacking Factory

A little tangential this – but with books and their histories in our hands there are safaris in time as well as space. That’s what we booksellers do.

Some of you will perhaps remember a whimsical, tongue-in-cheek, piece I wrote some years ago for the ABA Newsletter recounting my distant (and not entirely creditable) family connection with Charles Dickens. We all know that Dickens’ wicked relatives stuffed him into a blacking factory at a tender age – and I was compelled to admit that the Worms family were not entirely innocent in this.

In fact I had not realised how fully culpable we were. The Dickens scholar, Michael Allen, whose Charles Dickens’ Childhood  appeared in 1988, has returned with a new book, Charles Dickens and the Blacking Factory, just published by Oxford-Stockley Publications/Createspace (£24.95). Based on all sorts of new research and in particular a long and complex contemporary court case, we now know a great deal more. The Worms family were, for a time, full partners in the blacking business.

Let me simply quote the publishers – “Allen’s account opens up the world of Warren’s Blacking, taking us beyond the knowledge and understanding of a young child.  But more than that, Allen uncovers a great deal of new information, peeling away layers about Lamerte, the man who first offered Charley the job at the blacking factory, Lamerte’s family background, its Jewish roots, his Jewish cousins in the Worms family, Henry Worms – a likely model for Fagin, sent to Australia for handling stolen goods.  Here we have, for the first time, an accurate history of Warren’s Blacking, written down within two years of Dickens working there.  Allen puts before us, from a contemporary source, what really went on in a blacking factory.  Here is a feast of new material.  For anybody who thought they knew the full story of Dickens’ childhood, think again”.

Responding formally on behalf of the wicked relatives, I still maintain that it was all for little Charley’s own good – a combination of nineteenth-century tough love and the opportunity to join a potentially vastly profitable family business. He might have been more grateful – and in any case he would never have become one of our greatest novelists without this formative experience.  And I still have a few lingering doubts about the guilt of Henry Worms (at least in relation to the charge for which he was transported) – the petition for clemency signed by all his neighbours still lies unanswered in the National Archives. But now we have the full story – and you can judge for yourselves.

By coincidence, I’m flying to Henry Worms’ native Frankfurt early on Thursday for a meeting of the presidents of the International League of Antiquarian Booksellers (ILAB) in Weimar.  So there will be no more posts until after I return on Sunday. More on all that next week.

Laurence Worms has owned and run Ash Rare Books since 1971. He represented the antiquarian book trade on the (British) National Book Committee from 1993 to 2002 and has been six times an elected member of the Council of the Antiquarian Booksellers’ Association. He was largely responsible for drafting the Association’s Code of Good Practice first introduced in 1997 (and its recent update), served as Honorary Secretary of the Association from 1998 to 2001 and as President from 2011 to 2013. He is a former member of the Council of the Bibliographical Society and continues to serve on the Council of the London Topographical Society. He writes and lectures on various aspects of the history of the book and map trades, and has lectured at the universities of Cambridge, London, Reading and Sheffield, as well as at the Bibliographical Society, the Royal Geographical Society, the Warburg Institute, the National Library of Scotland and at Gresham College and Stationers' Hall. He teaches annually at the London Rare Book School, University of London. Published work includes the compilation of fourteen ‘lives’ for the “Oxford Dictionary of National Biography”, a number of articles for “The Oxford Companion to the Book” and the chapter on early English maps and atlases for the fourth volume of “The Cambridge History of the Book in Britain”. Essays on the British map trade are also appearing in “The History of Cartography” published by the University of Chicago Press. His long-awaited “British Map Engravers”, co-written with Ashley Baynton-Williams, was published to critical acclaim in 2011. He also contributed the numerous biographical notes to Peter Barber’s hugely successful “London : A History in Maps”, co-published by the British Library and the London Topographical Society in 2012.
View all posts by Laurence Worms - Ash Rare Books →
This entry was posted in Worms Family and tagged Charles Dickens, Henry Worms. Bookmark the permalink.

1 Response to The Blacking Factory