Yet not so fair yesterday – with some of the heaviest rainfall ever recorded, flooding, traffic chaos, and a state of emergency declared.  Our taxi back to the airport through almost the worst of it at times resembled more of a speedboat ride than a car journey.

Only one thing could ameliorate any of this, but we found it – and found it in plenty.  Some legendary Irish hospitality.  A warm welcome at our first port of call – David Cunningham at Cathach Books in Duke Street.   A lovely stock – especially of Irish literature, full of interest and rarity. And how splendid that a serious shop like this can survive just off Dublin’s main shopping street – and that 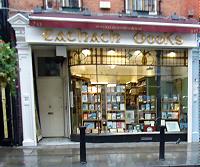 despite all we hear of the Irish economy, there were no obvious signs of retail doom.  Very few empty shops – and Grafton Street in full swing despite the weather, which was just beginning to turn ominous.

Next to the charming Stephen Stokes in the George’s Street

Arcade  – yet more attractive books and strains of Miles Davis from the adjacent music-shop.  We are enjoying ourselves. (Time you joined the ABA, Stephen?)  And then a cab out to Blackrock to the house of books of Éamonn and Vivien De Búrca.  “To be sure, he’s a famous man in Ireland” confided our cab-driver with genial satisfaction when told our destination.  Royally entertained to a fine 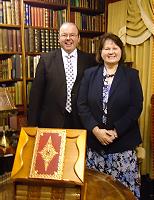 The rain by now lashing down, but on to the main business of the day.  Membership Secretary Roger Treglown and I are in Dublin to present the ABA’s seldom-presented Fifty Years a Bookseller badge to James Fenning (it’s actually fifty-three years, Jim tells me privately).  Another house of books – a  carefully chosen and impressive stock – the finest Oliver Twist in cloth I have ever seen – two more three-deckers which I presently purchase – coffee and cake, and more book-talk, wry humour and  entertainment.  Jim’s grandfather had a bookshop right on the Liffey back in the days of the Great War (we see some photographs), his father too was a bookseller (as well as Ireland’s most famous amateur snooker player), and via a training that brought him through the inter-linked famous old Dawson’s, Frank Hammond and Deighton, Bell firms he

The Fennings at Home

returned to Dublin some forty years ago.  The pedigree shows.  Ours is sometimes a solitary occupation and Jim perhaps does not know, perhaps has never been aware of, the esteem and regard with which his peers regard his taste, discrimination and skill in cataloguing.  I try to express a little of this on behalf of us all – but make the presentation without trying to embarrass him too much.  A master of his trade.

A commemorative photograph or two.  A cab called for – it turns into our longest taxi journey ever.  But eventually safely home at the end of what has turned into a twenty-two hour day – but all well worth it.  A truly memorable day – thank you all in Dublin.  I shall return.

Laurence Worms has owned and run Ash Rare Books since 1971. He represented the antiquarian book trade on the (British) National Book Committee from 1993 to 2002 and has been six times an elected member of the Council of the Antiquarian Booksellers’ Association. He was largely responsible for drafting the Association’s Code of Good Practice first introduced in 1997 (and its recent update), served as Honorary Secretary of the Association from 1998 to 2001 and as President from 2011 to 2013. He is a former member of the Council of the Bibliographical Society and continues to serve on the Council of the London Topographical Society. He writes and lectures on various aspects of the history of the book and map trades, and has lectured at the universities of Cambridge, London, Reading and Sheffield, as well as at the Bibliographical Society, the Royal Geographical Society, the Warburg Institute, the National Library of Scotland and at Gresham College and Stationers' Hall. Published work includes the compilation of fourteen ‘lives’ for the “Oxford Dictionary of National Biography”, a number of articles for “The Oxford Companion to the Book” and the chapter on early English maps and atlases for the fourth volume of “The Cambridge History of the Book in Britain”. Essays on the British map trade are also appearing in “The History of Cartography” published by the University of Chicago Press. His long-awaited “British Map Engravers”, co-written with Ashley Baynton-Williams, was published to critical acclaim in 2011. He also contributed the numerous biographical notes to Peter Barber’s hugely successful “London : A History in Maps”, co-published by the British Library and the London Topographical Society in 2012.
View all posts by Laurence Worms - Ash Rare Books →
This entry was posted in Book Collecting, Booksellers, Bookshops and tagged Dublin, Grafton Street, Ireland. Bookmark the permalink.