The Whole Art of Dress

I want The Whole Art of Dress

I saw it again just the other day in the Spectator Book Blog – “shabby second hand book dealers”. What is this?  Why are booksellers almost invariably described as shabby?   Even Hugh Grant was referred to as “yes, the shabby bookseller might win the most beautiful movie star in the world” in a review of Notting Hill.   Sartorially challenged sometimes, perhaps – but shabby?   Really?  I’ve found no evidence at all of this on my travels – but then, as the First Lady says, I probably wouldn’t have noticed if I had.  (In truth, she hauled me into a shoe-shop at one point early in our travels and flatly refused to drive on until I had bought some new shoes).  No point in arguing – the world (and in particular, I suspect, the First Lady) has us down as shabby.  Let’s try to explain it.

No prima facie reason – booksellers can discourse for hours (i.e. bore you senseless) on the potential significance of the differences between a sand-grain and a fine-diaper grain cloth on a Victorian novel.  They can tell at a glance the

difference between bindings of pigskin or sealskin (although the latter is perhaps rather more common than cataloguers suppose).

They can date a book with extraordinary accuracy just from the fashion and style of its cover or jacket.  In other words, they spend their lives looking at and describing fabric, fashion and design.

So what goes wrong with the style, texture and condition of what they wear?

Various reasons suggest themselves.  The first is that a lifetime spent dealing in second-hand goods has completely dulled the sensibilities.  To judge from some high-flown and optimistic descriptions of condition on the internet, many booksellers can no longer tell the difference between new and second-hand.  A new book to them is one they have just bought.  And if it’s new it must be “fine”.  One word you conspicuously never see in a book description is the gloriously accurate and expressive “threadbare” – but isn’t that the perfect word to use of a cloth abraded and worn thin?  Some booksellers perhaps  also think that if books can survive in decent condition for hundreds of years,  then so will their clothes.  They generally come in time to have an aversion to buying anything new at all, to prefer things a little worn, a little lived-with, something with a history, provenance and few minor marks and spots.  (This may also account for the well-known penchant some booksellers have for freckled redheads – a weakness acutely pinpointed by Ronald Searle in his Slightly Foxed – but Still Desirable).

There is too what I call the valet delusion.  Too long and too deep an immersion in (according to taste) country-house mysteries or the novels of P. G. Wodehouse has undoubtedly led some of us to suppose that there is always an unseen hand at work to launder, press, brush, mend and otherwise maintain our wardrobes without our needing to ask or enquire, merely to expect and believe these things will have happened.

When it comes to fashion, I suppose we collectively struggle to keep up – and there is always the danger that we might be taking our advice from somewhat outmoded publications.  And we are slow to act and arbitrate.  Here is The Whole Art of Dress, published in 1830.  The ABA Standards Committee is, I understand,  still, to this day, debating whether the somewhat outré combination of an Hibernian stock and a Tilbury

titfer would constitute acceptable apparel at an ABA bookfair – a question first raised, I believe, by Mr Pickering in 1840.  But can we really blame ourselves too much for living in the past? – It is, after all, our job.

I didn’t in fact buy The Whole Art of Dress, however it may appear, in a belated attempt to move my image on into the nineteenth century.  I am of course notoriously eighteenth- rather than nineteenth-century in disposition and outlook – I still search in vain for a Whig candidate on ballot-papers.  An old flame (a prettily freckled redhead, as it happens) used to make out that she invariably dreamt of me wearing a powdered wig and a tricorn hat.  Yet again, an old friend, on discovering  me reading John Bowle’s Politics and Opinion in the Nineteenth Century, immediately exclaimed, “Steady on, guv’nor!  We don’t want you getting hold of any dangerous new-fangled ideas”. 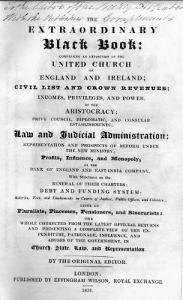 No, I bought the book – and this was probably why I was reading Bowle – because it was published by that great bookseller and great radical publisher, Effingham Wilson (1785-1868), a personal hero both for what he stood for and as a predecessor of mine as a bookseller at the Royal Exchange.  No respecter of those with outdated notions of privilege and entitlement, he was the formidably articulate champion of a free press – “It is like the air we breathe: if we have it not, we die”.  His obituary in the City Press claimed for him “the most independent, public-spirited, and fearless career, of any publisher of his time”, and so it was.  He published the notorious Church-of-Englandism (1818) and the allegedly “unpublishable” The Elements of the Art of Packing (1821), both by Jeremy Bentham.  He brought out Perronet Thompson’s attacks on the corn laws, the “revolting heresies” of William Godwin, and the social visions of Robert Owen.  His edition of John Wade’s The Extraordinary Black Book (1831), listing all the abuses, sinecures, placemen, pensioners and their emoluments, became known as the “reformers’ bible” and underpinned the passing of the Great Reform Act of 1832. Later he became closely involved with George Birkbeck and the free education movement, passionate that every child should “have that given to it which nobody can take away”.

Outside of politics, he was also the first commercial publisher of both Tennyson (Poems, Chiefly Lyrical, 1830) and Browning (Paracelsus, 1835), as well as the first cricketing classic—John Nyren’s The Young Cricketer’s Tutor (1833).  Not so shabby a career – and I’m proud to have penned a brief  life for the Oxford Dictionary of National Biography.  As to how he dressed, I am wholly unable to tell you – but I’m probably just about willing to part with the book for the price of a new suit.

Laurence Worms has owned and run Ash Rare Books since 1971. He represented the antiquarian book trade on the (British) National Book Committee from 1993 to 2002 and has been six times an elected member of the Council of the Antiquarian Booksellers’ Association. He was largely responsible for drafting the Association’s Code of Good Practice first introduced in 1997 (and its recent update), served as Honorary Secretary of the Association from 1998 to 2001 and as President from 2011 to 2013. He is a former member of the Council of the Bibliographical Society and continues to serve on the Council of the London Topographical Society. He writes and lectures on various aspects of the history of the book and map trades, and has lectured at the universities of Cambridge, London, Reading and Sheffield, as well as at the Bibliographical Society, the Royal Geographical Society, the Warburg Institute, the National Library of Scotland and at Gresham College and Stationers' Hall. Published work includes the compilation of fourteen ‘lives’ for the “Oxford Dictionary of National Biography”, a number of articles for “The Oxford Companion to the Book” and the chapter on early English maps and atlases for the fourth volume of “The Cambridge History of the Book in Britain”. Essays on the British map trade are also appearing in “The History of Cartography” published by the University of Chicago Press. His long-awaited “British Map Engravers”, co-written with Ashley Baynton-Williams, was published to critical acclaim in 2011. He also contributed the numerous biographical notes to Peter Barber’s hugely successful “London : A History in Maps”, co-published by the British Library and the London Topographical Society in 2012.
View all posts by Laurence Worms - Ash Rare Books →
This entry was posted in Fashion. Bookmark the permalink.

1 Response to The Whole Art of Dress