All work and no play.  Hardly true, this week at least – a seasonal round of partying, beginning with the ABA Christmas party last Wednesday, lunch with booksellers in the north on Friday,

Cocktails with Bompas and Parr

local festivities with friends on Saturday, and then last night – Cocktails with Natalie Galustian.  Her splendid shop in Cecil Court ablaze with light and filled with booksellers for the launch of a new book – Cocktails with Bompas and Parr.

Sam Bompas and Harry Parr were there in person.  Green and flowery cocktails were flowing and for once Natalie’s fine and idiosyncratic stock took second place to a display of the book of honour.  Terrific book – wonderful photographs – ideal Christmas gift at £14.99.

Always a pleasure to visit the shop of course – just look at some of the catalogues on her website: poker and gambling; cookery and cocktails; African American and Cuban literature; early gay fiction – offbeat, quirky and a wholly original mix of stock stylishly displayed.  I’ve obviously signed her up to give one of the ABA seminars next year. 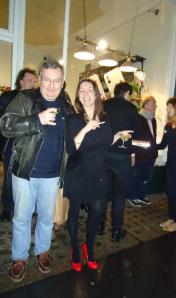 Some of the usual suspects also in evidence.  Angus O’Neill (Omega Bookshop), head of the ABA Management & Communications Committee – for the moment concentrating on the communications side (he somehow seemed to turn up in every photograph).   Glenn Mitchell from Peter Harrington was there.  Kenneth Fuller from Marchpane – and many another.  The trade in top form.  And Tim Bryars was there too, ABA Press Officer and something of an arbiter on matters cocktail (see his comment on Hijacked by Wild Swimmers back in August).

Tim’s always on the lookout to promote the book trade – don’t miss his Carols in the Court this coming Thursday.  A welcome back to Opera Holland Park – Thursday 15th December from 4.30pm.  As dusk draws on and Cecil Court is bathed in the warm glow of Victorian gas lamps, ten professional singers will perform traditional carols, with a few jazzier pieces and some other sacred music.  There will be wine, mince pies and other festive treats.   Don’t miss it!  Get there early and visit the bookshops too.

Laurence Worms has owned and run Ash Rare Books since 1971. He represented the antiquarian book trade on the (British) National Book Committee from 1993 to 2002 and has been six times an elected member of the Council of the Antiquarian Booksellers’ Association. He was largely responsible for drafting the Association’s Code of Good Practice first introduced in 1997 (and its recent update), served as Honorary Secretary of the Association from 1998 to 2001 and as President from 2011 to 2013. He is a former member of the Council of the Bibliographical Society and continues to serve on the Council of the London Topographical Society. He writes and lectures on various aspects of the history of the book and map trades, and has lectured at the universities of Cambridge, London, Reading and Sheffield, as well as at the Bibliographical Society, the Royal Geographical Society, the Warburg Institute, the National Library of Scotland and at Gresham College and Stationers' Hall. He teaches annually at the London Rare Book School, University of London. Published work includes the compilation of fourteen ‘lives’ for the “Oxford Dictionary of National Biography”, a number of articles for “The Oxford Companion to the Book” and the chapter on early English maps and atlases for the fourth volume of “The Cambridge History of the Book in Britain”. Essays on the British map trade are also appearing in “The History of Cartography” published by the University of Chicago Press. His long-awaited “British Map Engravers”, co-written with Ashley Baynton-Williams, was published to critical acclaim in 2011. He also contributed the numerous biographical notes to Peter Barber’s hugely successful “London : A History in Maps”, co-published by the British Library and the London Topographical Society in 2012.
View all posts by Laurence Worms - Ash Rare Books →
This entry was posted in Booksellers, Bookshops, Mapsellers and tagged Angus O'Neill (Omega Bookshop), Bompas & Parr, Cecil Court, Cocktails, Glenn Mitchell, Natalie Galustian, Peter Harrington, Tim Bryars. Bookmark the permalink.