The first person I met as I headed into the York National Book Fair was the legendary American bookman, David Bauman (Bauman Rare Books) – branches in Philadelphia, New York (Madison Avenue) and Las Vegas.  What a feather in the cap for the PBFA and the York Fair to have him not just visiting – but exhibiting too.   Impressive stuff.   A friendly greeting, a warm handshake, and the fair is all around us – Britain’s largest, Europe’s largest – aisle after aisle, floor after floor.

Stand One – here’s Jean Hedger, looking jolly and just lunched.  She asks why I’m wearing my pyjamas, did I have an early start?  I point out rather acidly that this a new shirt, a gift from Anne, and that just because it has a boldish stripe that doesn’t make it a pyjama top.  Stand Two – here’s Robert Frew.   Brief word with him and then I spy on the Bernard Quaritch stand none other than my Australian counterpart, Sally Burdon (Asia Bookroom), President of ANZAAB.

Sally’s back visiting old family haunts, both here and in her husband’s Ireland, before they head on to the ILAB Congress in Lucerne.  We discuss one or two of the matters to come up at the ILAB Presidents’ Meeting this weekend – and I look forward to seeing her again in Switzerland.

Burden) with a really rather attractive Saxton map.   And so it goes on – over 200 exhibitors, over fifty ABA members – I spoke to most of them – but don’t worry, I’m not going to list them all.  Another posse of ABA members on the next aisle, or two, or three – Jonkers Rare Books, Stephen Foster, Christopher Saunders, Bow Windows Bookshop, Paul Foster, Ian Marr, Elaine Beardsell (Toll House Books), Demetzy Books, Fine Books at Ilkley, Collectable Books, Nigel Traylen (Ventnor Rare Books) – hadn’t seen Nigel in quite a while.  Asked how he was enjoying the move from shop to working from home – and he looked happy enough and seemed refreshed by the change.

Happier still were Keith and Marina Fletcher (H. M. Fletcher)  – they had only just heard that they had become grandparents for the very first time.  Beaming broadly – congratulations to them – and welcome from us all in the rare book world to young Jacob Fletcher.  Enjoying the fair (obviously) – but itching to be on their way home.

Ran into three lovely ladies from the British Library – enjoying the fair, enjoying meeting the booksellers who find them the treasures.  On to congratulate Tony Fothergill (Ken Spelman) and Janette Ray on organising yet another outstanding fair here in York. It really has become a fair that no-one can afford to miss.

Always good to see Peter Miller (Ken Spelman) – claims he’s retired now, just a consultant – but he’s here, he’s not gone away, and frankly, I don’t think he can keep away.  Maggs Bros. aren’t exhibiting this year, but here’s Carl Williams having a look round – he tells me that he has been asked to do a reprise of his recent Senate House talk in our Book Collecting Seminars series at no less an institution than Harvard University – honoured, flattered and I know they’ll enjoy it as much as we did. 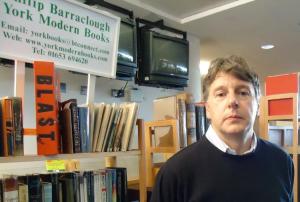 Joe McCann from Maggs is here too – but something’s gone wrong – so busy chatting, I haven’t bought a book yet.  Soon remedied with a most attractive signed and jacketed John Buchan from Stephen Dick (Holybourne Rare Books).  An album of Lakeland views by William Banks of Edinburgh – really must do that post about him I have been planning – from dear old Larry Hutchison.  Spend a cordial while comparing notes with by PBFA counterpart, George Newlands (McLaren Books) – he too has closed a shop to work from home.  But one thing I really must do without further delay is to head upstairs to seek out our newest member – Philip Barraclough (York Modern Books) – elected to the ABA just forty-eight hours earlier.  Congratulations and welcome, Philip.  And thank you too for the delightful association copy of Ted Hughes’ first book – I shall enjoy cataloguing that.

Back downstairs, turn a corner, and run into my old colleague and assistant Steve Dickson (Adam & Eve Books).  Delightful man.  No-one more pleasant or more at ease with the customers.  He used to have the World’s End Bookshop before Giles Lyon took it over – he’s here too somewhere I think.  We catch up a bit and agree to have a drink together later in the year.

About done for the day – time to seek out my hotel.  A quiet and not over bibulous dinner with my old friend Roger Treglown.  Roger’s long been a vegetarian, but has now given up dairy as well – and I must admit he is looking extremely well on it.  Somewhat miraculously, we find something non-meat and non-dairy to eat in an Italian restaurant – and off to bed for an early night.  Early start needed for Day Two at York tomorrow.

Laurence Worms has owned and run Ash Rare Books since 1971. He represented the antiquarian book trade on the (British) National Book Committee from 1993 to 2002 and has been six times an elected member of the Council of the Antiquarian Booksellers’ Association. He was largely responsible for drafting the Association’s Code of Good Practice first introduced in 1997 (and its recent update), served as Honorary Secretary of the Association from 1998 to 2001 and as President from 2011 to 2013. He is a former member of the Council of the Bibliographical Society and continues to serve on the Council of the London Topographical Society. He writes and lectures on various aspects of the history of the book and map trades, and has lectured at the universities of Cambridge, London, Reading and Sheffield, as well as at the Bibliographical Society, the Royal Geographical Society, the Warburg Institute, the National Library of Scotland and at Gresham College and Stationers' Hall. Published work includes the compilation of fourteen ‘lives’ for the “Oxford Dictionary of National Biography”, a number of articles for “The Oxford Companion to the Book” and the chapter on early English maps and atlases for the fourth volume of “The Cambridge History of the Book in Britain”. Essays on the British map trade are also appearing in “The History of Cartography” published by the University of Chicago Press. His long-awaited “British Map Engravers”, co-written with Ashley Baynton-Williams, was published to critical acclaim in 2011. He also contributed the numerous biographical notes to Peter Barber’s hugely successful “London : A History in Maps”, co-published by the British Library and the London Topographical Society in 2012.
View all posts by Laurence Worms - Ash Rare Books →
This entry was posted in Book Collecting, Book Fairs, Booksellers and tagged Bernard Quaritch, Book collecting, Chris Saunders, George Newlands, Ian Marr, Jean Hedger, Joe McCann, Keith and Marina Fletcher (H. M. Fletcher), Maggs Bros, Peter Miller (Ken Spelman), Philip Barraclough (York Modern Books), Philip Burden (Clive A. Burden), Sally Burdon (Asia Bookroom), Stephen Foster, York National Book Fair. Bookmark the permalink.