Too busy feasting across Europe to post about everything I’ve been up to in the last month or so – here’s a quick round-up of some of the things I’ve missed out.

The first Senate House Book-Collecting Seminar of the new academic year was given by the excellent Julian Browning (Julian Browning Autographs – link in the blogroll to the right).  It’s been a very good series all the way through, with some fine speakers – and Julian was right up there with the best of them.  Originally trained at Maggs Bros. – no better pedigree.  For forty years, Julian has dealt in letters, historical documents and autographs with style and verve – no-one better to talk about it.  Here is a man who says hurrah for eBay:  made for dealing in this type of material, it makes finding it easier and keeps prices reasonable and within bounds.  (The eBay downside has been very much brought to mind by the recent court conviction of an antiques dealer on multiple counts of fraud relating to hundreds of books with forged signatures – he said they were ‘signed’ but not ‘signed by’ – the jury wasn’t fooled.  Think very, very, carefully before dealing with anyone who doesn’t belong to a legitimate trade association – the ABA obviously, but also, in this case, Julian’s own association – PADA – the Professional Autograph Dealers Association). 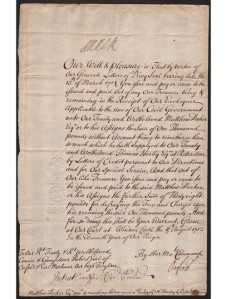 The power of the genuine signature is a very real one – a blazon of our identity, the unanswerable  power of a signature on a legal document, and also a token for posterity of the essence of a life.  This is why they are collected.  At a basic level these can be a species of holy relic – possession yielding some atavistic share in the glory.  But letters and documents are much more than this, they are fragments of history itself.  A letter is valued not on its rarity or condition, but its content and importance.  Collecting them is collecting knowledge and the stuff of history – and the market works on the principle that knowledge has a value, and that value becomes a price.  Part of its appeal to Julian is that it is a field of collecting remarkably free from academic snobbery.  Your letter, your document, yours to research.  It’s also largely free of collecting ‘rules’ – there are no bibliographies or bibles.  Areas of collecting are defined by the collectors, not the dealers.

Research is shaped by the material, not by edict or by any prior sense of what you should be looking for.  Add to this that even a significant collection can take up very little room – and we begin to see the attractions.  As Julian pointed out, the material is actually easier to find than ever, constraints on institutional budgets are leaving the field very much to the private collector – and keeping prices down.  I at least was wholly persuaded – and here are some images of items from Julian’s stock.  Thank you to him for a splendid and stimulating evening.

This month we look forward to Jolyon Hudson (Pickering & Chatto) talking about the financial nuts and bolts of the rare book trade – something I have always longed to understand.  Click on ‘Book Collecting Seminars’ in the blogroll for details.

An ABA Council meeting last week – mercifully a rather shorter one than I was expecting.  Minutes are being prepared, but the main things were that we finally agreed to introduce a new tier of Associate Membership.  Let’s be clear on that, this is not about lowering standards – it’s about helping booksellers to achieve those standards right from the outset of their career.  Link in the blogroll once more.  Also agreed was that, unless an electoral challenge is forthcoming, Brian Lake (Jarndyce) will take over as president when I step down next April, with Michael (Oscar) Graves-Johnston stepping up to vice-president.

Spent part of Tuesday afternoon helping out the judges in the Designer Bookbinders annual bookbinding competition – although in the end I don’t think my contribution helped at all this year.  But just to show I sometimes do better, here’s a picture of a binding I commissioned from Kate Holland a few years ago – it won both the Mansfield Medal for the Best Book in Competition and the First Prize Open Choice Book back in 2006 – and still sits very happily on my shelves.  Ran into Ed Maggs (Maggs Bros.) and Julian Rota (Bertram Rota Ltd.) there – both of them proving rather more decisive in their choices – Ed judging the Maggs annual prize and Julian the ABA certificates.  Always a pleasant afternoon. 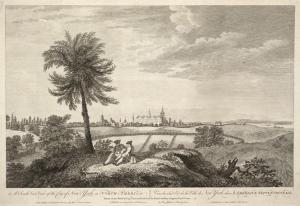 New York in 1785 – from the King George III Topographical Collection. Courtesy of the British Library.

Wednesday morning and a visit to the British Library to talk about a new project to catalogue, conserve and digitise the extraordinary and wonderful King George III Topograpical Collection – (K. Top. as aficionados know it from the shelfmarks) – thousands and thousands of largely unplumbed and unresearched maps and images, many of them unique.  I suppose the highlight of the discussion in a way was my exact contemporary, Peter Barber, Head of Map Collections at the BL (see London : A History in Maps below), and I chatting away about crowdsourcing the cataloguing, blogging and tweeting as if these were concepts familiar to us from earliest childhood – which so, so, plainly they are not.  But it’s a well worthwhile project, needs lots of money to make it happen, and obviously the ABA will help publicise it as best we can.

And between all of these things I did a little bit of research on an obscure but rather fine Victorian engraver previously known only as G. B. Smith.  I can now reveal him as George Belles Smith (1820-1875), and will probably put up a post about him before too long.  And I catalogued at least one book – and sold a few more.

And now here we are on the eve of the Chelsea Book Fair – can it be November already?  I wrote about it last year (see Fireworks below)  and will do so again – better than ever this year I am promised and I am sure it will be – check the Chelsea Book Fair website for times, highlights, details of guided tours and special features, etc.  Can’t wait to get there.

Laurence Worms has owned and run Ash Rare Books since 1971. He represented the antiquarian book trade on the (British) National Book Committee from 1993 to 2002 and has been six times an elected member of the Council of the Antiquarian Booksellers’ Association. He was largely responsible for drafting the Association’s Code of Good Practice first introduced in 1997 (and its recent update), served as Honorary Secretary of the Association from 1998 to 2001 and as President from 2011 to 2013. He is a former member of the Council of the Bibliographical Society and continues to serve on the Council of the London Topographical Society. He writes and lectures on various aspects of the history of the book and map trades, and has lectured at the universities of Cambridge, London, Reading and Sheffield, as well as at the Bibliographical Society, the Royal Geographical Society, the Warburg Institute, the National Library of Scotland and at Gresham College and Stationers' Hall. He teaches annually at the London Rare Book School, University of London. Published work includes the compilation of fourteen ‘lives’ for the “Oxford Dictionary of National Biography”, a number of articles for “The Oxford Companion to the Book” and the chapter on early English maps and atlases for the fourth volume of “The Cambridge History of the Book in Britain”. Essays on the British map trade are also appearing in “The History of Cartography” published by the University of Chicago Press. His long-awaited “British Map Engravers”, co-written with Ashley Baynton-Williams, was published to critical acclaim in 2011. He also contributed the numerous biographical notes to Peter Barber’s hugely successful “London : A History in Maps”, co-published by the British Library and the London Topographical Society in 2012.
View all posts by Laurence Worms - Ash Rare Books →
This entry was posted in Book Collecting and tagged Autograph Letters, British Library, Julian Browning, Maggs Bros, Seminars on Book Collecting. Bookmark the permalink.