Just away to the Edinburgh Book Fair – looking forward to seeing lots of friends there – both old and new.  A full report on that next week.  In the meantime, another past president of the ABA – with many thanks to Ed Bayntun-Coward (George Bayntun) for additional information and a couple of the pictures. 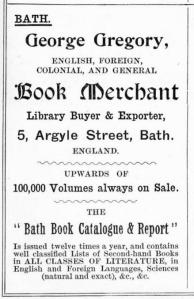 George Edward Gregory (1852-1930) of Bath was president of what was then known as the International Association of  Antiquarian Booksellers through the difficult years of the Great War between 1915 and 1918.  He was born at Bath in 1852, the son of William Gregory, himself born and bred in Bath, and his wife Margaret, who came from Cardiganshire.  William Gregory was a master bookbinder, then living at 14 York Street and employing two men.

By 1871, the family now living at 11 Prior Park Cottages, George Gregory was himself a bookbinder.  In 1878 he married Isabel Marriott Clement, a pianist who had once lodged with another Bath bookbinder, John Maggs.  The couple set up house at 1 Upper East Hayes Terrace, Walcot – their first and only child being born the following year.  The 1881 Census entertainingly lists the occupation of two-year-old George Bernard Gregory as “little beggar”. 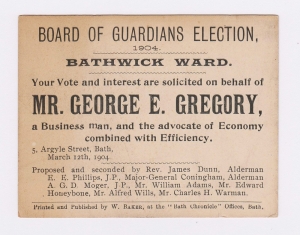 Gregory had widened the family business to include bookselling as well as bookbinding, and by 1888 or earlier he was in occupation of what were to become well-known premises at 5 Argyle Street, on the corner of Grove Street – the family living above the shop.  In an 1894 advertisement he styled himself as an “English, Foreign, Colonial and General Book Merchant, Library Buyer and Exporter”, issuing monthly catalogues, and  with “upwards of 100,000 volumes always on sale”.  Active in local politics, he sought election to the Bath Board of Guardians in 1904 as “the advocate of economy combined with efficiency”. 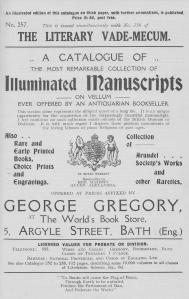 The 1911 Census recorded him, still at Argyle Street, as a “bookseller (rare and antiquarian) by appointment to Queen Alexandra” and by now he was also issuing catalogues of prints.  At about this time he also offered for sale his own extraordinary collection of illuminated manuscripts – “the diligent quest of a long life” – a collection he believed unmatched outside the British Museum and the Bodleian, and certainly the most remarkable collection ever offered by an antiquarian bookseller.

He remained at Argyle Street, still selling books and styling the shop “the world’s book store”, until 1923.  His son had died quite young and the business, complete with a stock of books filling twenty-three rooms, was sold to George Bayntun in 1924.  Gregory’s wife of over fifty years died in May 1930 and he did not long survive her, dying at the Forbes Fraser Hospital near Bath on the 1st August in the same year.

Laurence Worms has owned and run Ash Rare Books since 1971. He represented the antiquarian book trade on the (British) National Book Committee from 1993 to 2002 and has been six times an elected member of the Council of the Antiquarian Booksellers’ Association. He was largely responsible for drafting the Association’s Code of Good Practice first introduced in 1997 (and its recent update), served as Honorary Secretary of the Association from 1998 to 2001 and as President from 2011 to 2013. He is a former member of the Council of the Bibliographical Society and continues to serve on the Council of the London Topographical Society. He writes and lectures on various aspects of the history of the book and map trades, and has lectured at the universities of Cambridge, London, Reading and Sheffield, as well as at the Bibliographical Society, the Royal Geographical Society, the Warburg Institute, the National Library of Scotland and at Gresham College and Stationers' Hall. Published work includes the compilation of fourteen ‘lives’ for the “Oxford Dictionary of National Biography”, a number of articles for “The Oxford Companion to the Book” and the chapter on early English maps and atlases for the fourth volume of “The Cambridge History of the Book in Britain”. Essays on the British map trade are also appearing in “The History of Cartography” published by the University of Chicago Press. His long-awaited “British Map Engravers”, co-written with Ashley Baynton-Williams, was published to critical acclaim in 2011. He also contributed the numerous biographical notes to Peter Barber’s hugely successful “London : A History in Maps”, co-published by the British Library and the London Topographical Society in 2012.
View all posts by Laurence Worms - Ash Rare Books →
This entry was posted in Booksellers and tagged Bath, Bookselling, George Bayntun. Bookmark the permalink.