I don’t want to go on about the tramworks in Edinburgh – but haven’t they being going on a bit long themselves? 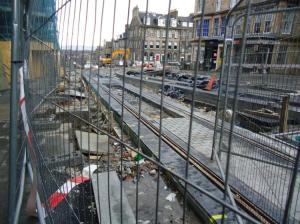 Even pedestrians are having to pilot their way through this sort of thing now.  But never mind – we are here to enjoy ourselves, we are here to be positive, we are here to do some business – and once I’d found a way round all this I checked into my hotel.  One or two what we call ‘Alex Polizzi moments’ there, but no First Lady to please on this trip and I’m happy enough with a bed for the night in a frozen city.

Down to the Radisson Blu Hotel to see if the boxes of books have made it up here in the Jarndyce van.  A long drive up for Brian Lake and Carol Murphy, but very good of them to do it and it rolls into the car-park right on cue.  With the willing help of young Donovan Rees and Katherine Thorn (Bernard Quaritch Ltd.), whose boxes were also in the van, we are soon unloaded – shelves set up and ready for the morrow.   Time to stroll across to McNaughtan’s Bookshop – uncannily tidy these days – and a glass or two with Elizabeth Strong, as we view her rather splendid small exhibition of twentieth-century wood engravings.

Something that might almost be called a queue as we wait to kick off the fair at lunchtime the next day.  Quite a crowd in to begin with.  Some healthy sales round the room.  Rather impressed by the man from the National Library of Scotland who consults their catalogue on his mobile phone and then briskly says things like – “No, we don’t have this – I’ll take it”.  (Well, he didn’t actually say that to me – but he did to a couple of people within earshot).  Also rather impressed when Cooper Hay across the aisle starts asking for more sold stickers as he’s run out – I’ve yet to discover that mine have been printed and the wrong paper and don’t either stick or unstick.  But things begin to pick up – a book sold here, a book sold there.  Then quite a decent sale of a book that’s been hanging around.  Across the room we clock up £40,000 in sales between twenty of us.  And good business too downstairs in the PBFA room, where I’d found a book or two – these already sold and the cost of doing the fair largely recouped.  Purchases upstairs from my ABA neighbours as well – an absolutely  delightful Fin de Siècle novel with an Aubrey Beardsley frontispiece (from Charles Cox, come here all the way from darkest Cornwall), by a mysterious author whom I think I may be able to unveil here next week after a century of doubt.

Good things too over the two days from Steve Liddle, Alan Grant (Grant & Shaw Ltd.), Anthony Smithson (Keel Row Bookshop), Elizabeth Strong (McNaughtan’s Bookshop) – and a couple of attractive London maps as well from Janette Ray.  The second day of the fair noticeably more quiet – but not only is it freezing outside but the streets are thronging with strange people wearing  daffodil-hats and carrying inflatable sheep – yes, the Welsh are in town for the rugby.   Not a great day for sales, but a steady trickle and the combined take heads up to well over £50,000 (average £2,587). The PBFA Fair downstairs added another £30,000 to that – and I’m happy to find that, despite the purchases, the eight boxes which came north have reduced to seven for the return journey.

And of course we are not only here to trade – it’s very much about sociability and comradeship as well.  One lively night out led by Alan Grant and Kirsty – quick visit to the Oxford – the Welsh rugby supporters on the next table frankly incredulous that anyone would be in town for anything other than the match – and more disbelieving still that anyone could possibly make a living out of selling old books.  A concept which truly shocked them (must check on how many members we have in Wales).  About a dozen of us on to a fine fish supper – actually it was rather grander than that – fish cuisine.

And a superb meal the following night, courtesy of John and Sandy Critchley.  Sweeping views across Edinburgh from the top floor.  Excellent company, with David Steedman and Elizabeth Strong, and some fine and inventive cooking at Harvey Nichols.  (Butter served on large pebbles from the beach, that sort of thing).  Interesting, unusual and definitely a cut above the normal fare.  My thanks to them all.

I’m speaking to my lawyers about the miserable rail journey home.  I hope Ian Marr, whom I ran into at the station, fared better.  He is another who’d come up all the away from Cornwall – there’s really no excuse for the rest of you not being there.  But none of it really detracted.  A thoroughly enjoyable few days.  It’s a good fair – always the most sociable fair – long may it prosper.

Laurence Worms has owned and run Ash Rare Books since 1971. He represented the antiquarian book trade on the (British) National Book Committee from 1993 to 2002 and has been six times an elected member of the Council of the Antiquarian Booksellers’ Association. He was largely responsible for drafting the Association’s Code of Good Practice first introduced in 1997 (and its recent update), served as Honorary Secretary of the Association from 1998 to 2001 and as President from 2011 to 2013. He is a former member of the Council of the Bibliographical Society and continues to serve on the Council of the London Topographical Society. He writes and lectures on various aspects of the history of the book and map trades, and has lectured at the universities of Cambridge, London, Reading and Sheffield, as well as at the Bibliographical Society, the Royal Geographical Society, the Warburg Institute, the National Library of Scotland and at Gresham College and Stationers' Hall. Published work includes the compilation of fourteen ‘lives’ for the “Oxford Dictionary of National Biography”, a number of articles for “The Oxford Companion to the Book” and the chapter on early English maps and atlases for the fourth volume of “The Cambridge History of the Book in Britain”. Essays on the British map trade are also appearing in “The History of Cartography” published by the University of Chicago Press. His long-awaited “British Map Engravers”, co-written with Ashley Baynton-Williams, was published to critical acclaim in 2011. He also contributed the numerous biographical notes to Peter Barber’s hugely successful “London : A History in Maps”, co-published by the British Library and the London Topographical Society in 2012.
View all posts by Laurence Worms - Ash Rare Books →
This entry was posted in Book Fairs, Booksellers and tagged Bookfairs, Edinburgh. Bookmark the permalink.