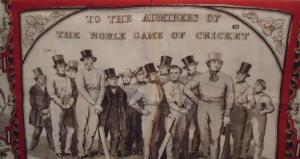 “Having a day off?”, enquired Jonathan Potter, going on to add that now I worked from home he supposed every day was a day off.  I take his point, but that’s not quite how I see it: the sad and dismal truth is that if you work from home then every day is a day at work.  But there’s work and there is work.  What I was actually doing swanning around his admirable map-gallery on George Street (just off Baker Street) and thoroughly enjoying myself was attending the launch of a special exhibition put on by his brother, Nick Potter, in partnership with Michael Down of Boundary Books.  Nick has been dealing in sporting art and memorabilia for thirty years or so, while Michael has been a cricket specialist – books, manuscripts and ephemera, with some publishing too – for almost as long.

It’s an Ashes summer of course and Jonathan’s gallery is within walking distance of the home of cricket at Lord’s.  Only one topic for an exhibition this week and next – The Noble Game of Cricket : A Celebration of Cricket and the Ashes.  An amazing display of material covering the entire history of the game.

Nigel Talbot (Grosvenor Prints), himself no slouch when it comes to sporting prints, is there.  It’s right up my street and all the more pleasurable to be in the company of old friends – and not just any old friends but people I’ve actually played cricket with in the long ago.  I start to reminisce, as old men do – “Do you remember”, I say to Jonathan and Nick, “that game we played down in Wimbledon …?”  We used to put together a very casual eleven of print and mapsellers once or twice a year, calling ourselves the Weak Impressions.  A term from print-selling, but an apt one.  We rarely won, but on that occasion in Wimbledon we did.  It’s a game that has grown and unfurled and blossomed in my mind over the years into one of the finest victories in the entire annals of the noble game.

The opposition, with seven or eight wickets still in hand, only needed a dozen or so runs to overhaul our somewhat meagre total and win the match.  But at that point Nick and I were brought on to bowl at either end (Jonathan would have been keeping wicket – and I’m pretty sure Nigel was there too).  The field came in to deny singles and wickets slowly started to fall. 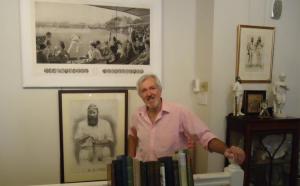 Nick and I wheeled away through a long summer evening – maiden after maiden – chipping away at the nerves of the batsmen.  The tension mounted as the wickets fell.  Only a handful of runs needed now.  But a final clatter of stumps and we’d done it – seven or eight wickets between us for as many runs.  My, but we bowled beautifully that day.

Ah – but the ashes of sporting memory.  Neither Jonathan nor Nick could remember a thing about it.  So now I’m wondering whether it happened at all anywhere outside my head.  Disillusion.  Disappointment.  But anyway I’d now bought a very nice little book and disproved the charge of having a day off. 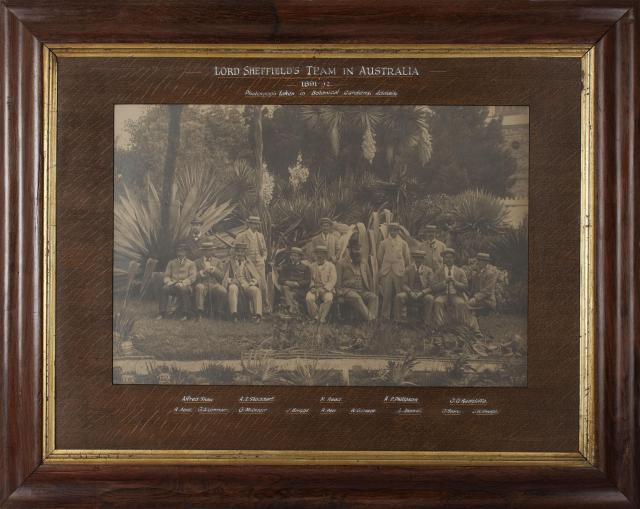 Of all the wonderful things on display – books, prints, paintings, photographs, letters, ceramics, bronzes, autographs and other memorabilia – the one I kept coming back to was this extraordinary and slightly surreal photograph of the England cricket team in the middle of a jungle.  Not in fact a real jungle – on closer inspection it turned out to be the Adelaide Botanical Gardens.  The touring party of 1891-1892 – and what a splendid group they were – names still famous well over a hundred years on, cricketing immortals.

There on the left the remarkable and occasionally chippy Alfred Shaw, here in a managerial role, but England’s best bowler in his day, the man who bowled the first ball in test-match cricket and was the first to take five wickets in a test innings.  To his right the dapper figure of Andrew Stoddart – “my dear victorious Stod” – blazing batsman and top scorer for the tourists in the tests.  He succeeded Grace as England cricket captain, having already captained the first British Lions rugby side in 1888 (a tour which he and Shaw helped organise) and the England rugby team in 1890.  Little Bobby Abel, “The Guv’nor” , who on this tour became the first England opener to carry his bat – in the second test in Sydney, making his highest England score of 132*.  George Lohmann – well, 112 test wickets at 10.76 and still the lowest strike rate (balls bowled between each wicket taken) in all test-match  history.  The wicket-keeper Gregor MacGregor – also a rugby international for Scotland – with his understudy, Hylton (“Punch”) Philipson.  Little Johnny Briggs, the left-arm spinner, the first bowler to take 100 wickets in tests – the leading English wicket-taker in the series, taking a hat-trick to finish the Australian second innings in Sydney.  Another fine left-arm spinner in Bobby Peel  and, dwarfing them both, the almighty W. G. Grace – already in his mid-forties, no longer bowling much, not quite at his peak with the bat on this tour, but still England captain and the most famous cricketer who ever lived. 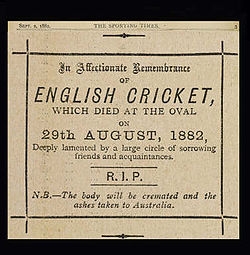 Despite so many worthies, England lost the series 2-1 to Jack Blackham’s Australians, failing to capitalise on a first innings lead at Melbourne and succumbing to Charlie “Terror” Turner in the fourth innings.  A similar story at Sydney – a first innings lead of over 150 tossed away – Turner again and George Giffen with six wickets in the final innings.  At last a chance to bat first in Adelaide – 134 to Stoddart, a fifty from Grace and a battling 83 from Peel – 499 all out.  Australia dismissed for 100 (Briggs 6-49, Lohmann 3-46) and invited to try again. Bowled out for 169 second time round (Briggs 6-87) – and England win by an innings and 230 – a thumping victory but too late to hold on to the Ashes.  Does the party look a little chastened in the photograph?

If you care about cricket – and you would probably not have read this far if you don’t – then do get along to this splendid exhibition (it’s on until 23rd July).  If you don’t, then find yourself a copy of Joseph O’Neill’s “Netherland” (a novel by an Irish-Turkish barrister about a Dutch banker playing cricket in New York) and read it very carefully.

Laurence Worms has owned and run Ash Rare Books since 1971. He represented the antiquarian book trade on the (British) National Book Committee from 1993 to 2002 and has been six times an elected member of the Council of the Antiquarian Booksellers’ Association. He was largely responsible for drafting the Association’s Code of Good Practice first introduced in 1997 (and its recent update), served as Honorary Secretary of the Association from 1998 to 2001 and as President from 2011 to 2013. He is a former member of the Council of the Bibliographical Society and continues to serve on the Council of the London Topographical Society. He writes and lectures on various aspects of the history of the book and map trades, and has lectured at the universities of Cambridge, London, Reading and Sheffield, as well as at the Bibliographical Society, the Royal Geographical Society, the Warburg Institute, the National Library of Scotland and at Gresham College and Stationers' Hall. He teaches annually at the London Rare Book School, University of London. Published work includes the compilation of fourteen ‘lives’ for the “Oxford Dictionary of National Biography”, a number of articles for “The Oxford Companion to the Book” and the chapter on early English maps and atlases for the fourth volume of “The Cambridge History of the Book in Britain”. Essays on the British map trade are also appearing in “The History of Cartography” published by the University of Chicago Press. His long-awaited “British Map Engravers”, co-written with Ashley Baynton-Williams, was published to critical acclaim in 2011. He also contributed the numerous biographical notes to Peter Barber’s hugely successful “London : A History in Maps”, co-published by the British Library and the London Topographical Society in 2012.
View all posts by Laurence Worms - Ash Rare Books →
This entry was posted in Book Collecting, Booksellers, Bookshops, Mapsellers and tagged Ashes, Boundary Books, Cricket, Jonathan Potter, Nick Potter, W. G. Grace. Bookmark the permalink.