Andrews of Durham – A Prize Binding

Bought for no more than the price of modest supper from the admirable Keel Row Bookshop a couple of weeks ago.   The book in itself not especially enticing – no more than a ‘Silver Library’ edition (1901) of that troubled, controversial, but once so universally read historian, James Anthony Froude (1818-1894) – a man who at once put more of his own feelings into his writing than a historian properly should, but yet also went back to the original sources in what was then a pioneering way.  Here on a favourite topic, “English Seamen in the Sixteenth Century” – Hawkins, Drake and the heroes of the battle against the Spanish Armada.  ‘Proper English history’ as I like to think of it – and here pretty much as it was still taught back in my schooldays.

What attracted me was neither the edition nor particularly the content (interesting as it is), but that it is a book with a complete narrative of its own – a copy with its own unique and definable history.  In a prize binding blocked on the upper cover with the shield of the Durham Training College for School Masters, also known as the College of the Venerable Bede and already then formally part of Durham University – and bound locally by Andrews of Durham.

An attractive binding – half calf, ruled, banded and worked in gilt and blind, red label, cloth sides, mainly blue and red marbled endpapers, blue and white silk headbands – conventional enough in design to be sure, save the slightly unusual colour – one of those faultline colours on the blue-green spectrum which you have to ask a woman to describe as the male eye generally can’t see it truly (something to do with the cone cells in the retina).  Anne says ‘peacock blue’ – which it is in the photograph, although to my eye much more green in real life.  Another slightly unusual feature (at least on a non-religious text) are the red edges all round – beautifully executed.  All carried out in good materials, with proper Oxford cloth for the sides.  It has exactly the right heft to the hand and ease of opening of a truly well-bound book.  And the quality shows – over a hundred years on and it’s still in excellent shape – the fugitive colour (whatever we call it) still unfaded.

Andrews of Durham – a new name to me and one evidently not widely known to the denizens of the interweb.  A single early twentieth-century plaquette binding in the British Library Database of Bookbindings, nothing much else in the obvious sources – and yet once a famous bookshop for the best part of two centuries and something of a landmark in Durham.  The British Book Trade Index and Peter Wallis’s supplement to C. J.  Hunt’s “The Book Trade in Northumberland and Durham to 1860” between them have some of the answers.  The firm was founded by the first George Andrews (1779-1832), bookseller, stationer, publisher, mapseller, printseller, bookbinder and music-seller, as early as 1808, originally (until 1823) in partnership with Francis Humble.  The premises were on Sadler Street – now known as Saddler Street but normally spelt with a single ‘d’ in the nineteenth century – right in the heart of Durham.

On his death in 1832, the business was taken over by his widow, Frances Andrews (1779-1867), whose 1835 “Catalogue of Books in Various Languages Now on Sale by Frances Andrews, Bookseller, Binder and Stationer, Durham” survives in  the Durham County Record Office (along with other material relating to the family and the business).  At some point after 1851, at which date she was still very much in charge of the business, she made way for their son and her former assistant, the second George Andrews (1814-1861).  On his death in 1861, Frances Andrews, now in her eighties, still in Sadler Street, took the helm once more.  In that year she was employing five men and two apprentices and the business was evidently substantial.  In 1863 her daughter, also Frances Andrews (1811-1897), previously a governess, married the widowed Londoner John Henry Le Keux (1812-1896), a well-known engraver who could meet even the exacting standards of his friend John Ruskin and who had worked on both “The Stones of Venice” (1851-1853) and “Modern Painters” (1855-1860).

When Frances Andrews died at the age of  eighty-eight in 1867, it was Le Keux who took over the running of the business, continuing both to paint and engrave in his spare time.  A few months before his own death in 1896, the business was sold to his manager, Warneford (or Warnford) Smart (1865-1965), the son of a Gloucestershire baker and at one time a librarian in Guildford.   Under Smart, according to the “Publishers’ Circular” of January 1909 (reporting on the firm’s recent centenary dinner), the business had grown considerably, “necessitating the removal to larger and more convenient premises [farther along Sadler Street], and even still further extensions until at the present day it may truly be considered one of the finest businesses in the North of England”.   And so it was: the firm were official booksellers and publishers to Durham University, publishers of the university calendar and examination papers, and publishers for the Surtees Society.  Andrews & Co. were also the manufacturers and suppliers of Le Keux’s Sweet Gum, “most useful for mounting photographs” and “sold by all stationers in bottles for 1s. each”.  The business expanded into records and leather goods as well as books, and offered a coffee-shop which became a favourite meeting-place for the citizenry.  It survived on even after Smart’s death at the age of 100 in 1965, at least until the early 1970s, known in its prime simply (from at least 1932) as the “The House of Andrews”.

As to the anonymous workers who must have produced this binding – of all the bookbinders living locally in Durham listed on the 1911 Census, the following were of an age to have been possibly working for Smart ten years earlier: George Bailes, Harry Herbert, Charles Hollis, Thomas Hopewell, George Kerr, William Leasdale, Ernest Lee, John Noble,  Thomas Ramsden, Thomas Henry Smith and Catherine Smith.  So – take your pick – probably one or more of them. 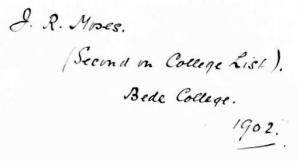 The book’s narrative does not of course end with the binding.  This was a prize binding for presentation and we know who won the prize.  A neat inscription gives us “J. R. Moses. (Second on College List).  Bede College.  1902”.   This  was John Robert Moses (1880-1917) – the twenty-two year old son of a coal-miner from the pit village of Tursdale, a few miles south of Durham.  He was still living at home with his parents at this date and, looked at in this light, you can almost feel the book radiating a sense of their parental pride at the achievement of their son.  We can readily imagine this beautiful book sitting as something of an object of wonder in their necessarily modest pit cottage.

In 1907 John Robert Moses married Jane Bormond Hutton (1868-1952) at Sunderland.  His wife was herself a teacher and the daughter of a local ship’s captain.  By 1911 they were living at 4 Guisborough Street, Sunderland, together with a rather formidable looking mother-in-law (yes, this really is Ann Bormond Hutton) – Moses by now teaching at a local elementary school.   No doubt the book remained in Sunderland with Jane Moses throughout the thirty-five years of her widowhood as a memento of her lost young husband.  The kind of book I very much like – a book on which to hang a story.  A fragment of a lost era.  A fragment of lost lives.  A survival from a city’s past.  And the sort of book it is still possible to collect for inexplicably little money.

Laurence Worms has owned and run Ash Rare Books since 1971. He represented the antiquarian book trade on the (British) National Book Committee from 1993 to 2002 and has been six times an elected member of the Council of the Antiquarian Booksellers’ Association. He was largely responsible for drafting the Association’s Code of Good Practice first introduced in 1997 (and its recent update), served as Honorary Secretary of the Association from 1998 to 2001 and as President from 2011 to 2013. He is a former member of the Council of the Bibliographical Society and continues to serve on the Council of the London Topographical Society. He writes and lectures on various aspects of the history of the book and map trades, and has lectured at the universities of Cambridge, London, Reading and Sheffield, as well as at the Bibliographical Society, the Royal Geographical Society, the Warburg Institute, the National Library of Scotland and at Gresham College and Stationers' Hall. Published work includes the compilation of fourteen ‘lives’ for the “Oxford Dictionary of National Biography”, a number of articles for “The Oxford Companion to the Book” and the chapter on early English maps and atlases for the fourth volume of “The Cambridge History of the Book in Britain”. Essays on the British map trade are also appearing in “The History of Cartography” published by the University of Chicago Press. His long-awaited “British Map Engravers”, co-written with Ashley Baynton-Williams, was published to critical acclaim in 2011. He also contributed the numerous biographical notes to Peter Barber’s hugely successful “London : A History in Maps”, co-published by the British Library and the London Topographical Society in 2012.
View all posts by Laurence Worms - Ash Rare Books →
This entry was posted in Book Collecting, Bookbinders, Booksellers, Bookshops and tagged Andrews & Co., Bede College, Durham, Durham Training College, Frances Andrews, George Andrews, House of Andrews, James Anthony Froude, John Henry Le Keux, John Robert Moses, Prize Bindings, Warneford Smart. Bookmark the permalink.

1 Response to Andrews of Durham – A Prize Binding