Friends in the North 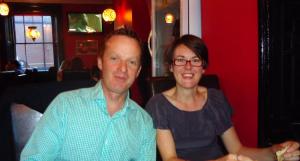 A very pleasant night out in Newcastle a couple of weeks ago with Mr & Mrs Keel Row Bookshop – also known as Anthony Smithson and his wife Alice.  A Turkish supper in the lee of the mighty football stadium – good food and good company.  And, in Alice’s phrase, Newcastle seems to be the capital of still-cheap eating-out.  Anthony was of course full of news on the build-up to the inaugural York Antiquarian Book Seminar (YABS) next month.   Almost fully booked, it is all shaping very well indeed – driven along of course by Anthony’s own dynamic enthusiasm.  It simply wouldn’t be happening without him.  Alice is very much looking forward to it as well – the children are to be consigned to grand-parental custody for that week.

Anthony still can’t quite believe that all – yes, all – each and every one of his first-choice speakers for the course has agreed to turn up.  He regards it as a promoter might in having lined up a stellar cast.  Unwonted hyperbole for the rare book trade, perhaps – stellar is not, frankly, a word we regularly use of our colleagues – but looking at the faculty on the YABS website (in absolutely strictly alphabetical order) – Simon Beattie, Nigel Burwood (Any Amount of Books), Justin Croft, Adam Douglas of Peter Harrington Rare Books, Jonathan Kearns (Adrian Harrington Rare Books), Ed Maggs of Maggs Bros., Tim Pye (Curator of Printed Literary Sources 1501-1800 at the British Library), Sophie Schneideman,  Anthony himself, and Carl Williams, also of Maggs, together with the two guest speakers from the USA, Rob Rulon-Miller and Lorne Bair – it’s very difficult to disagree.  These are all outstanding booksellers, genuine stars of the book trade, and, just as impressively, drawn from right across the breadth and depth of the trade on all its levels, in all its many aspects and differing ways of doing things.

Just from the sections of the course handbook which have recently been passed to me by editor-in-chief Charles Cox for comment I can tell how good it is going to be.  If only this kind of advice and guidance had been available when I was starting out as a bookseller all those years ago.  If only!   All those years of learning things the hard way, all that learning by trial and error (almost entirely error) – so much of it could have been avoided or short-circuited with the kind of generosity the trade is now showing in putting on this kind of course.  So good is it going to be that I’m tempted to sign up myself (never entirely too old to learn – and we could all learn from this, however long we have been at it), except that I wouldn’t want to deprive a young bookseller or a would-be bookseller of the opportunity.  Last I heard there were just a couple of places left for this year.  Get there if you can – you will not regret it – all the details are on the YABS website (link in the blog-roll).

The God of the Tyne

What I hadn’t previously realised about Anthony was how engrossed he is not just in the book world but in his own local community.  Not only does he run a bookshop and run around the country exhibiting at fairs, but he seems to be involved in just about everything happening on Tyneside.  Where he finds the time I have no idea.  One particularly entertaining story was about how he tracked down an early nineteenth-century wooden figurehead of the God of the Tyne, replete with a head-dress of flaming coals, pick and shovel, fish, nets and other items evoking local history and tradition.  The figurehead has very strong connections with the history of the local printing industry and now quite properly adorns and presides over the sparkling new Newcastle City Library – thanks almost entirely to Anthony’s efforts.

The following morning, Anne went to pay homage to the River God (the photograph from her) and to explore that great and welcoming city of the north.  Meanwhile, I took myself out to North Shields to have a rummage around Anthony’s shop.  It was pretty busy for a Friday morning, people popping in and out, buying books, offering books, debating books.   Anthony gives a lesson to us all in being charming, attentive, patient and helpful to anyone and everyone.   At one point he scurried off to try and find a book for someone.  In his absence, she turned to another customer and said, “Isn’t this a wonderful shop?” – “Aye”, came the reply, “I don’t know anywhere else like this”.  They were right: it is a wonderful, wonderful, shop.  Although crammed to the rafters with books, it remains orderly and tidy.  Although full of books, there is barely a book which doesn’t look interesting on one level or another: books for the collector, certainly, but also second-hand books for the casual reader, books for the serious reader, books for the old, books for the young, books on every subject you can think of (and quite a few you can’t) – above all, books you would like to read or just to give to someone you know who would.  I found myself saying to myself like a mantra as I went round: That looks interesting, that looks interesting, that looks interesting, that looks interesting …  And better still, all reasonably priced.  A reminder of just how wonderful a good bookshop can be.

I plucked out a boxful – mainly for stock, including one in a binding by Andrews of Durham which will probably feature here on the blog at some point, but a few others simply to read or pass on to friends.  A marvellous  shop.  A marvellous evening.  A marvellous morning.  Thank you, Anthony and Alice.

Laurence Worms has owned and run Ash Rare Books since 1971. He represented the antiquarian book trade on the (British) National Book Committee from 1993 to 2002 and has been six times an elected member of the Council of the Antiquarian Booksellers’ Association. He was largely responsible for drafting the Association’s Code of Good Practice first introduced in 1997 (and its recent update), served as Honorary Secretary of the Association from 1998 to 2001 and as President from 2011 to 2013. He is a former member of the Council of the Bibliographical Society and continues to serve on the Council of the London Topographical Society. He writes and lectures on various aspects of the history of the book and map trades, and has lectured at the universities of Cambridge, London, Reading and Sheffield, as well as at the Bibliographical Society, the Royal Geographical Society, the Warburg Institute, the National Library of Scotland and at Gresham College and Stationers' Hall. Published work includes the compilation of fourteen ‘lives’ for the “Oxford Dictionary of National Biography”, a number of articles for “The Oxford Companion to the Book” and the chapter on early English maps and atlases for the fourth volume of “The Cambridge History of the Book in Britain”. Essays on the British map trade are also appearing in “The History of Cartography” published by the University of Chicago Press. His long-awaited “British Map Engravers”, co-written with Ashley Baynton-Williams, was published to critical acclaim in 2011. He also contributed the numerous biographical notes to Peter Barber’s hugely successful “London : A History in Maps”, co-published by the British Library and the London Topographical Society in 2012.
View all posts by Laurence Worms - Ash Rare Books →
This entry was posted in ABA, Book Collecting, Booksellers, Bookshops and tagged Anthony Smithson, Charles Cox, Ed Maggs, Jonathan Kearns (Adrian Harrington Rare Books), Keel Row Bookshop, Newcastle upon Tyne, Nigel Burwood (Any Amount of Books), Sophie Schneideman, York Antiquarian Book Seminar. Bookmark the permalink.

1 Response to Friends in the North