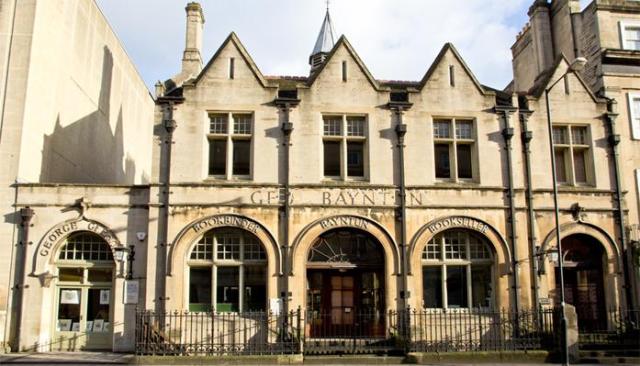 A very pleasant afternoon out in Bath last week – an outing with a group of rare book librarians for a special behind-the-scenes tour of the famous Bayntun-Riviere bindery at George Bayntun’s on Manvers Street.  The tour was arranged as part of an ongoing let’s-get-to-know-each-other-better series of exchange visits between the booksellers of the ABA and the librarians of the Rare Books and Special Collections Group of the Chartered Institute of Library and Information Professionals (CILIP).

Whatever we call them, there were around fifteen on the visit and before too long they were being handsomely entertained by Ed Bayntun-Coward with an inimitable fund of entertaining bookshop anecdote, some mild indiscretions concerning past customers (generally in the ‘persons of note’ category), and some glimpses into the long, rich and still evolving history of the Bayntun firm.

The firm of course still incorporates large elements and living traditions of the businesses of both the great nineteenth-century bookbinder Robert Riviere (1808-1882) and the great Bath bookseller George Gregory (for whom see the post on George Gregory of Bath elsewhere on the blog).  And Ed comes up with some interesting thoughts too on the changing nature of the book-trade and the gradual transition of Bayntun’s from a fulcrum for selling to nowadays a fulcrum for buying. 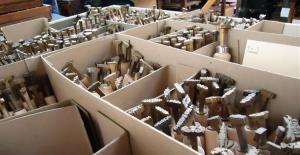 The bindery is a remarkable place – in a remarkable building (originally designed as a sorting office for the western mail).  The binding work is still all done by hand. The finishing executed with the aid of an unrivalled collection of tools (at least 15,000), some dating back to the eighteenth century and many still used on occasion.

I can recall with delight the firm once repairing a nineteenth-century Riviere binding for me using Riviere’s own tools – exactly the same tools with which the binding had been first decorated a hundred years or more earlier.

We are introduced in turn to all the many separate forwarding and finishing tasks of the bindery, all the pressing and sewing, all the different materials, all the technicality and precision, and all the unexpected complexities of organising the work-flow.  If Bayntun bindings seem expensive at first glance, they start to look like an absolute bargain when you factor in all the time, skill, craft and incredible care with which they are fashioned.

Delights abound.  In one corner some boxes of tools specially made for William Morris long ago. How satisfying is that?

And here on a bench is a work in progress destined to appear in a well-known (a very well-known) television series at some point – sworn to secrecy on that.  And then in another corner, bathed in natural light, Tony Evans, the senior finisher, brings out a tour-de-force of the finisher’s art.  How long did that take him? – many, many hours, but Ed assures us that there is no better, more accurate or speedier craftsman in the country.

The afternoon breaks up, the librarians depart to revisit their collections with fresh and better eyes, and I manage to find a couple of books to buy to round off a delightful day – including an early Tennyson published by my very great hero of the nineteenth-century book-trade, Effingham Wilson (1785-1868). 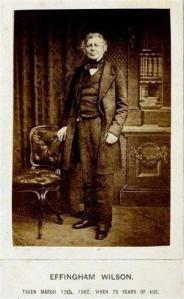 A vocal champion of a free press – “It is like the air we breathe: if we have it not, we die”, a prime mover in the cause of popular education, contending that every child should “have that given to it which nobody can take away”, Wilson was a precursor of mine at the Royal Exchange.  I used to walk past his old shop every day.  When I wrote his life over twenty years ago for the Missing Persons volume of the Dictionary of National Biography it took hours, days, weeks and months of visits to distant archives to tease out the barest bones and basic outlines of his life.  Too many headache-inducing hours of microfilm and microfiche.  Too many hours of figuring out the arcane indexing of the old National Record Office and the labyrinthine byways of Somerset House. Too many hours in a draughty hangar of an archive somewhere rural in the north of England.  Nowadays you can find out all I found out then (and probably a great deal more) in under an hour on the internet – that pamphlet I never could find – now digitised and online – that photograph I knew of but never saw – digitised and online.  Here it is.  Research has changed forever, as has so much else – but bookbinding the Bayntun-Riviere way has not.  It’s very much alive and thriving in Bath.

Laurence Worms has owned and run Ash Rare Books since 1971. He represented the antiquarian book trade on the (British) National Book Committee from 1993 to 2002 and has been six times an elected member of the Council of the Antiquarian Booksellers’ Association. He was largely responsible for drafting the Association’s Code of Good Practice first introduced in 1997 (and its recent update), served as Honorary Secretary of the Association from 1998 to 2001 and as President from 2011 to 2013. He is a former member of the Council of the Bibliographical Society and continues to serve on the Council of the London Topographical Society. He writes and lectures on various aspects of the history of the book and map trades, and has lectured at the universities of Cambridge, London, Reading and Sheffield, as well as at the Bibliographical Society, the Royal Geographical Society, the Warburg Institute, the National Library of Scotland and at Gresham College and Stationers' Hall. He teaches annually at the London Rare Book School, University of London. Published work includes the compilation of fourteen ‘lives’ for the “Oxford Dictionary of National Biography”, a number of articles for “The Oxford Companion to the Book” and the chapter on early English maps and atlases for the fourth volume of “The Cambridge History of the Book in Britain”. Essays on the British map trade are also appearing in “The History of Cartography” published by the University of Chicago Press. His long-awaited “British Map Engravers”, co-written with Ashley Baynton-Williams, was published to critical acclaim in 2011. He also contributed the numerous biographical notes to Peter Barber’s hugely successful “London : A History in Maps”, co-published by the British Library and the London Topographical Society in 2012.
View all posts by Laurence Worms - Ash Rare Books →
This entry was posted in ABA, Book Collecting, Bookbinders, Booksellers, Bookshops, Libraries and tagged ABA, Bath, Bayntun-Riviere, Bookbinding, CILIP, Ed Bayntun-Coward, George Bayntun. Bookmark the permalink.