After waiting at King’s Cross for a considerable amount of time for our train to arrive (first blamed on a ‘terrorist threat’, later referred to simply as ‘an incident’, and eventually on ‘a person on the track’), we finally arrived in York around supper time on Sunday. 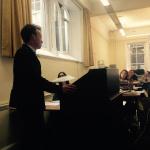 We were expected at the Bar Convent at 8.30am the following morning, where we were greeted to YABS 2015 by the lovely Alice Laverty (Mrs Keel Row Bookshop). The day started with an introduction by the faculty,  which consisted of Jonathan Kearns, Anthony Smithson, Simon Beattie, Justin Croft, Sophie Schneideman and the keynote speaker, Sally Burdon.

Day One was largely dedicated to teaching us about how to run a business, entrepreneurship and financial know-how, but we ended the day with Simon and Justin introducing us to the finer points of bibliographical description. The next morning we picked up where we left off and after a couple of hours we were given books to catalogue ourselves.

I was given a very interesting copy of “The Ballad of Reading Gaol” by Oscar Wilde. As this edition was printed on the recto of the leaves only, I was having quite some trouble paginating it. Even the Guvnor’s amazing “Cataloguing for Booksellers” booklet could not offer help [oops! – he’s just e-mailed me back telling me to look at p.34]. Someone had also rubbed out the second edition statement, making it look like a first edition. Quite the challenge!

After all this hard work we could sit back and enjoy Sally Burdon’s story of how she became a bookseller and all about how she runs her Asia Bookroom bookshop in Australia. This was followed by a talk by Tim Pye, Curator of Printed Literary Sources 1500-1801 at the British Library, with Simon Beattie, on the relationship between booksellers and institutional libraries. Turns out, they actually do like each other! After a break, Anthony Smithson shared his experiences of going to bookfairs and running real bookshops, after which we actually got to see a number of antiquarian bookshops in York during an evening tour. The tour took in a very enjoyable look at Janette Ray’s shop, with a glass of wine (note to other shops): we had already met Janette earlier in the day when she gave us a talk about dealing in the visual arts, her background in landscaping, and her specialisation in books on art, architecture, etc.

I didn’t know York had so many bookshops. Apart from the ones we actually got to visit, we passed many more on our tour. At every shop we were given about twenty minutes to have a look around. Our group of twenty-seven students plus faculty members swarmed inside the tiny shops like ants, although I guess we were more like moths drawn to a flame. It was a smart move on someone’s part to show this many booksellers, librarians and other assorted bibliophiles these bookshops – many books were bought.

The day concluded, as was becoming quite the habit by then, at the House of Trembling Madness – a tiny pub above a beer shop. Not sure if the pub lived up to its name, or if it was the beer, or the many examples of taxidermy on the walls, but it did not take long for our imaginations to run wild. Putting our lessons to use, we came up with entrepreneurial plans involving systems, brand new specialities and whole new techniques of bookselling.

Our third and final day opened with a lecture by Sophie Schneideman on the Art of the Book. She talked about different techniques of printing and illustration, different bindings and a little bit on paper types.

Next was our first guest speaker of the day: Adam Douglas (of Peter Harrington) talked about Fakes, Forgeries and Theft, and showed us some examples that he had had to deal with during his career, such as forged signatures of Winston Churchill and Virginia Woolf, to the tale of someone who had produced an entirely faked-up copy of a book (including the binding).

During the afternoon, Nigel Burwood (Any Amount of Books) gave a highly amusing talk about how (not) to be a successful bookseller, while Ed Maggs (Maggs Brothers) showed us the ins and outs of cataloguing an archive. The honour of the final talk was given to Jonathan Kearns who gave the third and final instalment of his lectures on postmodern bookselling, giving us many useful tips on social media and how they can help you find more customers and followers.

After an open forum, we wandered down to a Greek restaurant where we continued our discussions over dinner. For those who did not catch a train home on Wednesday evening, a tour of the Minster Library was organised for Thursday morning. This beautiful library is able to continue to exist with the help of York University. The collections include many old manuscripts, although the special display the curator had put on for us was mainly of printed books. 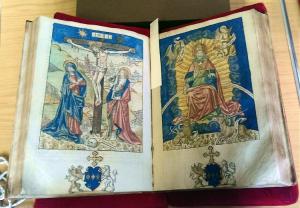 We began with some of the earliest printed books in their collection and continued into the modern era. We were shown some wonderful things, such as a small religious book owned by Katherine of Aragon, a Kelmscott Press book, some pamphlets advertising shows with lions and flying men, a bundle of letters in a satchel, and so much more.

So many thanks to all those who have helped organise this event. It has been a thrilling few days. Not only have I learned a lot about what it means to be a bookseller, but also (hopefully) how to run a successful business. I now feel so much more confident in my developing skills.

P.S. I’ll see you all at the York National Book Fair on Friday and Saturday.

Laurence Worms has owned and run Ash Rare Books since 1971. He represented the antiquarian book trade on the (British) National Book Committee from 1993 to 2002 and has been six times an elected member of the Council of the Antiquarian Booksellers’ Association. He was largely responsible for drafting the Association’s Code of Good Practice first introduced in 1997 (and its recent update), served as Honorary Secretary of the Association from 1998 to 2001 and as President from 2011 to 2013. He is a former member of the Council of the Bibliographical Society and continues to serve on the Council of the London Topographical Society. He writes and lectures on various aspects of the history of the book and map trades, and has lectured at the universities of Cambridge, London, Reading and Sheffield, as well as at the Bibliographical Society, the Royal Geographical Society, the Warburg Institute, the National Library of Scotland and at Gresham College and Stationers' Hall. Published work includes the compilation of fourteen ‘lives’ for the “Oxford Dictionary of National Biography”, a number of articles for “The Oxford Companion to the Book” and the chapter on early English maps and atlases for the fourth volume of “The Cambridge History of the Book in Britain”. Essays on the British map trade are also appearing in “The History of Cartography” published by the University of Chicago Press. His long-awaited “British Map Engravers”, co-written with Ashley Baynton-Williams, was published to critical acclaim in 2011. He also contributed the numerous biographical notes to Peter Barber’s hugely successful “London : A History in Maps”, co-published by the British Library and the London Topographical Society in 2012.
View all posts by Laurence Worms - Ash Rare Books →
This entry was posted in Book Collecting, Booksellers, Bookshops, Libraries, Seminars and tagged Adam Douglas, Alice Laverty, Anthony Smithson (Keel Row Bookshop), Ed Maggs, Janette Ray, Jonathan Kearns, Justin Croft, Nigel Burwood (Any Amount of Books), Pauline Schol, Sally Burdon (Asia Bookroom), Simon Beattie, Sophie Schneideman Rare Books, Tim Pye, York, York Antiquarian Book Seminar, York Minster Library. Bookmark the permalink.