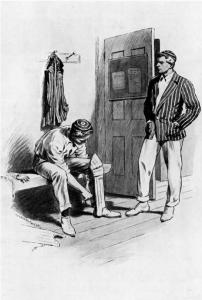 Half-awake, fogged in toothache, I listened on the radio the other morning to the England cricket team ritually eviscerate itself either side of tea in Chennai.  Life far from a bowl of cherries.  The only redeeming feature was the wit, banter, reminiscence, commentary and analysis from the Test Match Special team, and especially the intelligent, articulate and ever-interesting thoughts of Ed Smith, former Middlesex captain turned writer and journalist.

Perhaps it was the coincidence of names, perhaps the fact that the plot turns (very loosely) on an English cricket tour abroad, but it reminded me I had to catalogue and quote a newly arrived copy of P. G. Wodehouse’s “Psmith : Journalist” (1915).  A relatively straightforward task, although the book’s relationship with “The Prince and Betty” (1912) needs a little untangling:  the serialisation of “Psmith : Journalist” in “The Captain” between October 1909 and March 1910 plainly predates both the 1912 British and American book editions of “The Prince and Betty” – which vary greatly from each other – and its own serialisation in “The Strand” (February-April 1912), so it is a little perverse to regard the Psmith book, as many commentators seem to do, as a revised and rewritten version of a revised and rewritten version of itself – it’s the earliest version and in any case, as David A. Jasen commented in his bibliography, it is “the best version of the three”.

Those other Wodehouse bibliographers, Eileen McIlvaine and her co-authors, citing Charles Gould, note a tiny variation in the height of the publisher’s name on the spine, oddly referring to this as “two states of the first issue”, although nowhere else referring to any kind of point of issue or any kind of second issue.  No evidence is adduced for regarding one variant as earlier than the other, but no doubt a bookseller or a collector somewhere will be trying to make something of it.

These hazards navigated, I wanted to add a note on the illustrator, T. M. R. Whitwell.  Apart from the present title, he illustrated quite a number of Wodehouse’s earliest books: he was one of the illustrators of “Tales of St. Austin’s” (1903) and then the sole illustrator of “The Gold Bat” (1904); “The Head of Kay’s” (1905); “Mike” (1909) and “Psmith in the City” (1910). He also illustrated virtually all of Wodehouse’s numerous stories for “The Captain” between 1902 and 1911, including the original 1905-1906 illustrations for the serialisation of “The White Feather”, not ultimately used in the book edition in 1907.  He was very much the man who defined the look and feel of one of our most abidingly popular novelists at the outset of his career.  Easy enough to look him up – his full name, his dates – one might have thought – but, no – beyond tabulating his input, the bibliographies are silent.  The half dozen standard reference books I consulted do not even mention him.  How can this be?  The man who illustrated most of those early Wodehouse school stories and we don’t even know who he was? 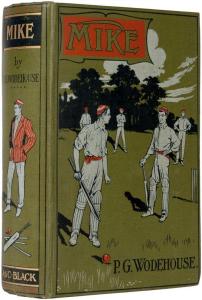 The internet is strangely silent, although I did stumble upon the interesting “Annotated Psmith Project” (link in the blog-roll), which displays a lot of his work, but only refers to him as the “mysterious” T. M. R. Whitwell.  Beyond that, there is only a note of the 1966 verdict of Richard J. Voorhees: “The illustrations [in Wodehouse’s school novels] are atrocious.  Once they must have attracted readers; today they could only repel or amuse … they make the schoolboys look at least thirty years old; one character, who wears glasses, looks fifty”.

Well – I take his point (up to point) – but I think in looking at the evidence of old photographs we have to recognise that, in an era before antibiotics, people did age considerably more quickly than they do now, or perhaps it was just that, in a more manly age, young men became manlier sooner.  Whitwell was plainly a highly accomplished illustrator.

Elsewhere, the blog of the Essex Record Office reproduces this delightful sketch and asks, “Can anyone identify T. M. R. Whitwell … Is this the same Whitwell who illustrated the works of P. G. Wodehouse?”  Well, yes, indeed it is – and I imagine that the sketch has something to do with the illustrations Whitwell contributed to “The ‘Cycling’ Album : Being a Selection of Sketches form [sic] ‘Cycling’, Some Satirical, Some Humorous, Some Serious, and all Artistic, Limned by Such Masters of Cycling Art as George Moore, Percy Kemp, T. M. R. Whitwell”, published in London by the Dangerfield Printing Company in 1893.

Whitwell’s first major book commission was in providing the 100 or so illustrations for R. Andom’s “Industrial Explorings in and around London” (1895) – author and artist portrayed on the cover.  It’s a favourite of mine – “If you can’t go to Kamtschatka, go to Kentish Town and describe that” – a whimsical exploration of the strange worlds-within-worlds of the manufacturing regions of Victorian London – Piano-Land, Rope-Land, Tram-Land, Candle-Land, Gas-Land, Paper-Land, Soap-Land, Mineral-Water-Land, Match-Land, Rubber-Land, Wire-Land and Sweet-Land.  If you don’t know “R. Andom” (Alfred Walter Barrett, 1869-1920) and have a taste for humour in the vein of Jerome K. Jerome’s “Three Men in a Boat”, then I can thoroughly recommend.

Whitwell also illustrated R. Andom’s “On Tour with Troddles” (1909), so at that point in time we have him concurrently illustrating two of our finest humorists – extraordinary that the world seems not quite to know who he was.  As it happens, the answer I was looking for was there all along in my own archive – identified as Thomas Montague Radcliff Whitwell (1868-1928) the last time I catalogued a copy of the “Industrial Explorings”.

Very brief outline details of his life and career are in fact available online (by subscription) via the “Artist Biographies” website, but to add a little more to that record, his birth was registered at Hackney in the third quarter of 1868.  He was the son of Thomas Whitwell, a solicitor’s clerk, and his second wife, Eliza Birt, who had married in 1865 – she was presumably a sister or cousin of his first wife, Marian Birt, whom he had married five years and two children earlier.  The young Whitwell seems to have been called Montague in the family and he himself seemed to favour the spelling Radcliff rather than Radcliffe for his second middle-name.

We catch a glimpse of him as a young man, described as a lithographic artist, boarding at the Swan Inn at Doddinghurst in Essex (an easy bicycle ride from Chipping Ongar) in 1891. After the death of his father in 1894, he married Sarah Jane Hanson Southan (1875-1939) at Hastings on 30th April 1896.  She was the daughter of Thomas and Elizabeth Ellen Southan, who owned and ran the Washington Hotel at Hastings – her father, described as a civil engineer on the marriage certificate, having died in 1889. 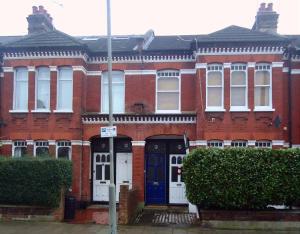 The marriage seems not to have prospered.  By 1901, the census return suggests that Sarah Whitwell was back in Hastings, helping her mother and sister out at the hotel.  She filed for divorce in 1910 on the grounds of adultery and desertion, her divorce papers stating that Whitwell was now cohabiting with a woman called Olive Henderson in Mantilla Road in Tooting – just the other side of the common from where I sit.  By the following spring, Whitwell and Olivia Philippa Henderson (1869-1955), to give her correct name, were living in Tabley Road, Holloway, with their infant son – also Thomas Montague Radcliff Whitwell (1911-1983). Olivia was the daughter of a London coach-painter and the couple were married in 1912, after the divorce was finalised.

Whether the divorce had any impact on his career is difficult to say – in those far-off days a century ago it may conceivably have done.  Certainly Whitwell seems never to have worked with authors of the celebrity of Wodehouse or even R. Andom again, but I suspect it may more probably have been a matter of his style of work becoming outmoded.  He continued to illustrate the school stories of R. S. Warren Bell, editor of “The Captain”, at least until “The Three Prefects” came out in 1918.  He also illustrated similar school tales at this period by F. Cowley Whitehouse, John Barnett, M. M. Guy, Ascott R. Hope, Frank Elias, Harold Avery, and especially R. A. H. Goodyear, continuing to produce illustrations on into the 1920s.  He died at Northampton, aged just fifty-nine, in 1928.

Postscript December 2017:  For much more on Whitwell, there is now an excellent account by Robert Kirkpatrick on the Bear Alley blog – https://bearalley.blogspot.co.uk/search?q=whitwell – a blog also well worth searching for a great deal of similar material.

Laurence Worms has owned and run Ash Rare Books since 1971. He represented the antiquarian book trade on the (British) National Book Committee from 1993 to 2002 and has been six times an elected member of the Council of the Antiquarian Booksellers’ Association. He was largely responsible for drafting the Association’s Code of Good Practice first introduced in 1997 (and its recent update), served as Honorary Secretary of the Association from 1998 to 2001 and as President from 2011 to 2013. He is a former member of the Council of the Bibliographical Society and continues to serve on the Council of the London Topographical Society. He writes and lectures on various aspects of the history of the book and map trades, and has lectured at the universities of Cambridge, London, Reading and Sheffield, as well as at the Bibliographical Society, the Royal Geographical Society, the Warburg Institute, the National Library of Scotland and at Gresham College and Stationers' Hall. Published work includes the compilation of fourteen ‘lives’ for the “Oxford Dictionary of National Biography”, a number of articles for “The Oxford Companion to the Book” and the chapter on early English maps and atlases for the fourth volume of “The Cambridge History of the Book in Britain”. Essays on the British map trade are also appearing in “The History of Cartography” published by the University of Chicago Press. His long-awaited “British Map Engravers”, co-written with Ashley Baynton-Williams, was published to critical acclaim in 2011. He also contributed the numerous biographical notes to Peter Barber’s hugely successful “London : A History in Maps”, co-published by the British Library and the London Topographical Society in 2012.
View all posts by Laurence Worms - Ash Rare Books →
This entry was posted in Book Collecting, Cricket, Forgotten Artists and tagged Illustrators, P. G. Wodehouse, R. Andom, T. M. R. Whitwell, Thomas Montague Radclii Whitwell. Bookmark the permalink.